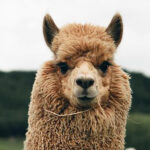 Have you perhaps been hearing about llama antibodies of late? The “nanobodies” that feature in the immune systems of camelids — camels, llamas, alpacas — inspired the development of a class of drugs that just might help us out of this mess.

Antibodies are proteins that float around in all of our bloodstreams, and represent a kind of distant early warning line for our immune system. Some of them are specific to a particular bacterium or virus that the body has once encountered, and some of them are “freelance” — created in a great profusion of varieties so that they might opportunistically disable some unknown invader.

Camelids have evolved an adjunct to the kind of antibodies that most mammals share. Millions of years ago they developed variant proteins that are an order of magnitude smaller. These molecules, discovered in the 1980s, are called nanobodies.

Scientists led by a group at the University of California at San Francisco started with a “library” of billions of varieties of synthetic versions of such nanobodies; they ran lab procedures that scanned the library to find ones that might be active against SARS-CoV-2. Two separate classes of nanobodies stood out in this process — they bind to the Covid-19 virus’s infamous Spike protein and disable it in two separate ways, so that the virus can’t infect human cells. The re­search­ers then engineered a molecule combining the methods of action of these two candidates and improving their efficacy by a factor of millions.

The resulting molecule, dubbed mNb6-tri, is among the most potent anti-SARS-CoV-2 agents ever dis­cov­ered, in a Petri dish. Therein lies the rub. In the lab the molecule blocks live SARS-CoV-2 virus from infecting cells, but it has not been tested in animals or in humans. Many drugs that show promise in vitro fail to display the same (or any) activity in vivo, in living beings.

The molecule the researchers ended up with would be easy and cheap to manufacture in mass quantities using e.coli or yeast as a “factory.” It is robust: the researchers tried heating it, aerosolizing it, and trans­forming it into a powder (in which form it could easily be shipped anywhere in the world), and it didn’t lose its potency.

The inventors have named the aerosol formulation “AeroNabs.” They envision it being sold in groceries and drug stores and inhaled at home — or on the job for at-risk health-care workers. Its co-inventor said: “Far more effective than wearable forms of personal protective equipment, we think of AeroNabs as a molecular form of PPE that could serve as an important stopgap until vaccines provide a more permanent solution to Covid-19.”

The team is in discussion with manufacturers who can bring AeroNabs to market quickly, even as they pursue animal and human testing.

Here are some resources if you want to explore more about this promising but still highly preliminary devel­opment. They are listed in increasing order of technical depth and the challenge they will impose upon your comprehension.

[ Note added 2020-08-28: ] The experts at TWiV (This Week in Virology) commented yesterday on the paper de­scribing the mNb6-tri molecule — watch for about a minute beginning at 1:51:52. TWiV regular Rich Condit notes, “I think the technology is fantastic, it’s the press release that’s twisting this into some amazing theorem.” He decries the fact that the aspect the national press picked up on, that of the AeroNabs nasal spray concept, has no real support in the scientific paper. Condit concludes: “One paper; different virus; animal models. I’m not buying stock in this yet.” Watch for a couple of minutes from 1:49:00.