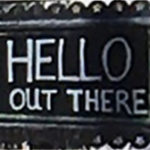 Walking in the neighborhood is different now in ways both obvious and subtle.

Many people are out and about. On a Tuesday afternoon, it’s not just the olds; it’s people of all ages and whole families too taking the air. There were not many blocks in which we were out of sight of other walkers. Also bike riders.

Now we are hyper-vigilant for other pedestrians and for folks in their yard or out on their stretch of sidewalk. We cross the street to avoid them. We pause while they cross in front of us, 10 feet away. We pause some more before crossing the path they took — in perhaps an overabundance of caution, but aerosol transmission of the virus apparently can happen.

We don’t stop to talk to dogs. There’s little or no danger of getting infected from a pet, from everything I read; but unless the dog’s person has let out 20 feet of line, we just don’t want to get that close. It all must be terribly confusing for these dogs who are accustomed to being social.

There are hardly any cars: a trickle on the major streets and almost none on the residential ones.

The sky is very blue. There are no low cirrus clouds. Remember after 9/11 how blue the sky was? Amateur astronomers reported some of the best seeing conditions in memory. The reason was that all commercial air traffic was immediately grounded and stayed out of the sky for four days. In this crisis, the number of planes in the air is down by 40 to 70 percent (I see various numbers), and this has been true for weeks. The atmosphere appreciates not having those thousands of tons of unburned hydrocarbons dumped into it daily.

Here are a few photos from our walk down to the river today. The incipient tulips and daffodils were the first spring green we have seen aside from the occasional tiny brave shoot of grass.