Minnesota has refined its pilot program for people over 65 to get access to far too few doses of vaccine. This week it’s a lottery. Last week’s first-come, first-served free-for-all resulted in several hundred thousand frustrated and disappointed Minnesotans (present com­pany very much included).

Note that this pilot program is separate from whatever allocations healthcare providers and other organizations get to cover priority groups 1-a and 1-b. I have heard several stories of people over 75, who are enrolled at Health Partners, being called to come in for a shot or going to their online portal and signing up. I have not heard similar stories about any other healthcare provider in the state. According to MPR News, “When the state opened up vaccinations to anyone age 65 and over, they did it so that providers who found themselves with extra doses of vaccine could make sure they use them.”

Lottery: For 24 hours beginning at 5:00 this morning, Minnesotans can put their name in a hat to participate in a random drawing for an appointment at one of nine vaccination sites around the state; I just successfully signed up myself and my wife. (For those without easy access to the internet, there is also a phone line — 833-431-2053 — that will be operating from 9:00 am to 7:00 pm today.)

The sign-up website is vastly improved from last week: instead of a bland, static notice from an un­re­sponsive server, visitors are now treated to a countdown of their place in the queue. That’s right, when you hit the link above you are in a waiting line for a chance at a random drawing. 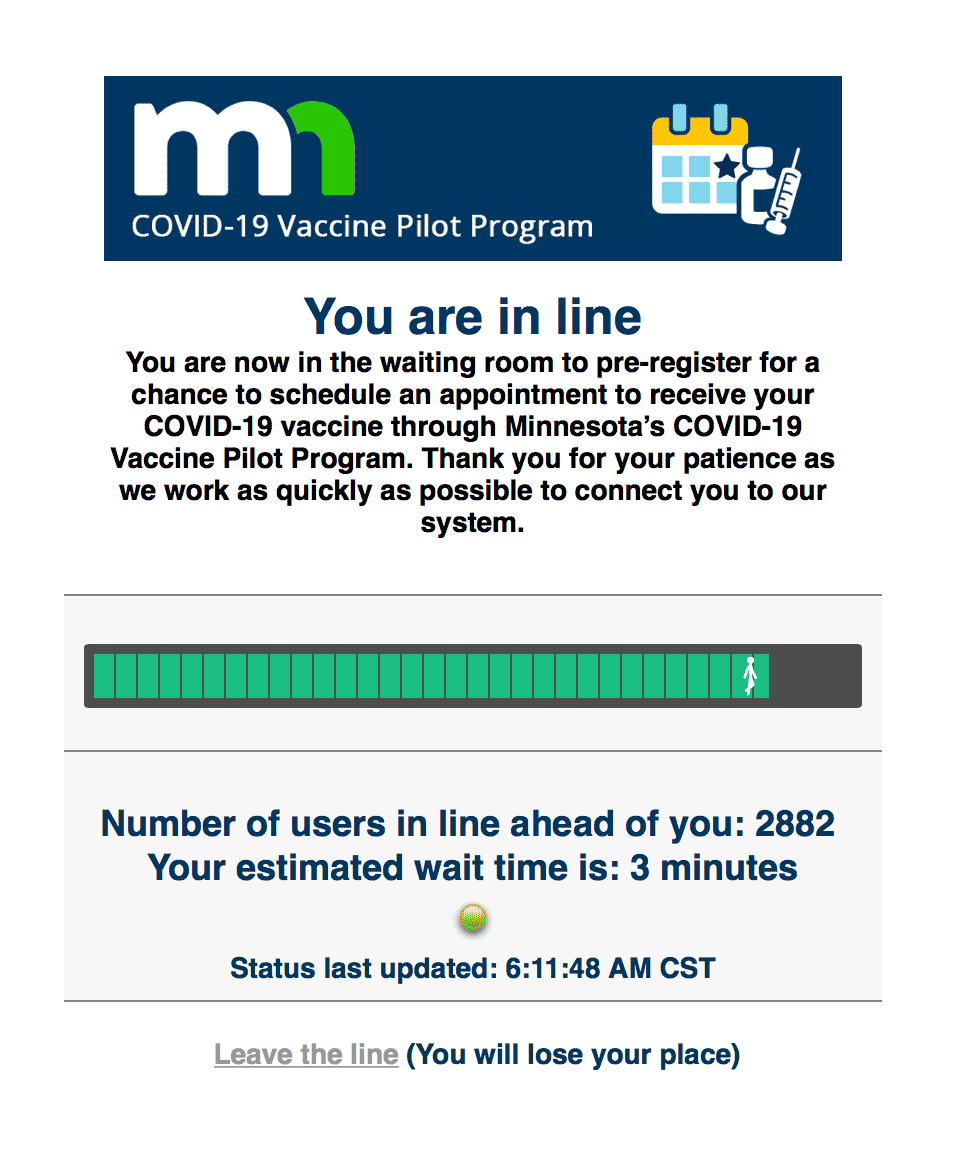 Beginning around 6:00 am, I rose to the top of the queue in about half an hour. I filled out personal and contact in­for­ma­tion. That’s when the real confusion began.

At the end of the information-gathering process, in­stead of a notice such as “your name is now in the hat,” I was presented with the list of nine locations. Each one I chose responded “No more appointments available at that location.” What?! I ended up choosing the nearest one and hitting Continue, and was then told I am on the waiting list. What?!?! No word of a lottery.

I believe that the state IT workers, under incredible time pressure, simply didn’t get around to updating the very end of the sign-up process. It looked just like it did last week.

So my name and my wife’s are now in the pool, I hope; we each got a confirming email and text message. But both read “You have been waitlisted,” and I simply have to hope that this is remnant wording from last week, and that there actually will be a drawing. If so, one or both of us may, or may not, get a call, text, or email tomorrow offering a signup for vaccination. The state has 8,000 doses available this week for the program.

People who last week managed to get on the (apparently limited) waiting list were rolled over into this week’s pool. Let’s guess that there were 100,000 of them. Let’s assume that 300,000 more people join the pool today. So this week each of us has about a 2% chance of getting a shot. If the pool keeps rolling over week to week, very soon it will consist of all eligible Minnesotans — about a million over age 65. The 8,000 doses available per week should (we hope) be in­creasing slowly. But for now it looks like this process is heading for a situation in which 65-and-older Minnesotans will have about a 0.008 chance of getting an appointment for vaccination, once per week.