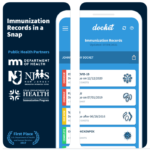 A growing number of venues — restaurants, bars, gyms, airlines — are or will be requiring proof of vaccination. To meet this need Minnesota uses a smart­phone app: Docket. Getting it talking to the state’s vaccination database can be challenging.

To prove vaccination status, you could carry around your vaccination card, but this is a non-starter: first of all, it’s the wrong size. Taking a photo of it and keeping it on your phone might work, if you can find that photo in the moment you need it. In some states (not this one!), Apple’s iPhone will eventually be able to store the owner’s authenticated proof of vaccination securely in its Wallet app. Other states support an app, either home-grown or commercially developed, to provide proof of vaccination on a smartphone. Minnesota is one of those.

Our app is called Docket; Minnesota, Utah, and New Jersey use it. The app (iPhone; Android) essen­tially ties the phone owner’s identity, in a not particularly secure manner, to their record in a state database that tracks vaccinations. In Minnesota this database is called MIIC, the Minnesota Im­mun­i­za­tion Information Connection, and it is run by the state health department.

I had not heard of Docket until my wife Katharyn and I went in for Pfizer booster shots. The pharmacist, John at Corner Drug in St. Paul, told us about it as he was entering our vaccination information into MIIC via the providers’ interface. Or trying to. My information went in fine, but John told us that my wife’s record was locked against updating by all but people inside our health system (M Health Fairview).

At home I began the process of getting Katharyn’s record accessible. First I called M Health and was transferred four or five times, waiting on hold for over an hour in total. No one seemed to know whose responsibility it might be to correct the problem. One person I talked to in this process said mine wasn’t the first call that day about a locked record. In the end I got nowhere: the call disconnected while on yet another hold.

Resolving to call back another day, I downloaded Docket onto my own phone and set it up with all my data. A person’s entry in MIIC is keyed off their full name (spelled exactly right), birth date, email, legal sex, and phone number. All this you enter into Docket, and if it agrees exactly with what is in MIIC, and you are using the phone whose number is on file there, your record will display.

Eventually I did manage to get all the details right and view my MIIC record — but the recent Pfizer booster was not in it. I called my patient pharmacist, John, and he said it can take a day or two for the update to appear. I tried again daily over the next week but the booster never showed up. Called John again; he looked via his interface and said that my MIIC record was in fact up-to-date. He suggested I delete the account I had created with the Docket app and re-create it. After I did this, the app showed my three Pfizer shots. Hurrah! One down and one to go.

It seems that the Docket app may be caching incorrect results longer than it should be.

Meanwhile I had been calling into M Health to try to get Katharyn’s record unlocked. At one point I talked to a person who said there was no problem, as she was looking at the record in question on her screen at that very moment, and was able to update it. Of course this proved nothing, as she was inside M Health and would not have been locked out.

John had told me that the provider interface has a checkbox to lock the record from all but the health system’s employees, and that apparently at some time, perhaps years in the past, that box had gotten checked on Katharyn’s record. Yet for a long time I could not find anyone at M Health who was willing or able to uncheck this box, or even to acknowledge that it existed…

…Until, late in the process, an M Health person named Tobi called on Katharyn’s number. She was help­ful and per­sis­tent, checking in several times until all was resolved (see below). Tobi said that they and MIIC were fielding a lot of problems like ours as more people learned about Docket while getting booster shots.

Trying a different tack, I had found the interface to submit data corrections directly to MIIC. (You can also contact them by phone [651-201-5414 651-201-3980], email [health.miichelp@state.mn.us], or web form.) We updated all of Katharyn’s personal information, including phone number and the batch number of her booster, and left a comment about the locked record. After a few days someone from the MN health department called Katharyn to verify the update. A few days after that John at Corner Drug could see that her record was now unlocked.

But after installing Docket on her phone, I could not connect with this record. I tried all the variants of her name I could think of (she sometimes uses her middle name or an initial). No dice. Another wrinkle: the MIIC database stores three names but Docket only asks for two. Unfortunately I had not kept a record of exactly what we had submitted to MIIC. I called John one more time and, looking at Katharyn’s MIIC record, he suggested the correct form of her name to try.

It took one more round of deleting her account and re-creating it; then quitting the app on her phone and restarting it — that over-zealous caching again — but at last her vaccination record displayed on her iPhone.

The first big question is: what do people do who don’t have the time, the patience, the tech-savvy, and the above-and-beyond assistance of someone like John at Corner Drug?

And the second big question: if in the future we present the Docket screen to a restaurant owner, or a worker at a gym, or an airline gate agent — will they even know what Docket is, and believe what it is telling them?