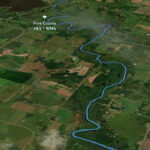 Items of recent pandemic news: Moderna’s vaccine works in those 12 to 17 years old; the political nature of college mandates to vaccinate returning students; and a new, fast-spreading variant out of India. Plus news briefs and a frippery.

A version of the Variant of Concern identified in India, which we noted earlier this month, is now spreading in at least 49 countries. In the UK, B.1.617.2 is rapidly crowding out other variants including the country’s homegrown B.1.1.7. The Indian variant is expected to dominate UK infections within a month. (The US, which does far less genetic surveillance than the UK, has seen around 800 cases of B.1.617.2.)

B.1.617.2 is believed to be as much as 50% more transmissible than B.1.1.7 — one expert quoted in the Times piece said anywhere from a few percentage points up to 50. (B.1.1.7 itself is 50% more transmissible than the original Wuhan version.) Existing vaccines do a good job against the new variant, however: a newly published preprint study (not peer-reviewed) by Public Health England found that the Pfizer / BioNTech vaccine was 88% effective against B.1.617.2 (after two shots), vs. 95% against B.1.1.7. The AstraZeneca vaccine scored 60% vs. 66% in the same comparison.

The UK has a vulnerability to the new variant that isn’t an issue here. That nation decided to stretch out the interval between prime and booster shots, in order to make then-scarce vaccine supplies stretch farther. But a single shot of either Pfizer or AstraZeneca is only 34% efficacious against the Indian variant, vs. 51% against B.1.1.7.

In the US we seemingly have little to fear from the B.1.617s; there is plenty of vaccine and a good fraction of the population has already been vaccinated. Poorer countries might rightly worry though. The Times quotes Devi Sridhar, a professor of public health at the University of Edinburgh: “It’s a warning. What we’re seeing in India is being repeated in Nepal, it’s being repeated in other countries. You need to get ahead of it.”

There are about 4,000 colleges and universities in the US. At this point 416 of them are requiring that all returning students be vaccinated. Of those 416, 92% are in states in which a majority voted for Joe Biden in the 2020 presidential election. 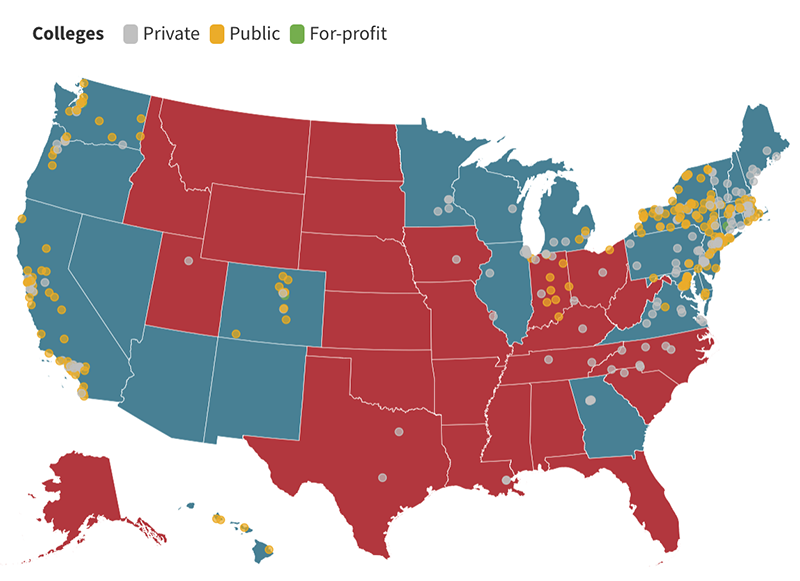 It makes sense. Given the highly politicized nature of questions around the pandemic, masks, and vaccines, if a state’s governor and/or legislature are Republican, a college president — especially of a public institution — will think twice or three times before declaring a mandate so against the prevailing political winds.

The NY Times piece on this political angle to the confluence of education with vaccine policy gets its data from the Chronicle of Higher Education, where this map originates.

Of the 24 red states, 15 have no colleges or universities that mandate shots; 9 red states have one or more. Indiana leads this list with 14 institutions requiring vaccination. Nine of these are accounted for by Indiana University and its satellite campuses. Outside of Indiana, the only public institution with a mandate in a red state is Ohio’s Cleveland State University.

The first university to announce a mandate was Rutgers in New Jersey, on March 25. About a third of institutions require shots for both students and staff, the rest just for students. A few limit the vaccination mandate to students living on campus. Most allow people to apply for a medical or religious exemption.

To get around the possible legal difficulty of mandating a medication that has not earned FDA approval, but only emergency authorization, many of the schools have added a clause making their mandates contingent on one of the vaccines obtaining final regulatory approval. But they would allow students on campus after receiving any authorized shot.

Moderna announced results of its TeenCOVE study of 3,732 adolescents ages 12 to 17. Echoing the results that Pfizer reported in early April, Moderna’s vaccine (given at the same strength as adult dosing) showed 100% efficacy against symptomatic Covid-19 in teens, and 93% against asymptomatic cases. The trial met its primary endpoint of non-inferiority with the adult Phase III. Moderna will apply to the FDA in early June to extend its EUA down to age 12.

Both Moderna and Pfizer are running tests in children as young as six months. These trials will be more involved, because they will explore stepped-down dosing levels in younger children.

Here is coverage from Stat News and Fierce Pharma.

Thanks for bearing with us today. Your frippery is an interactive answer to the question: if you drop a drop of water on the ground somewhere in the US, where will it end up? This site not only answers the question, it gives you a drone’s-eye view of your water’s journey to the Gulf of Mexico, the Great Lakes, or wherever its final destination may be.

Note that this Javascript-heavy app may make your computer or phone run hot for a while, and probably slurp a lot of battery capacity in the process.

The site is the creation of Sam Learner. Hat tip to Jason Kottke for the link.