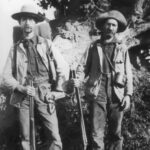 Herewith three items of pandemic news you may have missed recently: One instance in Oregon of a scary variant; quantifying the variants’ immune escape; and the new CDC guidelines. Plus news briefs and a frippery.

Before we dive in, just a word to acknowledge the one-year anniversary of All This. It was one year ago tomorrow that my wife and I began sheltering at home — that was a day before the WHO proclaimed a pandemic. Three days ago marks the one-year an­ni­ver­sary of the last time we ate in a restaurant. Eight days before that we had flown back to St. Paul from Santa Barbara, CA (to get better acquainted with my late grandfather, above left). It was the last traveling of any kind we would do for a then unimaginable stretch of time.

This coming April 1, after two shots of the Pfizer vaccine, we will raise a glass to celebrate the beginning of the end of our pandemic year.

You have almost certainly read about the new guidance from the Centers of Disease Control and Pre­ven­tion; it is being covered everywhere. As one infectious disease expert said, “It’s the first time they are saying you can do something, as opposed to saying everything you can’t do. It’s huge.”

Here is the guidance in a nutshell:

Other news accounts on the new guidelines:

A research team led by scientists at Washington University in St. Louis has reported results from what is perhaps the most comprehensive study to date of neutralization of the several SARS-CoV-2 variants of concern by both monoclonal and serum-derived polyclonal antibodies. The study put some numbers on antibody effectiveness against the variants, to wit: a drop by factors ranging from 3.5 to 10 of serum potency against B.1.1.7 isolate and viruses engineered with some of the features of the variants. Here is the paper published last week in Nature Medicine.

The tests were performed in cells in Petri dishes and in mice, hamsters, and non-human primates. The study scrutinized the protection offered by several commercial monoclonal antibodies, as well as by serum from recovered Covid-19 patients and from those immunized with the Pfizer vaccine.

As other researchers have found, the most troubling mutation was the one designated E484K and nick­named Eeek; it required up to 10 times the amount of antibodies to achieve neutralization.

There’s wide variation in how much antibody a person produces in response to vaccination or natural infection. Some people produce very high levels, and they would still likely be protected against the new, worrisome variants. But some people, especially older and immunocompromised people, may not make such high levels of antibodies. If the level of antibody needed for protection goes up tenfold, as our data indicate it does, they may not have enough. The concern is that the people who need protection the most are the ones least likely to have it.

The study looked only at antibodies, not at T cells or other aspects of the immune system that might also be important in protection against Covid-19.

And this paper by researchers at the University of Texas at Galveston and Pfizer points to the coninuing efficacy of the BNT162b2 (Comirnaty) vaccine against all of the variants, despite its lower performance against especially the South African B1.351.

In a one-off event, a potentially dangerous combination of viral mutations was spotted in Oregon. A patient whose virus was sequenced proved to harbor essentially the B.1.1.7 variant that was first identified in the UK, with the addition of the Eeek mutation. The latter is a feature of the B1.351 (South African) and P.1 (Brazilian) variants, but not of B.1.1.7 — until now.

The Oregon variant is believed not to have been transmitted to anyone else.

B.1.1.7 on its own is, as we have noted, both more transmissible and more severe / deadly. Eeek is the mutation that makes B.1.351 and P.1 more resistant to natural or vaccine-stimulated antibodies, as seen in the item above.

Eeek has arisen independently a number of times in different locations around the world. Those who study evolution say that this fact is a clue that the mutation confers an advantage in terms of natural selection. Oregon will probably not be the last place where we see Eeek showing up.

Your frippery today is a panel from the ever-spot-on-relevant web comic xkcd. In computer science, the questions raised here would be referred to as “corner cases.” Be sure to hover your mouse over the drawing for the ironic secondary voice (which is also present in the original).