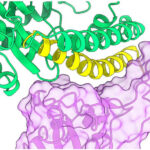 Herewith three items of pandemic news you may have missed recently: A caution for those scheduling mammograms around the time of vaccination; sterilizing immunity from vaccines; and peptides for prevention and treatment. Plus news briefs and a frippery.

Dr. Anthony Fauci said in a recent interview that the focus of scientific work on Covid-19 will be shifting away from vaccines and toward prevention and treatment by drugs that can directly attack the virus. As if to under­score his point, two research groups have just published work on peptides that can bind to SARS-CoV-2 virus and inactivate it.

We are beginning to get more solid answers to the question posed last time: Can people who have been vaccinated transmit virus? The level of sterilizing immunity reported out of the UK and Israel could quite plausibly get us to herd immunity.

United Kingdom: The SIREN study, for which I posted a pair of preliminary links last Friday, has now published its re­sults (Public Health England summary, full paper), and the results are most encouraging. The Pfizer / BioNTech vaccine provided 70% protection from infection by day 10 after one dose, and 85% after the second dose.

Israel: Less solid, in terms of its publication status, is a study reported using data from Israel, the nation that has vaccinated a higher percentage of its population than any other.

We are cautious of scientific research released as a “preprint” — without benefit of peer review or formal pub­li­ca­tion — and even more so of work announced via press release. This Israeli report is in a whole other class of don’t-bet-the-farm-on-it. It is reportedly a 22-page paper from researchers at Pfizer and the Israel Ministry of Health, leaked to an Israeli journalist and partially posted, in screen shots, on Twitter.

Technology Review has a summary of what the journalist, Nadav Eyal, reported that the paper says. Based on the experience of hundreds of thousands of vaccinated Israelis, the Pfizer vaccine (a week after a second dose) pre­vented over 89% of infections, including asymptomatic ones.

An unexpected wrinkle has come up as people get vaccinated in significant numbers. One effect of the mRNA shots can be swelling of the lymph nodes (lymphadenitis) under the arm on the side where the shot went in. This is normal — by one estimate it occurs in about 11% of people following the first shot and 16% after the second. It seems to be more likely with the Moderna vaccine. It indicates that the immune system is working overtime to learn about SARS-CoV-2.

But swollen lymph nodes are also a sign that doctors look for on mammograms as an early indication of breast cancer.

Women who have a mammogram sheduled may want to move it ahead of their first shot, if possible, or delay it until four months after the second shot. [Note added 2021-02-23: Other sources say 3-6 weeks following the second shot. I was not able to find exact advice on the CDC site.]

The doctor quoted in the Pittsburgh Post Gazette article linked above does not recommend such a delay, especially for women who may have missed an annual mammogram in 2020 due to the pandemic. He suggests letting medical staff know if you are getting vaccinated around the same time. They will still call you if they see swollen lymph nodes, but at least everyone will know that it is not necessarily the cause for alarm that it might be under other circumstances.

Two fripperies today. The first is for those who, like me, are missing their favorite bar: follow that link to queue up the sounds of people talking, the bartender working, rain on a window, a late-night city street. You can layer more than one at a time.

The second break from Covid-19 seriousness is the chance to see how icebergs float. Visit Iceberger for a canvas on which you can sketch the outline of an imaginary iceberg and watch while it finds its 90-10 equilibrium. This site was produced by an iceberg scientist.