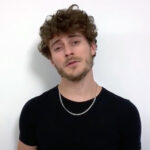 Herewith three items of pandemic news you may have missed recently: Pfizer gets permission to ship fewer vials; how non-pharmaceutical interventions have varied over the course of the pandemic; and how vaccines are coping with the new virus variants. Plus news briefs and a frippery.

Three recently emerged variants of the SARS-CoV-2 virus are causing concern worldwide because they seem to transmit better (all of them), may be more deadly (one of them), and may be less controllable by immunity derived from an infection or a vaccine (two of them). The variants are:

The NY Times has a piece out today summarizing what is known about the variants and existing vaccines’ efficacy against them. In summary, B117 does not present any problems for Moderna’s or Pfizer’s vaccines. B1351 and P1 share several mutations that give vaccines a harder time.

Moderna put up a preprint describing a study concluding that their vaccine is around 1/6 as effective against B1315 as it is against the mainstream SARS-CoV-2 — in terms of neutralizing antibodies produced. Moderna’s scientists and other experts quoted by the Times noted that this represents only one arm of the human im­mune system, and that others (T cells, B cells, etc.) are important as well. Also, the level of neutralizing anti­bodies stimulated by both mRNA vaccines is so high that it is still thought to be protective when reduced by a factor of 6.

In other words, the virus has not escaped vaccine protection yet. That time is coming, and it is coming faster than scientists had originally assumed. The uncontrolled spread of SARS-CoV-2 across the world have given the virus plenty of scope to mutate, and vaccines and natural immunity are providing selection pressure.

Moderna is already working on an update to their vaccine formulation that should better address the mu­ta­tions present in B1351 and P1; if authorized, it (or a descendent vaccine) may be given as a booster to those already immunized against the virus in its current predominant form. Pfizer is believed to be [ 2020-01-27 ] pursuing a similar update; an advantage of mRNA vaccines is that such tweaks can be performed relatively quickly. 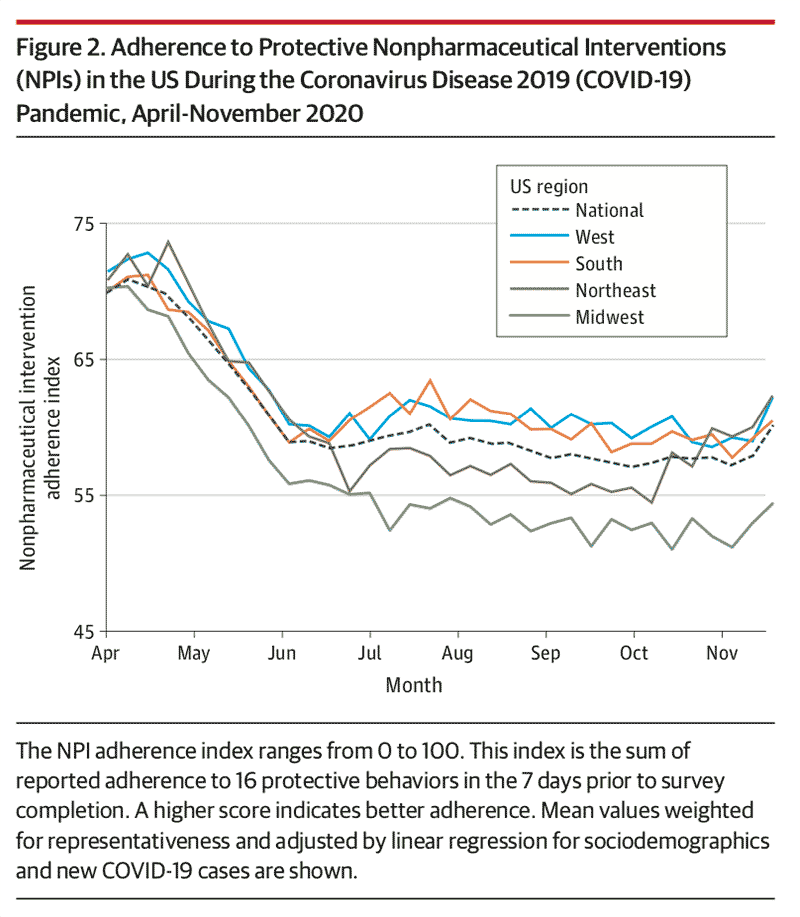 NPIs refer to the actions we all have been taking, and not taking, to slow the virus’s spread since March of last year: wearing a mask, staying home, keeping distance, not eating at restaurants, etc. These are the pandemic-suppressing actions that can fade over time due to “Covid fatigue.” A report in JAMA details results of a nationwide survey conducted every two weeks from April to November, 2020, asking a representative panel to self-report on a list of 16 NPIs.

The pattern the researchers found: In each region of the US, adherence to NPIs decreased from spring to June or July, and then held fairly steady until the end of the study period in November, when an uptick in adherence was seen (the Northeast bumped up first) as the winter surge took hold. The final index values for all regions of the country were below those from the spring; the Midwest experienced the largest drop.

In all regions of the country, mask wearing was the only individual behavior whose compliance increased over the course of the survey.

Here is a summary of the research from the University of Minnesota’s Center for Infectious Disease Research and Policy; the JAMA site requires a login to download the full report.

Do you remember when we wrote about Pfizer’s 5-dose vials sometimes containing 6 doses? And the avail­a­bil­ity of that extra dose depending on the use of low dead-space syringes? The more people dig into the question of the potential extra doses, the deeper the problem appears.

And now to make matters even more difficult, Pfizer has decided to cut their shipment of filled vials to the US government to 5/6 of what had been expected. The company successfully lobbied the FDA to change the vac­cine’s formal authorization language. You see, Pfizer is getting paid by the dose, not by the vial. So despite the great practical difficulty involved in coaxing out more than five doses, a vial now officially contains six. And so suddenly the US has not 20% more vaccine than expected, but 17% less.

OK, you have gotten through the heavy sledding. Your frippery today is the Polish countertenor Jakub Józef Orliński.

First up is Henry Purcell’s “Music for a While.” This is performed (in pandemic style) by Orliński and a six-man chorus of the King’s Singers, consisting of bass, baritone, alto, tenor, and two more countertenors. (Perhaps Purcell scored the piece for sopranos, I’m not sure.) The song was one of several that Purcell’s wrote to accompany John Dryden’s Oedipus. Here are Purcell’s lyrics. It is a strange song. For those previously unaware, Alecto is one of the Furies. You do not want to meet her on a dark night.

Next we have Orliński performing all four parts of a song by Thomas Tallis, “If Ye Love Me.”

Orliński’s own site will reward your exploration.