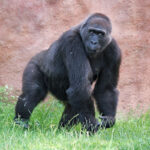 Herewith three items of pandemic news you may have missed recently: In­fec­ted gorillas; inhalable therapies and prophylactics; and the greater dif­ficulty of testing new vaccine candidates once some have been auth­or­ized. Plus the accustomed frippery.

The Phase III trials of the vaccine candidates that have been authorized or approved so far in the US and other countries were randomized, double-blind, and placebo controlled. In the midst of a pandemic surge in this country and elsewhere, they were able to obtain efficacy data and read out in a matter of a few months from the trials’ start.

But now that proven-effective vaccines have been authorized, any drug companies coming later and trying to get Phase IIIs off the ground have both an ethical and a practical problem. Ethically, it is arguable wrong to give thousands of volunteers injections of salt water when effective protection against a deadly disease exists. And practically, who would now sign up for a 1-in-2 chance of getting a null injection, if they are eligible to line up for the real thing?

A way out of both problems would be for newcomers to test their candidate not against placebo, but against one of the proven shots. Instead of a 50-50 chance of getting a shot of (say) CureVac or saline, volunteers get either CureVac or Moderna. The company can then compare its shot’s efficacy against Moderna’s 94%.

One practical issue with this approach is that such trials would have to be larger and/or would take longer before they got to the numbers of infections that could provide statistical power. For example, four months into their Phase III, Pfizer / BioNTech saw 170 cases of symp­to­matic Covid-19, only eight of which were in the vaccine arm. How long might it take to ac­cum­u­late, say, 150 cases when 44,000 participants got a 90%-effective shot? By my math, about six years in a raging pandemic, or three years after signing up 90,000 volunteers.

Another way out of these difficulties would be to look not for infections, but for the correlates of pro­tection. After inoculation does the blood of a volunteer show a profile of immune markers that indicates the person is protected against disease? New flu and rabies vaccines are tested in just this way; such tests read out in weeks instead of months or years.

The problem is, no one knows what the correlates of protection are for Covid-19.

If you want a deeper dive, this article in Nature lays out all these difficulties and more.

Inhalables for prevention and treatment

For a virus that often enters the body through inhalation and infects the nasal passages and lungs, it seems logical that an inhalable therapy might be effective. I have been following news of the de­vel­op­ment of such interventions for months now. Here are two that might be promising.

The first is a nasal spray of nitric acid, dubbed SaNOtize, which just began clinical trials in the UK. It is intended to fight infection by SARS-CoV-2 in the upper respiratory passages and to treat mild to mod­er­ate cases of Covid-19. Earlier research had indicated the nasal spray deactivated 99.9% of SARS-CoV-2 virus, and in rodent studies proved 95% efficacious against Covid-19 disease after the animals were infected with the virus.

The second inhalable of interest is called SNG001. It involves interferon beta delivered via mouthpiece to the lower respiratory passage and lungs, in order to fight an established SARS-CoV-2 infection. Early results from this therapy were promising, but later analysis revealed that the interferon beta seemed to be up-regu­lating the ACE2 protein in the lower respiratory system. This was worrisome, because ACE2 is what the SARS-CoV-2 virus uses to enter human cells and begin replicating.

But now some of the researchers involved in the earlier work, from the University of Southampton in the UK, have discovered (news report; published paper) a previously unknown, shorter form of ACE2 — and this form lacks the binding site that SARS-CoV-2 depends on. It is this shorter form of ACE2 that is up-regulated by the inhalable interferon beta. So research and trials on this therapy will continue.

The San Diego Zoo reports that its gorilla troop has become infected with SARS-CoV-2. Several of the animals are sick and infection cannot be ruled out in the others. “Aside from some congestion and coughing, the gorillas are doing well,” a staff member said. They are hopeful for a full recovery. Spec­u­la­tion is that the gorillas caught the virus from a staff member who was asymptomatic. (The zoo is closed to the public.) Staff have been observing all recommended precautions, such as masking and keeping distance, for the past year.

Your frippery today is an introduction to a man, David Lundell, who makes very unusual, one-of-a-kind furniture. Below is his latest opus: the Wizard Table. You may find it rewards six minutes of attention.