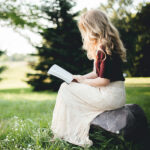 Sometimes it surprises me how easy this stay-at-home time has been for Keith and me. I realize that much in my past has contributed to the ease: over the years, I’ve learned to live self-suficiently in quiet.

I grew up an only girl in a family of brothers; they told me to stay away from their Boys Only treehouses and forts. If my neighborhood girl squad members weren’t around, I’d retreat to my room and spend happy hours with Sara Crewe or Betsy, Tacy, & Tib.

When I was a teen my parents bought a lake cabin. There my brothers and I spent hours swimming and “water skiing” on a plywood disc hooked up to our boat. Then, my older brothers got summer jobs and my younger one would go off on adventures with the little boys next door. There were no girls in the area my age, so I was on my own once more. The reading material then was Ivanhoe.

In my working life I spent a lot of time traveling and staying in hotel rooms. Because I was often overseas, time differences kept me inside. Often I’d wake at 2:00 am local time rested and wishing I could start exploring the area. But most everything was closed and it wouldn’t have been safe for me to walk about anyway. So I stayed in and listened to CNN Headline News on TV. After cycling several times through whatever Christiane Amanpour or Elsa Klensch had to report, I’d turn off the one English program available and do a few exercises, or look out the window at the dark stillness of the Japanese countryside or the sparse boat traffic on the Seine. Then I’d start in on the new novel I had packed.

Sometimes as a traveler I had to stay inside during the daytime hours as well. One time there was a protest at the American Embassy in Athens and I was advised to stay in the hotel. At other times there were weather problems, such as a hurricane in Florida which kept me from venturing out, or a 5-day blizzard in Wis­con­sin which gave me the chance to try everything on the hotel room-service menu and finish embroid­er­ing a tablecloth.

Before Keith and I got together, I was restoring an old house in a small town. I moved there knowing no one. I just liked the place and figured I’d meet people along the way. However, when I arrived it was winter and no one was about. From my kitchen window I could see into my neighbor’s yard. Between the two houses a ball stuck out from the snowbank. It had the label “Wilson” imprinted on it.

That reminded me of the Tom Hanks film Castaway, where he transformed a basketball, also featuring the label “Wilson,” into a companion. So like Hanks’s character I decided to talk with Wilson from time to time, between scraping off old wallpaper from the stairwell or scrubbing what I thought was gray linoleum in the kitchen, only to find it actually used to be white. Eventually, when the spring thaw came and melted the high mound of snow, my neighbor came over to introduce herself. I told her my last name and asked for hers. “Wilson,” she said.