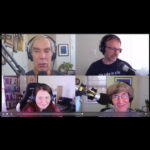 This post is simply a paean to the TWiV YouTube channel and podcast, and an entreaty for you to go check it out and subscribe. It’s my favorite source for authoritative current Covid-19 information.

TWiV was created and is hosted by Vincent Racaniello, “Earth’s virology professor,” with a small cast of regulars. Racaniello, a professor at Columbia, created it 12 years ago and has now produced 659 episodes — as well as spin-off podcasts / YouTube channels on microbiology, parasitism, neuroscience, evolution, immunity, and urban gardening. He is one busy guy.

The YouTube channel has over 11,000 subscribers — certainly a good number of them physicians, scientists, or both, along with assorted hangers-on and fanbois like me. Its reach and influence are certainly greater than that subscriber number implies. For instance one guest recently noted that he knows of physician groups that designate one member to monitor TWiV each week and share the insights gained with their colleagues.

TWiV puts out two videos (and podcasts) per week, usually on Wednesday and Sun­day. The Wed­nesday edition often, but not always, has a guest for the first hour. Recent guests have included Michael Mina and Anthony Faucci. Then for another hour the regulars analyze the Covid news, perhaps in the form of dis­secting a recent scientific paper or two, and discuss a number of letters from listeners.

For the Sunday edition, the opening segment is given over to Daniel Griffin, “America’s clinician,” who updates us on the latest clinical experience and practice with this disease. Griffin is an evidence-based physician who warns us that the words you never want to hear out of the mouth of your doctor are: “In my experience…”

These are scientists talking among themselves, pulling no punches, and brooking no political interference with science. They are not selling anything (aside from perhaps the odd TWiV tee shirt or mug) and they have no agenda other than following the science where it leads and “countering the miasma of anti-think” (that latter is a kind of show motto).

Some weeks I am just astounded to have access to the level of expertise and up-to-the-second knowledge dis­played by the guests (and the hosts) on TWiV. A recent example was TWiV 657 with immunologist Shane Crotty. How does the immune system react to SARS-CoV-2 and what are the long-term prospect for immunity, in­clu­ding from a vaccine? There may not be anyone on earth more in command of the current state of knowledge than Crotty, and for an hour we get to partake of that knowledge.

TWiV 660 represented some kind of high-water mark for the show. Guest Michael Mina talked for an hour about the fast-cheap-frequent testing I wrote about on July 21, and we got to witness the experts on TWiV gradually coming around to the advantages of what are now being called Mina tests (or RATs, for rapid antigen tests, or HEARTs, for home easy antigen rapid tests). Apparently following this show, hundreds if not thou­sands of listeners flooded their mayors, governors, congresspeople, senators, state reps, and health boards with demands that they become educated about Mina testing. This has produced tangible move­ment, even at the FDA. I’m confident we will have “lick-a-stick” rapid testing sooner rather than later, and TWiV is a big part of the reason why.