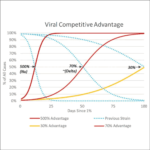 The new worrisome variant we wrote about yesterday, now named Omicron, is roil­ing the world today.

B.1.1.529 was first identified in Botswana, in southern Africa, based on four cases in fully vaccinated people. Another six cases were soon spotted in South Africa, and it was that nation, with its more developed genetic surveillance network, that alerted the world to the potentially dangerous variant. (One case in Hong Kong was directly linked to travel from South Africa.)

The very large number of mutations appearing all at once led researchers to speculate that B.1.1.529 may have emerged in a single patient with an undiagnosed case of AIDS.

You might want to follow Dr. Eric Feigl-Ding on Twitter. He has been tweeting timely pandemic news since January 2020. Dr. Feigl-Ding noted that Omicron may be 5x more infectious than the original Wuhan strain (vs. a bit less than 4x 1.7x for Delta). Early indications are that Omicron has an R0 value around 2.

Here is an interview on video with Dr. Fauci from this morning. Good summaries of the developments to date are provided in these videos from the BBC and Deutsche Welle. (Here is DW’s update in text form, if you prefer that.)

[ Note added 2021-11-26, 14:28 CDT: ] An hour after this post went live the US joined the parade of nations im­pos­ing travel re­stric­tions on eight countries in southern Africa, beginning Monday. The restrictions apply to the six countries listed above for the UK’s ban, plus Malawi and Mozambique.

[ 17:01 CDT: ] In the penultimate paragraph I corrected the relative transmission advantage of the delta variant.

[ 18:35 CDT: ] Here is an Omicron tracker that the creators say will be updated several times per day. Thanks to Mark Gibbs for the tip.