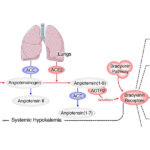 Here is a theory that had been propounded as early as last April, but recently got significant support from a computational biology study that ran for a week on the second-fastest super­computer in the world.

What’s more, the bradykinin hypothesis makes testable predictions regarding a number of drugs — many already approved and in ample supply — that could provide relief to Covid-19 sufferers now.

Here are a civilian-level account of this theory posted on Medium.com; a more technical account in The Scientist; and the paper in eLife from the biosciences division at Oak Ridge National Laboratory.

Bradykinen is an inflammatory molecule, one of the mediators and byproducts in a complex system of regulation in humans known as RAS, the renin-angiotensin system. RAS regulates blood pressure and fluid balance, along with a host of more subtle circulatory effects. If “angiotensin” sounds familiar, perhaps that’s because it is the “A” in ACE2, the receptor to which the SARS-CoV-2 virus binds to gain entry into cells. The bradykinin hypothesis proposes that much of the damage caused by Covid-19 disease in human bodies results from the virus’s disruption of RAS, resulting in a “bradykinin storm” which, among other systemic damage, causes blood vessels to become more permeable. Ac­cording to the hypothesis, this bradykinin enhancement occurs alongside the “cytokine storm” generated in some patients by the immune system’s overreaction to the virus.

The researchers at Oak Ridge used the Summit supercomputer (which is about twenty million times as powerful as the one on your desk) to analyze genetic material in fluid taken from the lungs of Chinese Covid-19 patients. They compared the genetics of the components of this material with that of similar samples from uninfected people. In all, 40,000 genes from 17,000 people were analyzed. According to one of the researchers quoted in the Medium article, the way that markers of a pervasive RAS abnormality jumped out from the analysis was “a Eureka moment.”

When the Oak Ridge team wrote up their results and submitted a paper to the eLife journal, one of the peer reviewers assigned to scrutinize it was the original author of the bradykinin hypothesis — Frank van de Veerdonk, in the Netherlands — about whose work the computational biologists had been unaware. After inventing the bradykinin hypothesis from close analysis of patient data, van de Veerdonk ran a small exploratory study using the drug icatibant in an attempt to reverse some of the damage caused by RAS disruption. The study, published just over two weeks ago, provided support for the hypothesis.

Randomized, double-blind studies are underway to test the effects of some of the bradykinin-affecting drugs that this line of inquiry suggests could be effective in treating the symptoms of Covid-19.

Take note of that word “bradykinin.” I have a feeling you will be hearing much more about it soon.

[ Note added 2020-09-06: ] Today on TWiV (This Week in Virology), Dr. Daniel Griffin commented that the hypothesis is “inteesting.” He’s waiting for more science, more proof. Listen to 3 min­utes or so starting here.

I note with interest that Dr. Griffin pronounces it BRAD-dee-kine-in, not BRAY-dee-kine-in as was my first impression. Good to know. The prefix “brady” comes from a Greek root meaning “slow.”

[ Note added 2020-09-08: ] Derek Lowe writes about the bradykinin hypothesis. An excerpt: “I’m worried that this proposal is almost too neat and form-fitting; rarely do you get something that falls together this well… But overall, I find this work pretty plausible.”