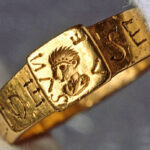 A thing I have been doing during the extended shelter-at-home: researching an ancient mystery that unfolded in Roman Britain beginning 1,600 years ago and may have profoundly influenced 20th-century English literature.

There was a pagan Roman named Silvianus, living around the year 400 in what is now the British Isles, who prized a large gold ring. It was large enough that it was probably worn on a thumb, or over a glove, or both. The ring featured a perplexing head — a lion? a savage Pict? Venus herself? — and a reversed inscription that, when stamped into wax, would read VENVS.

His ring got stolen. He knew who did it: an apparently Christian Roman named Senicianus. We believe the thief to have been a follower of the Christian faith because he had an additional inscription engraved around the ring: Seniciane vivas {i}in De(o), or Senicianus live well in God. This inscription was botched: the “i” in “in” was doubled, leaving no room for the final “o” in “Deo,” which was omitted. 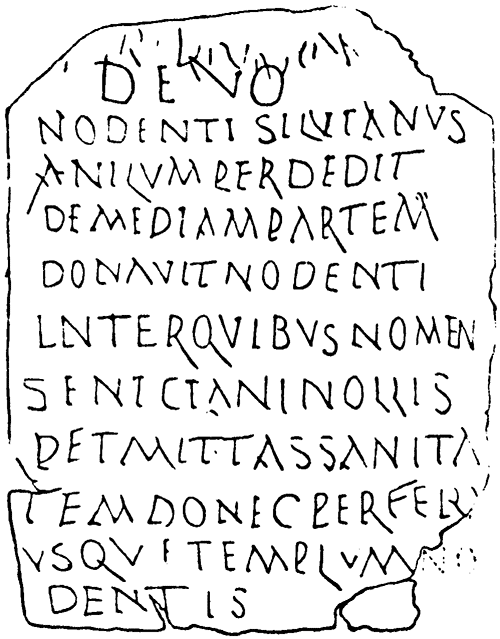 The crime may have gone down in or near what is now Silchester, Hampshire, and was then the Iron Age Roman town of Calleva Atrebatum. This settlement declined after the Romans abandoned it around 430 AD, and there is no evidence of occupation after 450.

The ring was found there in a plowed field in 1785. It made its way to the great house that is now The Vyne, owned by the National Trust. We can imagine that the history-loving lord of the manor bought the ring from the peasant who found it.

Thirty-two years later, in 1817, another clue in the mystery turned up 80 miles away at Dwarf’s Hill in Lydney. In Roman times this was the site of a temple devoted to a local Celtic deity named Nodens, who had been adopted into the pantheon by the Roman occupiers. (Nodens seems to have had a remit over matters such as hunting, and the sea.) An object found during excavation there turned out to be a “defixio” — a curse tablet made of lead. It was tiny, only 2.5″ x 3.1″. Its inscription read (best English translation I found):

To the god Nodens: Silvianus has lost his ring and given half (its value) to Nodens. Among those who are called Senicianus do not allow health until he brings it to the temple of Nodens. (This curse) comes into force again.

Over a century later, in the 1920s, the British archaeologist Sir Mortimer Wheeler was excavating at Lydney, and thought to connect the curse tablet with the ring at The Vyne. When it came time to write up his report, Wheeler needed help with that local god Nodens, whose temple he had dug around in. He asked a colleague at Oxford to research the etymology of the name Nodens. The colleague was a young professor of Anglo-Saxon named J.R.R. Tolkein.

Can you see where this is going? Dwarf Hill. A gold ring. Inscribed. Stolen. Cursed.

Tolkein produced a scholarly appendix for Wheeler’s paper, and within little more than a year had begun writing The Hobbit.

The ring was little known outside the family that acquired it in 1785, until 2013: on April 1st of that year it was put on display at The Vyne in Hampshire, alongside a replica of the lead curse tablet and a signed first edition of The Hobbit.

The curse tablet is displayed at Lydney Park Estate, Gloucestershire.

We hope to get over there to see them, once it’s possible to travel again.