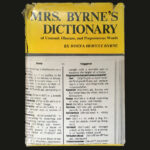 The last 2+ months have not been easy, despite how aware I am that my wife and I are having a far easier time of it than many people are. We have been rigorous about staying far away from others, wearing masks when outside and gloves when shop­ping, and dealing carefully with everything that enters the house — mail, packages, groceries. It has all paid off so far: neither of us has brought The Miley home.

As the Governor loosens restrictions and life returns to some shadow of the former normal, I won’t be taking any more risks than I have since early March. I refuse to floccinaucinihilipilificate all the work that we have put into staying healthy so far.

Don’t ask me why, but that is the word I woke up with this morning to accompany the resolve to stay the course on measures to avoid infection.

Floccinaucinihilipilification was first used in print in 1741. It is a jocular word meaning the declaring of some­thing to be of no worth or value. It was the longest word in the first edition of the Oxford English Dic­tion­ary (until bested in a later edition by pneumonoultramicroscopic­silico­volcano­coniosis).

The word is a prime example of sesquepedalianism: the use of words a foot and a half long. That one goes back to the Roman poet Horace. He was being jocular too.

I learned both of the words in the title decades ago from my autographed copy of Mrs. Byrne’s Dictionary of Un­usual, Obscure, and Preposterous Words (the author is the daughter of the late violinist Jascha Heifetz). You have not played Dictionary until you have played it using that ref­er­ence work as the authority.