Minnesota is farther along than some states on the path to a prudent reopening — and the state is proceeding cautiously as the metrics supporting such an easing of policy are favorable. Other states don’t show the same caution.

Here are a couple of resources I’ve been checking periodically as this state and others move to loosen pandemic restrictions:

1. — Reopening America (ProPublica) — how each state ranks on five carefully considered metrics pointing to whether or not it is safe to ease strictures. 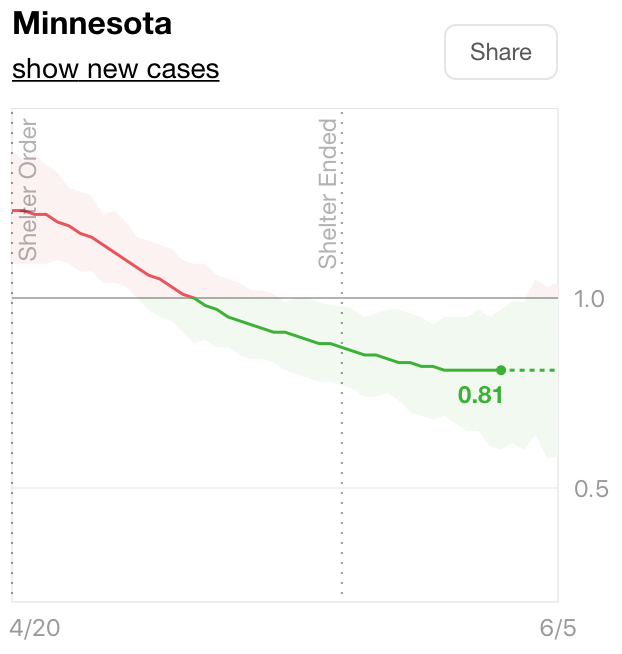 The figure above indicates that the trends (based on CDC and White House criteria) are going in the right direction here. Minnesota is one of only 17 states that show green (or at worst, unchanged) across all five metrics tracked by ProPublica.

The figure at right demonstrates that the virus reproduction rate is where it should be — well below 1.0 — and not at the moment trending upwards. Assuming that the calculated Rt is close to correct, the virus is not spreading more widely here.

Contrast our situation in Minnesota with that in Georgia. The governor there released the lockdown so early (on April 29) that even the White House objected! The effective reproduction number began rising at once, and now stands at 1.06 — the disease is spreading in that state. Georgia does not collect and release reliable testing data that would allow for any assurance as to where the virus trends are heading. 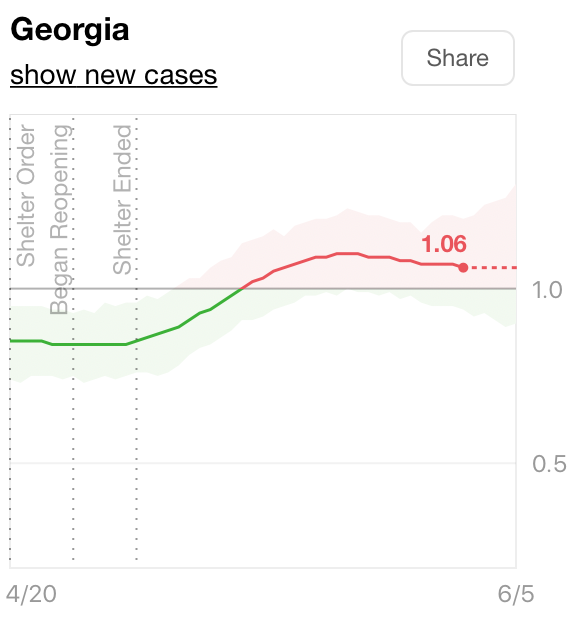 The illustration below, adapted from the effective re­pro­duc­tion rate site, shows Rt values at this point in time for all the states. Follow the link above for an interactive version, where you can explore the Rt trends over the last several weeks for the nation as a whole.