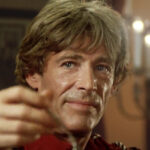 This newsletter is tapering down. For 25 months I have been docu­ment­ing the medical and scientific history of this extra­ord­inary time. The country now acts as if it is over; what urgency the pandemic still commanded is leaching out. Herewith a catch-up on a month of pandemic news.

Following its successful pediatric trial, Moderna has now applied to the FDA for emergency use authorization for its vaccine in children aged 6 months to 6 years. Young kids might be eligible for vaccination by June.

The FDA has granted full approval to the drug formally known as Veklury (but which everyone will continue to call Remdesivir) for anyone with Covid-19 over the age of 28 days and weighing more than 7 pounds. Remdesivir has now risen to the #2 spot on the CDC’s priority order for treating Covid-19; and it is the only option for pediatric use.

Reports are emerging of people given Paxlovid experiencing a resurgence of the virus days after the treatment course concludes. They test negative for the virus after treatment and then, 10 to 14 days later, test positive once again. For all known cases to date, the resurgence has been less severe than the original viral peak, and was cleared without further complications.

Now US government researchers have put out an urgent call for data on the phenomenon.

On the episode of This Week in Virology that dropped today (Clinical Update #122), Dr. Daniel Griffin made a couple of points about the rebound cases he had encountered. (Watch about 3-1/2 minutes beginning at 19:02.) First, rebounds had been seen in the clinical trials, but at a rate no higher than placebo. Second, a similar phenomenon can occur with any therapeutic, such as an antibiotic. A 5-day course of Paxlovid may not be long enough for everyone to clear the virus. The Bloomberg piece linked above notes that government scientists want to know whether extending the 5-day treatment might be necessary in some cases, and how to identify those cases.

Some commenters raised the question of whether post-paxlovid rebound might be evidence of the virus developing resistance to Paxlovid. Griffin and TWiV host Vincent Raciniello agreed that this was not likely, but that the ex­per­i­ments to demonstrate a negative result — or indeed to nail down what viral changes might confer resistance — have not been performed.

The WHO’s use of Greek letters to distinguish Variants of Concern was supposed to put an end to the confusing tangle of nomenclature around the varieties of the SARS-CoV-2 virus. Since Omicron, that intention has not worked out so well.

In the beginning there were BA.1, BA.2, and BA.3. When the Omicron variant was discovered and characterized in South Africa last Thanksgiving (before it received its Greek letter), it has already split into three branches. BA.1 is the one that first achieved dominance worldwide.

BA.2 proved to be about 40% more transmissible than BA.1 and had become dominant in the US and worldwide by April.

South Africa is now seeing two more branches spread — these are called BA.4 and BA.5. They have both evidently made it to the US, but represent just a handful of cases. Both sub-variants are believed to be more transmissible than BA.2 and possibly to evade immunity more effectively. Interestingly, BA.4 is detectable via the “S-gene target failure” that the BA.2 “stealth” variant omits but that is a feature of BA.1.

Two descendants of the BA.2 lineage — BA.2.12 and BA.2.12.1 — are rising rapidly in New York and elsewhere. They are believed to have a 40% advantage over BA.2, some of that perhaps due to improved transmissibility and the balance to better immune evasion. These two subvariants may explain why New York has been the US’s Covid hot-spot for the last few weeks. Here is the state’s health department’s report. 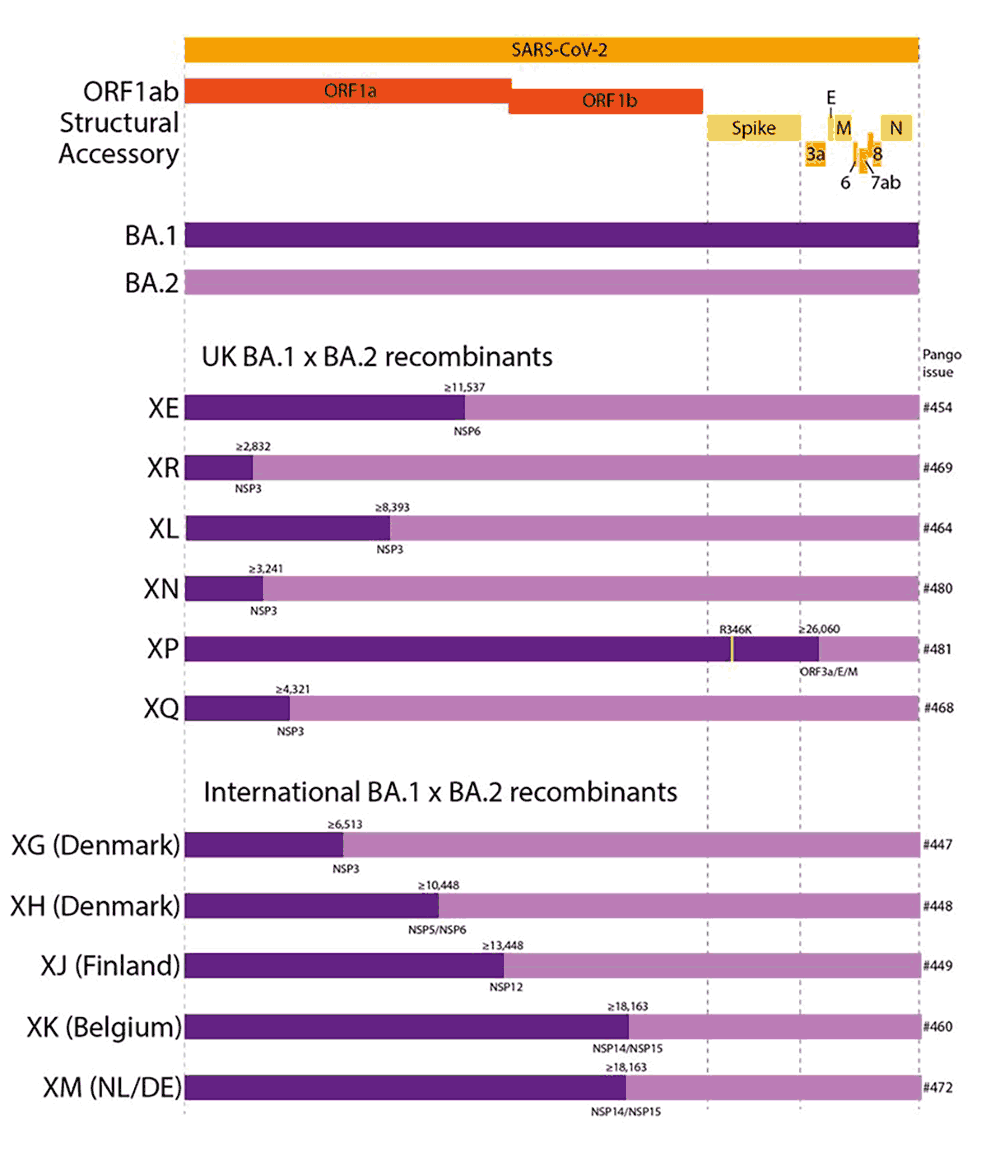 Recombination — Not only is the virus growing new variants and sub-variants by random mutation, but it is also morphing by recombination. This occurs when two variants simultaneously infect the same body (and the same cell); it happens when multiple strains are circulating in a population at the same time.

First let’s look at the recombinants of BA.1 and BA.2. The most widespread one, dubbed XE, was first detected in UK on Jan. 19; 1,125 cases had been seen as of Apr. 5. XE has also been spotted in Thailand, Japan, India, and Israel. A few cases have been detected in the US. XE is said to be — wait for it — slightly more transmissible than BA.2.

A large number of other BA.1 – BA.2 recombinants have been sequenced, as outlined in the graphic at right from epidemiologist Tom Peacock. Earlier this month “Your Local Epidemiologist” Katelyn Jetelina summarized what was known about XE and other recombinants.

The WHO has estimated that XE may be 10% more transmissible than BA.2.

Two Delta – BA.1 recombinants, XD and XF, have been seen (which some have called Deltacron), but neither is be­lieved to spread.

Here’s a nice summary from The Atlantic on the nomenclature morass into which Omicron has descended, with nary a Pi in sight.

A new experimental drug showed such encouraging results that its Phase III clinical trial was halted early, on April 8 (on a unanimous recommendation from the independent monitoring board). The novelty here is that this oral treatment demonstrated a significant improvement against severe cases of Covid-19 in hospitalized patients, some of them on oxygen — those given sabizabulin had a 55% better chance of not dying, versus placebo. No SARS-CoV-2 therapeutics to date have done much for critically ill patients.

The drug is made by the 50-year-old company Veru, Inc., which has mainly been focused on breast and prostate cancers. Veru’s stock price tripled after the company announced that it will file for an EUA for sabizabulin. Here is Veru’s press release. Data from the interim analysis of the study were released this week after presentation at a European infectious disease conference.

The drug is given as one capsule daily, by mouth. In the study some patients received 21 days’ worth.

Sabizabulin works by disrupting the transport of SARS-CoV-2 through microtubules in cells. The same mechanism also interferes with the movement of cytokines produced by the body, thus helping to damp down inflammation. No safety concerns were raised in the Phase III trial.

And no, I wasn’t sure about how to pronounce the drug’s name either. I had assumed sah-buh-zab-you-lin (which sounds too funny to be right, with its echos of Fred Flintstone), but Dr. Griffin pronounced it sah-biz-uh-bool-in. Let’s go with that. 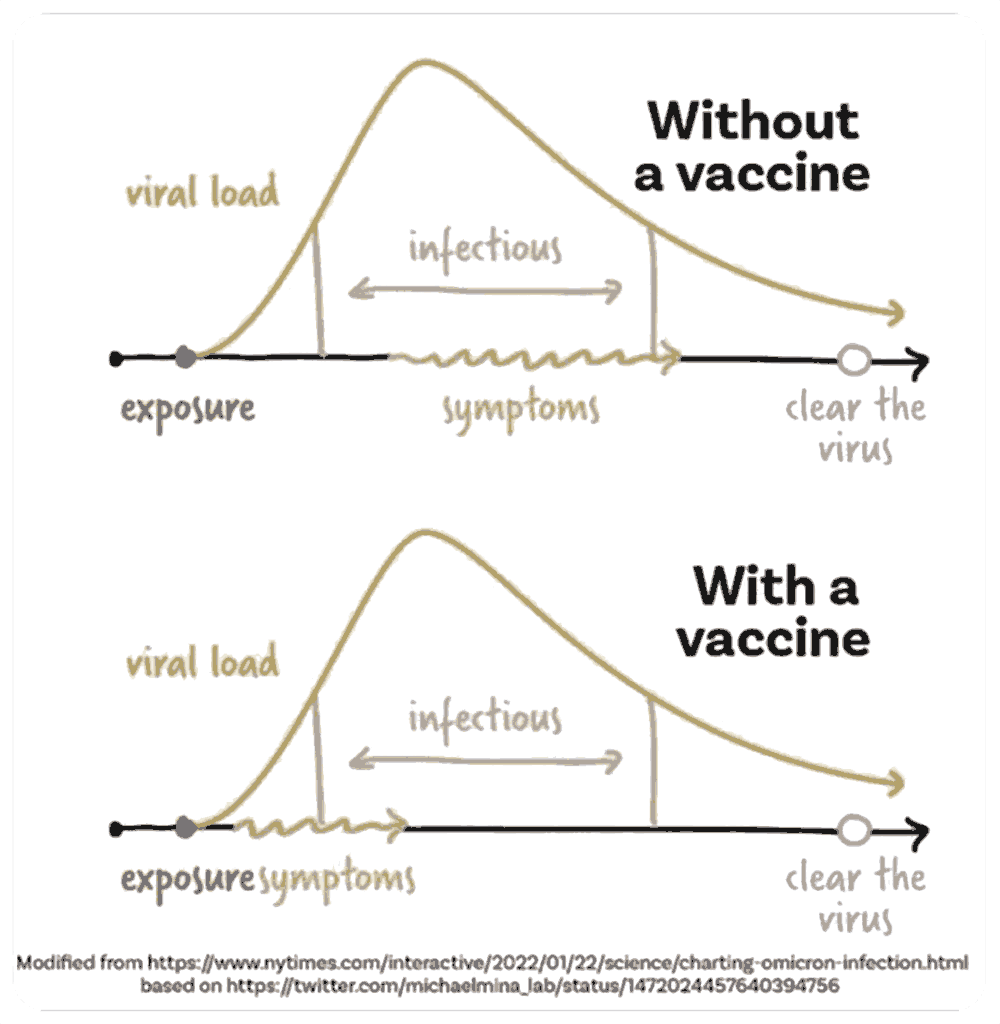 Never has a frippery been so welcome. Please enjoy the opening titles and initial chase scene from the action comedy The Stunt Man (1980). The clip is 9:13 in length. This film, directed by Richard Rush, was nominated for three Oscars (winning none), inculding one for Peter O’Toole as best actor (that’s him at upper left) and another for best director. A Canadian critic called The Stunt Man “the best movie about making a movie ever made, but the achievement merely begins there… Imagine a picture an eight-year-old and Wittgenstein could enjoy with equal fervor.”

You can catch the entire film here. And ask yourself: “How tall was King Kong?” There will be a quiz.