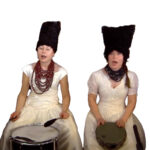 This week marks two years since the WHO declared a pandemic. As the Omicron wave recedes, here are some longer-form perspectives on where we are headed and where we should perhaps be headed instead. Plus a Ukrainian frippery.

On Monday a group of infectious disease experts and epidemiologists, a who’s who of the voices of the pandemic, released a roadmap to living with Covid, moving toward a state they call the “next normal.” The list of 23 authors includes many names that will be familiar to longtime readers: Trevor Bedford, Kizzmekia Corbett, Ezekiel Em­man­uel, Aikiko Iwasaki, Michael Mina, Paul Offit, and Michael Osterholm. Thirty other authors are credited with contributing.

The group recommends broadening the focus of Covid surveillance and countermeasures to encompass more respiratory illnesses, including flu and respiratory syncytial virus. (The latter disease kills more young children annually than influenza does.) They recommend a national target of fewer than 60,000 deaths per year from respiratory infections. That is about the number of fatalities currently from flu alone in a bad season.

The roadmap group also wants the next normal to continue some elements introduced in the fight against Covid, for example more remote work, less commuting, and better indoor air quality. They also stress test-and-treat (as the Biden administration also does) to get people quick access to therapeutics such as Paxlovid. The roadmap calls for a renewed emphasis on research and treatment for long Covid.

The release of the 136-page roadmap has been covered extensively. Here are write-ups from Stat News, Fortune, and CIDRAP. MPR News has an interview with Michael Osterholm covering the high points.

I found the roadmap site’s embedded PDF reader (from a service called Issuu) somewhat finicky. Here is a link to the report in its own browser window. I could not find a way to download the full PDF.

A series on long Covid

Lately I have been linking to the posts of Katelyn Jetelina, Your Local Epidemiologist, because she is good at making public health and epidemiology accessible to the non-specialist reader. Jetelina links and summarizes, in understandable terms, current research on the virus. She reproduces and/or adapts illustrations from the published papers to clarify the subject matter.

Now YLE has begun a mini-series of five four posts on the subject of long Covid. Here are links to all of them. (The series was originally projected to extend to five posts, but YLE ended up combining #4 and #5.)

How to navigate the post-Omicron world

Here is another science interpreter and popularizer who has been active during the pandemic. Dr. Robin Scho­en­thaler is a Boston oncologist who began posting her notes on Covid just before the WHO declared a pan­demic, 24 months ago. Her most recent post tackles a question I have been wondering about myself: how do we actually go about re-engaging with the world after two years of deeply internalized mortal hazard?

And should I then presume? And how should I begin?

Why do we quietly accept a million deaths?

Ed Yong’s recent piece in The Atlantic is a clarion cry of outrage that we have, as a society, acquiesced to a million deaths from this scourge, “without the social reckoning that such a tragedy should provoke.” And whose deaths? Mostly old people, poor people, Black and Brown people. Here is Yong’s opening paragraph in full.

The United States reported more deaths from Covid-19 last Friday than deaths from Hurricane Katrina, more on any two recent weekdays than deaths during the 9/11 terrorist attacks, more last month than deaths from flu in a bad season, and more in two years than deaths from HIV during the four decades of the AIDS epidemic. At least 953,000 Americans have died from Covid, and the true toll is likely even higher because many deaths went uncounted. Covid is now the third leading cause of death in the US, after only heart disease and cancer, which are both catchall terms for many distinct diseases. The sheer scale of the tragedy strains the moral imagination. On May 24, 2020, as the United States passed 100,000 recorded deaths, The New York Times filled its front page with the names of the dead, describing their loss as “incalculable.” Now the nation hurtles toward a milestone of 1 million. What is 10 times incalculable?

Follow that link and read the rest. It will repay your time.

Here is another Ukrainian band, DakhaBrakha (translated: give/take), quite different from the polished Eurovision stage act we enjoyed last week. NPR’s Bob Boilen characterized the self-described “ethnic chaos” music of Dakha­Brakha this way: “The creative quartet from Kiev, Ukraine make music that sounds like nothing I’ve ever heard, with strands of everything I’ve ever heard.”

This Tiny Desk Concert was recorded in 2015. If you aren’t familiar with Tiny Desk, it is a series of intimate concerts produced since 2008 for NPR Music by Boilen. Over 900 concerts are up on the YouTube channel and listed and linked at Wikipedia; new concerts are added at a rate of two or three per week. Before the pandemic these concerts were recorded live at Boilen’s desk in NPR’s Washington DC offices. In the last two years the Tiny Desk (Home) Concerts have been virtual.