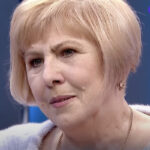 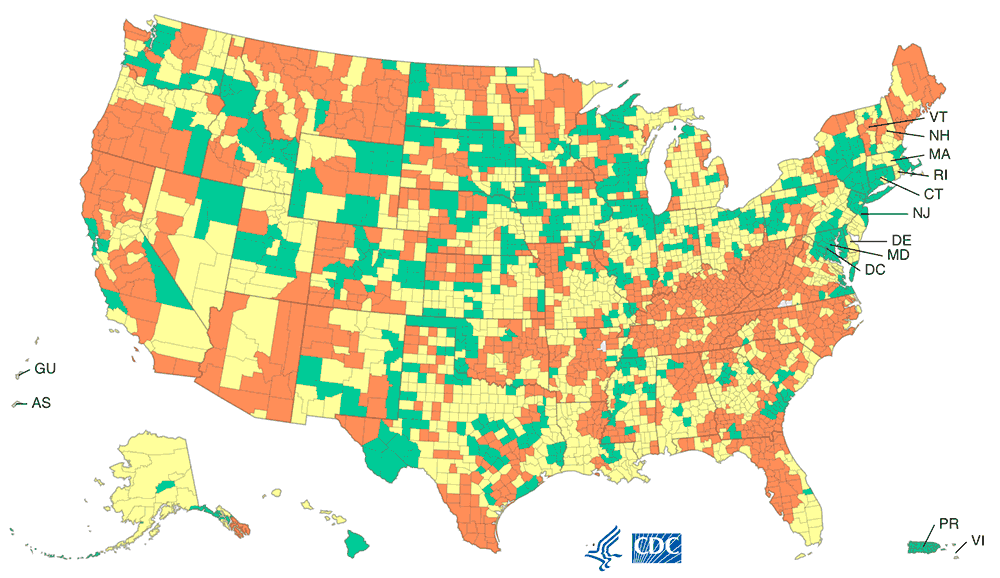 The Centers for Disease Control and Pre­vention issued new guidance for when non-pharmaceutical interventions (masking et al.) are recommended in the US. The new guidelines inherently take into account the level of immunity present across the country now, pro­tec­ting people from hospitalization and severe disease. With a focus on harm reduction, the goal no longer is to stop or slow the spread of SARS-CoV-2; it is to stop hospitals from becoming overwhelmed. The CDC uses the level of hospitalizations for Covid-19 as a prime metric for determining when to ease off of masking, etc., and when to tighten back down.

The CDC guidance assigns each of the counties in the US to a category of Low (Green), Medium (Yellow), or High (Orange) based on three metrics: the rate of hospitalization for Covid-19 in the previous week, the percentage of hospital beds occupied by Covid-19 patients, and the level of new cases. Under the guidelines, over 70% of the US population currently lives in a Green or Yellow county, and can stop masking indoors.

Masks are still required on interstate transportation — buses, trains, planes — and recommended in Red counties, and in Yellow for the immunocompromised or those otherwise at high risk.

Here are Stat News’s summary of the new guidelines and a commentary by Your Local Epidemiologist Katelyn Jetelina.

At this writing Ramsey County, Minnesota is Green — indoor masking not required. Follow the CDC link to access a tool to look up the current status of any US county. I have embedded this tool below but notice that it does not always show up in the browser; try refreshing if you don’t see it.

Pfizer / BioNTech may, or may not, have deeper problems in determining an optimum dose of their vaccine in young people than the widely reported shortfall in kids 2-4 years old.

The New York State Department of Health posted on a preprint server the results of a study of Pfizer vac­cin­a­tion in 5-to-11-year-olds (the work has not yet been reviewed by peers). The study covered mid-Dec­ember through January, when Omicron was becoming dominant. The upshot is that the vaccine’s protection seemed to fade much faster in these youngsters than in those 12 to 15.

Stat speculates that the 10-μg dose used in the younger cohort — 1/3 of that given to teens and adults — may not be sufficient to provoke lasting immunity. In the study, protection against both infection and severe dis­ease dropped off much more rapidly in the younger kids.

That preprint came out on Monday. Yesterday CDC scientists published a paper (here is Stat’s summary) in the MMWR, with data from 10 states and covering a longer time period, finding no such drop-off as that in­di­cated in the New York signal.

In southwestern Ontario, some infected deer have been found to carry a highly divergent strain of SARS-CoV-2, with 76 mutations, that has not been seen before, in deer or other animals. Here is a summary from Ars Technica.

Laboratory tests indicated that the new strain would not evade immunity from vaccination.

The new strain most closely resembles one found a year earlier in mink and people in nearby Michigan. The preprint linked above claims to offer the first indirect evidence of deer-to-human transmission, but as Ars pointed out the infection could have gone the other way. Given that the strain has 37 mutations seen in other non-human animal hosts, it seems more likely that it incubated out of sight for a year in wild deer and jumped back into a single person.

Remember when we wrote earlier this month about long-term heart problems arising from SARS-CoV-2 infection? The same team has a journal article on mental and neurological difficulties that linger following Covid-19. The NY Times has a summary.

The researchers studied the records of 154,000 recovered Covid-19 patients in the Veterans Health Ad­min­i­stra­tion system; all had no history of mental health conditions in the preceding two years. The sub­jects were paired with people who did not get Covid. The recovered were more likely over the following months to be diagnosed with sleep disorders (41%), depression (39%), stress and adjustment disorders (38%), and anxiety (35%).

Overall, in the year following recovery about 18% of the Covid-19 subjects received either a diagnosis or a pre­scription for a neuropsychiatric issue, compared to 12% for the controls. The chances for such an outcome were higher for more severe cases of Covid-19, but even mild cases were at greater risk compared to those who had never contracted the disease.

How to find Paxlovid

This note updates the post from five weeks back, as several parties have introduced tools that tame the rigors of the US government database tracking the availability of Covid-19 therapeutics. The ones that are effective against Omicron are Bebtelovimab, Evusheld, Molnupiravir, Paxlovid, and Sotrovimab.

Bloomberg News reports that the supplies of these drugs are finally improving at the same time as the sharp drop-off in the Omicron wave is reducing demand for them. Supply is sufficient to meet demand in many places.

The government’s database of available therapeutics is, as we have mentioned, less than consumer-friendly. A Microsoft engineer named Bob Relyea has written a usable front-end for this database to display Paxlovid availability. The link in the previous sentence displays results for the state of Minnesota.

In addition, the Department of Health and Human Services has made available a mapping application that can drill down on availability for all five therapeutics.

At this writing Minnesota has about 1.5 times as much Paxlovid available as it did five weeks back.

After the past week we all need a frippery. Russia’s unprovoked and brutal invasion of Ukraine has absorbed most of the world’s attention, mine definitely included. I’m carrying on with life as much as possible while doing what I can from this distance for the Ukrainian people’s fight.

The frippery today illustrates a cross-current of culture and art between the US and Ukraine. Musicians around the world have been inspired by US-grown hip-hop / rap music, and the Ukrainian Kalush Orchestra’s song Stefania is an exemplar of that. It’s a song in praise of the lead singer’s mother, Mama Stefania, as near as I can figure out (that is she at upper left; she makes an appearance in the video). The song alternates be­tween a simple folk melody with tight harmony and traditional folk instruments, and a full-on rap with dance moves and elaborate stage effects.

Stefania is Ukraine’s entry in the 2022 Eurovision Song Contest, to be broadcast in May from Turin, Italy. Eurovision is an international competition in which each country (39 of them in 2021) submits one original song to be performed live. It has been broadcast annually since 1956, with the exception of 2020. Its annual worldwide audience numbers in the hundreds of millions.

The members of the Kalush Orchestra are not performing at the moment. They are fighting in the streets.