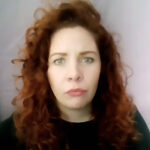 Items of recent pandemic news: The data on incidental Covid; where the Omicron wave may go and when; months-long persistence of the virus in multiple organ systems; and an entreaty to the President to think endemic. Plus a frippery.

Three medical experts, members of the Biden administration’s pandemic transition team, have publicly called on the president to shift the country’s approach to the virus, accepting that it will be endemic and that we need a way to live with it.

The three are Zeke Emmanuel, Michael Osterholm, and Celine Gounder. Long-time readers will recognize those names. Here are the trio’s open letter in JAMA and a summary from CIDRAP (where Osterholm is director).

The primary recommendation is explicitly to abandon a “zero Covid” strategy in favor of a harm reduction approach (as we wrote about last month). As part of this shift, the authors call on the White House to press forward with vaccine mandates and to redouble efforts to make home testing ubiquitous and affordable.

These goals would fit into a renewed commitment to rebuild public health. In this country, with our emphasis on individualism and history of neglect of the public sphere, such a change in direction will be a heavy lift.

SARS-CoV-2 persists throughout the body long-term

A study posted last weekend in preprint form describes the most comprehensive look yet at SARS-CoV-2’s persistence in the body following an infection. The National Institutes of Health led the study in which the bodies of 44 people who died of Covid-19 were autopsied. The researchers found virus in the heart, brain, and many other organ systems up to 7 months following symptom onset.

Bloomberg has a summary of the research, which is under review for publication in Nature.

The findings are mostly about data from fatal Covid cases, not long Covid per se, but the researchers point out that delayed viral clearance in organ systems other than the respiratory tract could be a potential contributor to long Covid.

While the team’s methods (which are spelled out in the preprint) have not yet been reviewed by outside experts, the autopsies seem comprehensive compared to most post-mortem studies of Covid-19 patients published to date. And they mostly occurred within a day of death.

Bloomberg notes that at this time the conclusion that SARS-CoV-2 invades the tissues of multiple organ systems is not established consensus among researchers in the field.

Now we are accelerating

When we last looked at case acceleration in this state, just after Christmas, Minnesota was in surprisingly good shape compared to the Northeast. Our Delta wave was fading and Omicron had not caught traction here yet. We just em­barked on the vertical part of the Omicron tsunami. 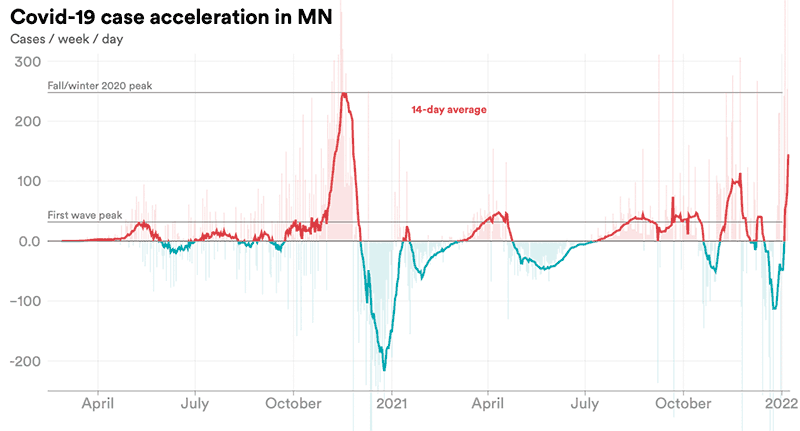 Epidemiologist and modeler Jeffrey Shaman has a NY Times op-ed laying out where Omicron may go from here, and the timing in different areas of the country. He expects New York and parts of New England to peak right about now with other regions such as ours falling in later — think late this month. Katelyn Jetelina largely agrees with Shaman:

Once we reach [the peak in cases], we still have a 3–4 week window for hos­pit­al­i­za­tions and deaths to peak. It will be a rough couple of weeks coming up. Hang in there.

The IHME projection, just out — dissected here by Zvi Mowshowitz — is in the same ballpark: peak by late January and a relatively rapid decline. Although note that the decline could be slowed by people loosening their behavior once the peak passes. Once we are through this wave, more than 50% of the US population will have been infected.

Hospitalized “with Covid” vs. “for Covid”

States are beginning to break out reporting on cases of “incidental Covid.” California was first, New York followed, and now Massachusetts has decided to distinguish those patients who are hospitalized for something else but show up positive for the virus in routine screening. The Massachusetts governor is taking credit for having championed the “with Covid” distinction since fall of 2020. Ontario announced a similar data breakout last week.

It seems like in the Omicron wave something between 40% and 60% of Covid cases reported by hospitals are in­ci­den­tal. But how exactly “incidental” is defined matters.

The Washington Post reports on some of the nuances of the “with Covid” vs. “for Covid” distinction. For example, how do you classify someone who goes to the hospital with heart arrhythmia that was (probably) brought on by Covid? How about someone who is admitted with gastric problems but then contracts the virus in the hospital?

To reward your patience, the frippery today is an introduction to the comedian Stevie Martin. No, not Steve Mar­tin — this one is a Brit and female. (Also not to be confused with our Canadian time traveler.)

Along with her flatmate Lola-Rose Maxwell, Stevie creates video sketches about life in this technological age. I found these links on Metafilter, where one commenter characterized the collection as “a parable about what happens when people who don’t like interacting with people design everything that interacts with people.”

The video embedded below, “Verifying that you’re not a robot,” is the one you may have seen. Not a huge viral hit, but it has been viewed 6.1 million times on Twitter and a tenth of that on YouTube. I think it is the best of Stevie and Max­well’s work. Here are some others:

[ Note added 2022-01-10: ] It turns out that the JAMA opinion piece linked above, urging a new national strategy for endemicity, was one of three linked editorials that were posted on January 6. Here they all are: