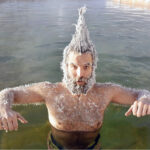 On Monday the FDA authorized booster shots for teens age 12-15 of the Pfizer / BioNTech vaccine. The action ex­tend­ed the EUA; while the vaccine is fully licensed for people 16 and older, boost­er doses for all ages fall under an emergency use authorization.

At the same time the agency reduced to five months the recommended interval between primary series and boost­er, for recipients of the Pfizer / BioNTech vaccine only. This applies to people of all ages. Those whose primary vac­cine was Moderna or J&J continue to wait six months for their boost.

In a third action the FDA extended Pfizer / BioNTech’s EUA to allow an additional primary dose (not a boost) for immunocompromised 5-to-11-year olds, to be given 28 days after the second shot.

Here is the FDA’s press release announcing all three actions.

The ACIP advisory committee of the CDC met today and voted in favor of the above recommendations.

You may have heard that last week the FDA uttered one vague sentence that caused alarm bells to ring across the media. (One observer referred to the agency’s “weasel words.”) Here is that sentence: Early data suggests that antigen tests do detect the Omicron variant but may have reduced sensitivity. The FDA provided no data to back that up.

Now a study has been posted in preprint form (not peer-reviewed) that pulls in the same direction as the FDA’s weasel words. Here is Stat News’s summary.

It is well known that a PCR test can pick up evidence of SARS-CoV-2 RNA fragments before an antigen test will show positive. Conventional wisdom has been that that gap of time is about a day. In that gap, the consensus has said, the person probably does not have enough virus on board to be infectious.

The new results showed that in the case of Omicron, that gap may be as long as 2-3 days, and the study identified some people (28 out of 30) with a high viral load (low Ct reading) who were probably infectious a day or two before antigen tests picked them up; and four of those people apparently did infect others.

If this effect is real, it may be caused in some way by Omicron’s more rapid rise in an infected person, or possibly by partial escape from detection by the antigen tests. Most of the tests, including the ones used in the study (Abbott BinaxNOW and Quidel QuickView), detect the nucleocapsid (N) protein of the virus, not the spike. N has a few mutations in Omicron but early indications were that detection should be undiminished. Perhaps that is not the case.

This study also showed that viral loads peaked in saliva samples a day or two before those from nasal samples, sug­gest­ing that swabbing the throat could be more effective than the nostrils. (Or better still, combining both in sample collection.) Katelyn Jetelina has recommendations for taking throat swabs, including a link to a this ins­truc­tional YouTube video, in her latest post.

As we noted last month, for those who need them the newly authorized oral antivirals, paxlovid and molnupiravir, are hard to get hold of. The Washington Post claims that supplies should begin easing by mid-January, but that would surprise me quite a lot; I’m assuming March at the earliest for paxlovid.

Here are the US government pages laying out the allocations, week by week, for paxlovid and molnupiravir. Each was updated on Dec. 30, and each shows the number of courses that will be delivered to the states this week. For molnupiravir that total is 300,620 courses (40 pills each), of which 4,080 are coming to Minnesota. For paxlovid, 64,970 courses (of 30 pills) will ship, of which Minnesota will receive 880. I expect that these pages will be updated tomorrow with next week’s allocations.

News came yesterday that the US government is buying another 10 million courses of paxlovid from Pfizer, bring­ing the total commitment to 20 million. The new doses won’t begin arriving for months and so will have zero impact on the Omicron wave.

We wrote about SARS-CoV-2 in US deer populations last November. A new study, published in Nature, firms up the conclusion that SARS-CoV-2 is rampant in the US population of white-tailed deer, 30 million strong. The re­search­ers found clear evidence of community transmission among the deer and of at least six separate spillback incidents in which people infected deer. There was no direct evidence of spillover in the opposite direction — that is, infection of a person by deer.

The concern is that deer may represent a large and ubiquitous animal reservoir for SARS-CoV-2, in which the virus could continue to mutate and spill over repeatedly into human populations. (Also: where there are deer there are deer mice, even more numerous and more ubiquitous, which represent another potential reservoir.)

Here is coverage of the deer study from NBC News.

You will probably be hearing about this variant, which is also called “IHU.” (It was first described by French re­search­ers who work at a hospital whose name initializes to IHU.) The WHO has designated B.1.640.2 a Variant Under Monitoring; it has not been given a Greek letter designation. It was discovered a few weeks before Omicron but, unlike the latter variant, has not gained a foothold. Only 20 cases have been observed, all in France. The index case was a man who returned to that country from a trip to Cameroon.

Here is the preprint characterizing B.1.640.2. It has copious mutations, some in spike, but has shown no evidence of being more fit or transmissible or virulent than other variants.

Dr. Jetelina is not worried about it, and that reassures me. 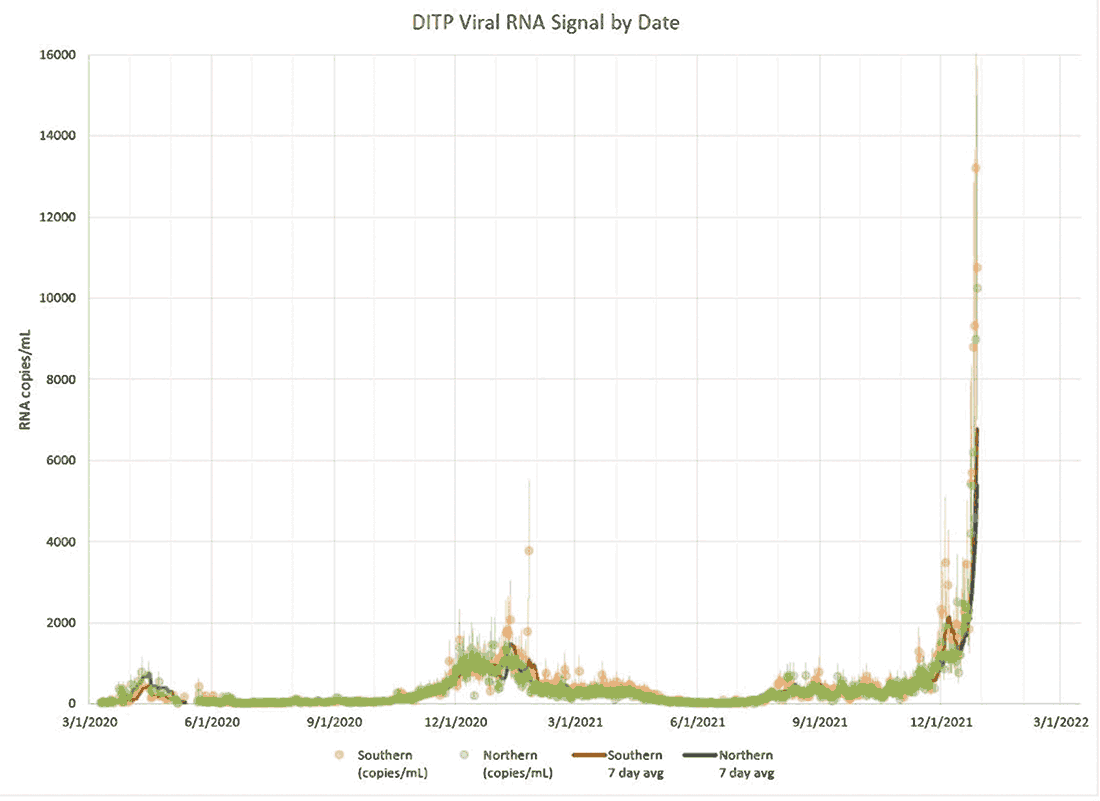 Many of you will have seen the alarming graph, from a couple of weeks back, of Covid in Boston-area sewage presaging the Omi­cron wave that is now crashing over us. This article at NBC News broadens the picture to other polities across the US mon­i­tor­ing wastewater in order to get a heads-up for rising infection levels ahead.

It is a function of exponential growth to render obsolete whatever reactive action you may take. Getting ahead of the curve is the only way to win (and we almost never manage it). Wastewater sur­veil­lance provides what is arguably the earliest warning of rising Covid levels to come; and it provides that warning collectively for large swaths of a city.

Such surveillance is particularly valuable for underserved neighborhoods that do not have good access to medical care or even insurance. Residents of such areas may not be going to doctors or ERs or getting tested, and thus may be all but invisible to public health.

An outfit called BioBot Analytics is profiled in the NBC News piece linked above. This company partners with city and county wastewater treatment operations across the country to set up monitoring. I was pleased to see that Hennepin County is a BioBot client. 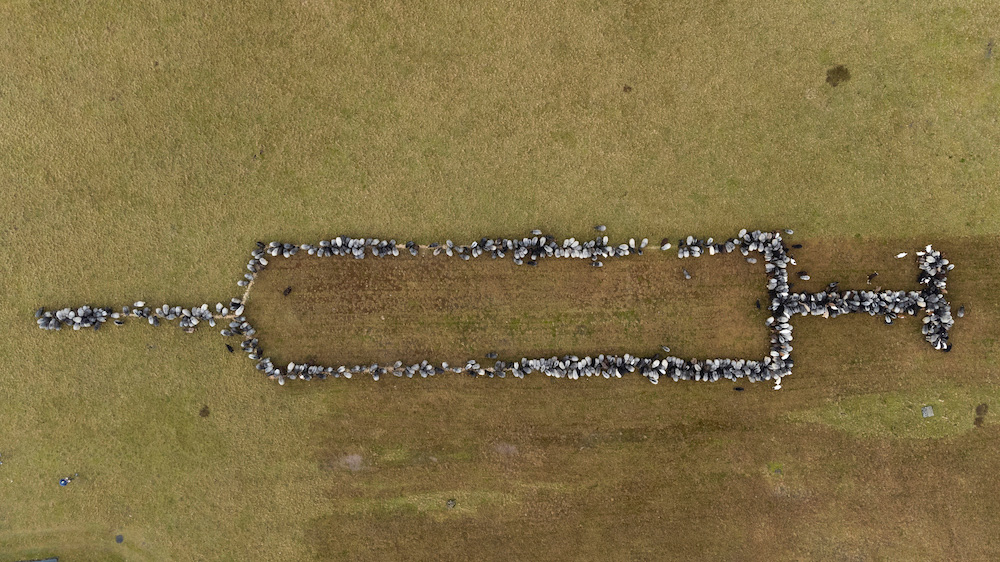 Sheep and goats stand together in Schneverdingen, Ger­many, as they form an approximately 100 meters large syringe to promote vaccinations against Covid-19, Monday, Jan. 3, 2022. (Philipp Schulze/dpa via AP)

The article does not say if the organizer of this event, Hans­peter Etzold, is the owner of the 700 sheep and goats (pic­tured), or what. It does credit shepherd Wiebke Schmidt-Kochan with executing the plan — using bread scattered on the ground in the desired shape (no sheepdogs that I could see). The intent behind sculpting this large sheep syringe, 330 feet in the long dimension, was to encourage Germans to get vaccinated.

Until the pandemic this event came off every winter at Takhini Hot Spring in the Canadian Yukon Territories. Here are photos of the winners, and others, from the 2019/2020 contest. Poignantly enough, that contest closed on March 8, 2020. You all know what happened next.

During the contest period, from December through March, on any day when the temperature was below -20°C (-4°F), contest entrants could submerge, emerge, wait for their hair to freeze, and call over a hot spring staff pho­to­grapher to record an attempt. Winners in five cat­e­gor­ies in the ’19/’20 contest each received $2,000 Canadian and a pass to the hot springs.

Takhini Hot Spring’s website is silent about the missing ’20/’21 and ’21/’22 contests, except for this notation at the Press Enquiries link: “The facility is currently closed.”

Let us hope that a year from now we may travel to Whitehorse, Yukon to freeze our hair. According to Google Maps it’s only a 42-hour drive from here.