Items of recent pandemic news: A new “vaccine for the world,” developed in Texas, is authorized in India; more evidence that Omicron is less severe; to­wards a broad-spectrum vaccine; the CDC’s controversial new guidelines; and more. Plus a frippery.

On Monday the CDC revised downward their guidance on how long people should keep away from others when either ill with Covid-19 (isolation) or exposed to it (quarantine).

Those who found the previous rules confusing — different durations for isolation vs. quarantine, different rules for vaxed vs. unvaxed people, options for testing out early — will probably not find the new guide­lines much simpler:

Here is the summary table of the guidelines from the CDC’s site. 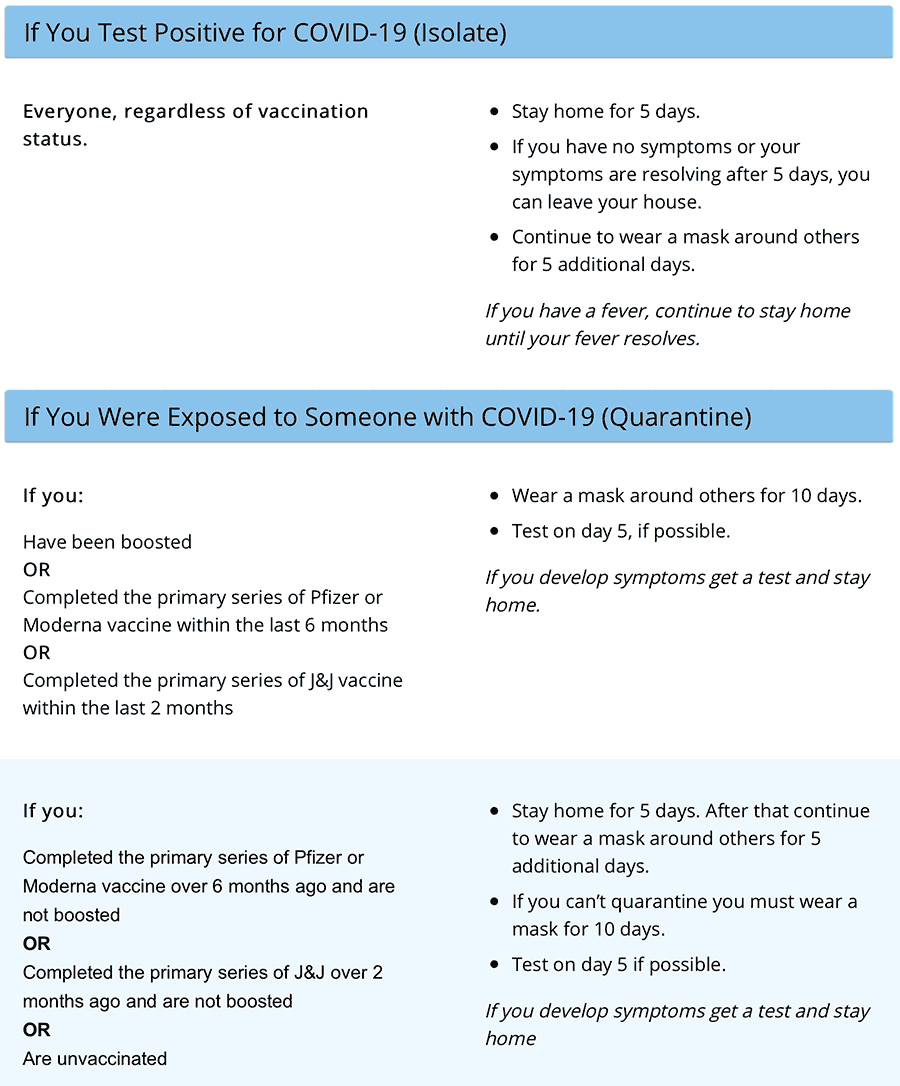 That unexplained phrase “or your symptoms are resolving” seems like a get-out-of-jail-free card for those disinclined to follow the rules.

The CDC’s initial public statement suggested that the change was motivated, at least in part, by the difficulties business were experiencing in the Omicron surge as infected or exposed employees were out for 10 or 14 days. In fact businesses had been lobbying hard for weeks for such a shortening of the duration of staying home. The CDC loosened much more even than Delta Airlines had been asking for.

Now Rochelle Walensky, the CDC director, has told the Washington Post that fears about the economy shutting down in the Omicron wave were very much behind the rule relaxation.

Business leaders love the new rules, but unions and many public health experts do not. Here is the Indiana University chief health officer explaining in an NY Times op-ed what the CDC got wrong.

“Your Local Epidemiologist” Katelyn Jetelina outlines why, from a medical perspective, the new CDC guidelines seem misguided. The CDC presented no data showing that 5 days after test-positive is enough time, and… it isn’t. Vaccinated people clear the virus faster than the unvaccinated (so why are they lumped together?), and for both the mean time exceeds 5 days. All the available studies were pre-Omicron, and the new variant may effectively stretch the infectious period — Omicron-infected people tend to get tested sooner (the incubation period is shorter). And the lack of a requirement for an antigen test to exit iso­la­tion is just inexplicable.

Zvi Mowshowitz’s report on the CDC’s change links to a wide range of reactions and Twitter threads from experts and observers.

The new CDC guidelines will almost certainly result in more disease spread than the earlier guidance would have done — if anybody actually follows them. We are all free to isolate for longer periods and to exit isolation only upon a negative test (or two). But arguably the new rules will allow some essential ser­vices to operate that would have been shuttered under the old dispensation. On balance I can’t disagree with the change. I just wish the CDC had not claimed in the initial announcement that the revision was a result of “following the science.” That half-truth (at best) will further damage whatever credibility the agency still possesses.

Towards a broad-spectrum vaccine

A study published in Nature last week tested plasma from both recovered Covid-19 patients and vac­cin­a­ted (and boosted) people against pseudovirus incorporating spike proteins from Omicron and from earlier SARS-CoV-2 strains. The results reinforced earlier (and smaller) studies showing how much Omicron evades antibodies compared to the earlier variants.

The promising outcome from the study (summary here) was the identification of three antibodies that retained strong affinity for Omicron. They bind to regions of the spike protein that are believed to be conserved as the virus evolves. In fact these regions are unchanged across many coronaviruses, indeed across members of the broader sarbecovirus family.

If these antibodies can be elicited from the immune system by a vaccine, or packaged into a bioavailable treatment, they could represent a mutation-proof weapon against this and possible future spillover viruses from the animal kingdom.

Katelyn Jetelina writes about another approach to developing a pan-coronavirus vaccine. Researchers at Walter Reed Army Institute of Research have been testing compounds that feature proteins from a range of SARS-CoV-2 variants, and the earlier SARS virus, studding the surface of soccer-ball-shaped nano­par­ticles. In one version they tested full spike proteins and in another, just the receptor-binding domains of spike.

The compounds have been tested in pre-clinical trials with various animals (non-human primate results here) and found to induce immune responses. A Phase I trial in humans (72 participants) was begun last April and results are expected imminently.

There is still a long road ahead, Phase II and Phase III trials, but the epidemiologist Jetelina is optimistic about the prospects for this approach eventually leading to a mutation-proof pan-coronavirus vaccine.

The chances of landing in the hospital seem to be lower with Omicron. A South African study found a 70% lower chance compared with Delta; a UK study found 15% to 20%; and one from Scotland, 67%. Ars Tech­nica adds a preprint from a Danish study that found a 75% reduction.

A new vaccine from Texas is authorized in India

Drs. Maria Elena Bottazzi and Peter Hotez (photo here), co-directors of the Center for Vaccine Development at Texas Children’s Hospital, have been working on a protein sub-unit vaccine since the earliest days of the pan­demic. Their candidate, now called Corbevax, has been going through trials without a lot of publicity. Corbevax is old-school, easy and cheap to manufacture. From the first it was intended to be offered widely to low- and middle-income countries, and the technology for manufacture transferred freely around the world.

Corbevax has now received emergency use authorization in India and the developers have signed a manu­fac­turing contract with that country’s Biological E. Limited. One hundred fifty million doses are already available and another 100 million will come online each month hereafter.

Corbevax recently completed two Phase III trials with 3,000 subjects, and the results indicate that it provides better proteciton than the Oxford / AstraZeneca vaccine. Its antibodies are long-lasting and there is good evidence for a T cell memory response.

I found no indication that Corbevax has been submitted for authorization in the US.

It seemed like Israel was on a path to becoming the first country to offer second vaccine boosters (fourth shots) to its people. But that plan is now on hold pending further study. In a development reminiscent of attitudes toward boosters in this country, Israeli politicians were anxious to move forward with second boosts but experts there wanted to see more data on the medical necessity of such a move.

President Biden has rescinded the restrictions on travel from South Africa and seven other countries on that continent. It’s not like they had ever functioned to keep Omicron out of this country.

To reward your patience today, here is a frippery for those who miss Freecell on Windows and those who pine for Solitaire Till Dawn on Mac. Green Felt features 18 solitaire games (including Freecell, of course), four puzzle games, and two arcade games. (Remember Asteroids?) It is all free, and advertising-free, and the proprietors (brothers Jim and David) are highly responsive to bug reports and feature requests.

Visitors can set up a username of their choice (it’s quick to do), and then they have access to the forums, where a lively community of dedicated regulars answer newcomers’ questions. Or they can play anony­mously — about 4 out of 5 do so — and the site retains nothing of their visits.

Games are identified by a large, random-seeming number in a manner that will be familiar to scholars of the Windows 95 Freecell. Gameplay is implemented in Javascript in your browser. When you first visit, you get assigned a game that others are playing at the same time. Subsequent game numbers follow a semi-random pattern that is shared by all current players, so you keep running into the same usernames on the leader boards. The pattern resets on the hour.

The games work well on tablets, so I am told.

This is an old-fashioned site that hews to the founding principles of the internet, before social media and market consolidation changed things for the worse. The people there are nice. Green Felt is a breath of fresh air.