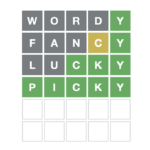 Items of recent pandemic news: Minnesota’s oddly bright prospects; Israel offers a fourth shot; the end of the pandemic as a social phenomenon; and what hap­pens when Omicron hits a population with pre-existing immunity. Plus a frippery.

When Omicron hits a population with widespread immunity

The above does not necessarily mean that Omicron is inherently less virulent. What is often missing from these sorts of statistics is the immunity status of those infected. Over 70% of the South Africa’s people have been infected by a previous variant.

To some extent Omicron evades the protection against infection — neutralizing antibodies — that is con­veyed by a previous infection or vaccination. So the Omicron-infected population contains a higher frac­tion of people who have some immunity already in place.

Anecdotally, the symptoms Omicron induces are different than earlier waves of the pandemic. Instead of loss of smell, headache, trouble breathing — damage caused directly by the growth of the virus — we see sniffles, runny nose, fever. The latter are signs of the immune system working, not of the virus rampaging. They are what you would expect when a primed immune system goes after an invading respiratory virus.

That is why rapid antigen tests in those infected with (or suspecting) Omicron may turn up negative for at least the first few days of symptoms, or perhaps for the entire bout with the virus.

In previous waves we saw transmission of the virus to others a day or two before symptoms appeared. When Omicron hits a vaccinated body, this is less likely. The person may never be infectious at all. The antigen tests are painting an accurate picture.

PCR tests, especially with a day or two delay before the result arrives, are not useful for guiding behavior during an active infection. They are too sensitive, and far too slow for a fast-moving infection. Omicron’s kinetics are faster than previous variants.

In the episode of This Week in Virology that dropped on Christmas day, Dr. Daniel Griffin reports that in his experience, and in his informal surveying among peers, Omicron goes from infection to test-positive in two or three days. Data from a Norwegian study of a superspreader event back this up. Dr. Griffin also notes the silver lining that if symptoms develop before test positivity, we may have a lot less asymptomatic spread to contend with from Omicron.

Here are questions to which you might want the answers, and the test that is appropriate to try to find out.

Donald G. McNeil Jr. chronicles his perspective on how the Omicron wave is de­vel­op­ing in New York City. What he describes is exactly what one would expect when Omicron tears through a population that has some considerable immunity.

Zvi Mowshowitz writes that his whole (vaxed) family recently had mild cold-like symptoms and all re­cov­ered while continuing to test negative. Same deal as above.

These are anecdotes, not data, but they are suggestive. Vaccinated or previously infected people seem to be knocking down the virus before it has a chance to build up even in the upper airway. While vaccinated-then-infected people may be infectious for a time, many of them will not be. And their symptoms will tell them to isolate.

Much of the above analysis was inspired by a posting by Alan Wexelblat to a private mailing list. I will pro­vide a link here to Alan’s post when it goes live elsewhere.

An expert panel of Israel’s health ministry has recommended that everyone in that country over the age of 60, and health-care workers, receive a second booster shot — a fourth dose of mRNA vaccine — at least four months after their first boost. Reuters reports that the panel “further recommended that the time be­tween the second and third shots be reduced to three months from five.”

The WHO must be doing a slow burn. The international organization has spoken out against booster shots in Western countries when much of the world remains unvaccinated.

Omicron infections are rising exponentially across the country and around the world, but Minnesota does not seem to have gotten that memo — judging by Stat News’s acceleration tracker in recent days.

The first image shows the acceleration of the infection rate in MN as derived from data reported on Dec. 21, 23, and 24. For upwards of a week the state has been near the bottom on Stat’s list for how worrying the Covid ac­cel­er­a­tion is per state.

The second image depicts the acceleration rates for three other states on Dec. 24.

This picture could change rapidly if Omicron spreads widely here, which it does not seem to be doing just yet. But for now, enjoy the respite. 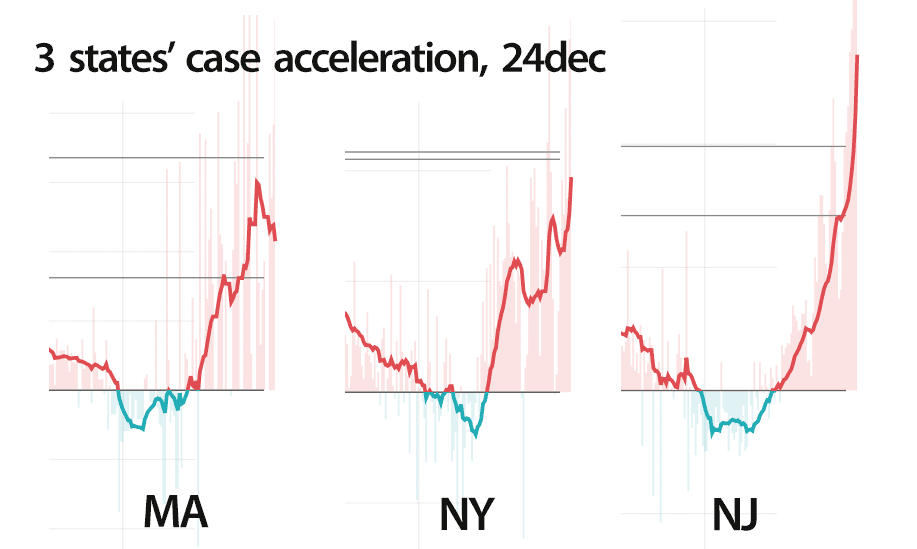 Writing in The Atlantic, Yascha Mounk asks: Is the pandemic over as a social phenomenon? He concludes that, judging by our reactions to the latest variant and wave, it sure looks like it:

Despite skyrocketing caseloads, few pundits or politicians are proposing strict measures to slow the virus’s spread. The appetite for shutdowns or other large-scale social interventions simply isn’t there. This means that we have effectively given up on “slowing the spread” or “flattening the curve.” To a much greater degree than during previous waves, we have quietly decided to throw up our hands.

The Washington Post makes a similar point in a piece on pandemic fatigue: as a society we have settled on a policy of harm reduction, one that seeks to limit the impact of the virus rather than to eliminate it. 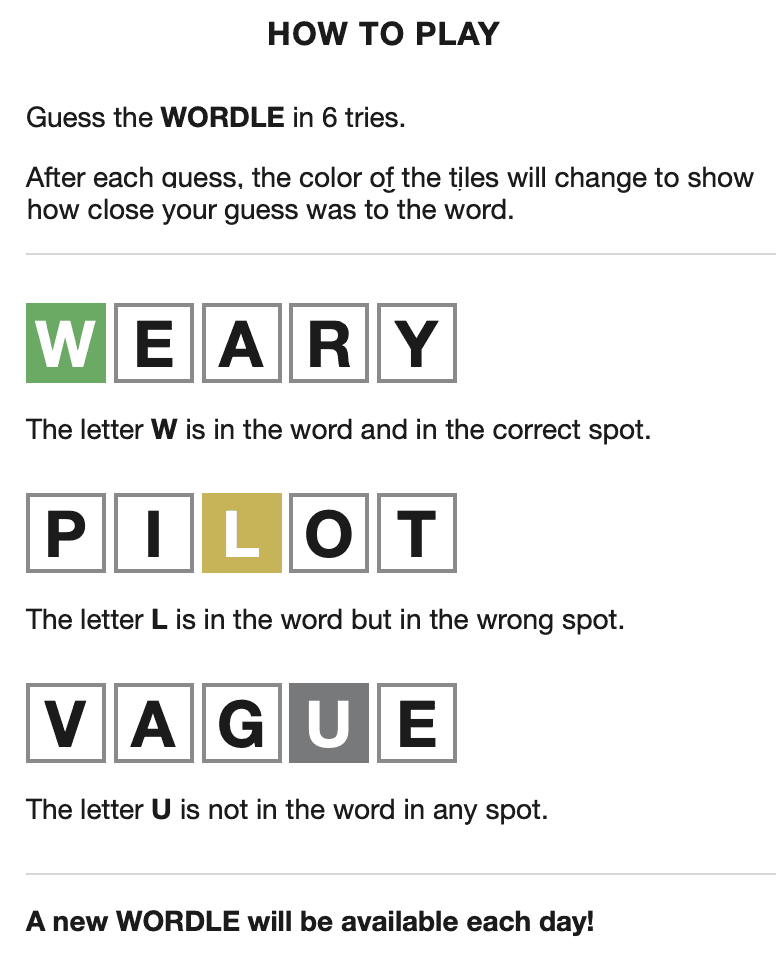 The frippery today is Wordle, a daily word game of deceptive sim­pli­city. You have six tries to guess the five-letter target word, and for each you are shown (graphically) which letters you got right and in the correct pos­i­tion, which are in the tar­get but in a different pos­i­tion, and which don’t appear in the target. Ap­par­ently the game is going viral, because it is getting written up everywhere.

My sole quibble with Wordle is that you can only play it once a day.

It is unfortunate that Wordle took the name of one of the first word-cloud generators to appear on the web. That original Wordle was an elegant and powerful Java applet written by Jon­athan Feinberg in 2008. Java applets have long been dep­re­cated for reasons of security, and wordle.net went dark in 2019. Fortunately I managed to snag the down­load­able app in the brief window of time during which Feinberg was offering it.

I suppose the creator of this new Wordle can be forgiven for expropriating the name. He is Josh Wardle.