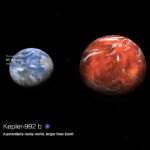 Items of recent pandemic news: Novavax notches some wins; J&J’s vaccine is dep­re­cated; vaccines for young kids will have to wait; the US government is stockpiling an­ti­bodies; the implications of Omicron’s (possibly) faster incubation; and more. Plus a frippery.

If that turns out to be true, it will be bad news for testing in the US. Katherine J. Wu explains why in The Atlantic: faster time from infection to symptoms means that testing has a shorter window of time to catch the virus’s rise in the body. PCR testing becomes nearly useless to catch an infection before its carrier begins transmitting — especially when results take two or more days to come back. If the delay stretches to three or four days, the in­fec­tious period could come and go while the lab does its work.

The original Wuhan strain incubated over five or six days (it can be longer in some cases). Alpha was five days, Delta is four. The suspicion based on Omicron’s meteoric rise is that its incubation time can be three days.

This illustration, shared on Twitter by Billy Quilty, reinforces what was already true before Omicron, but is doubly true now: if you do a rapid antigen test before some gathering, it has to be immediately before to have much chance of being meaningful. 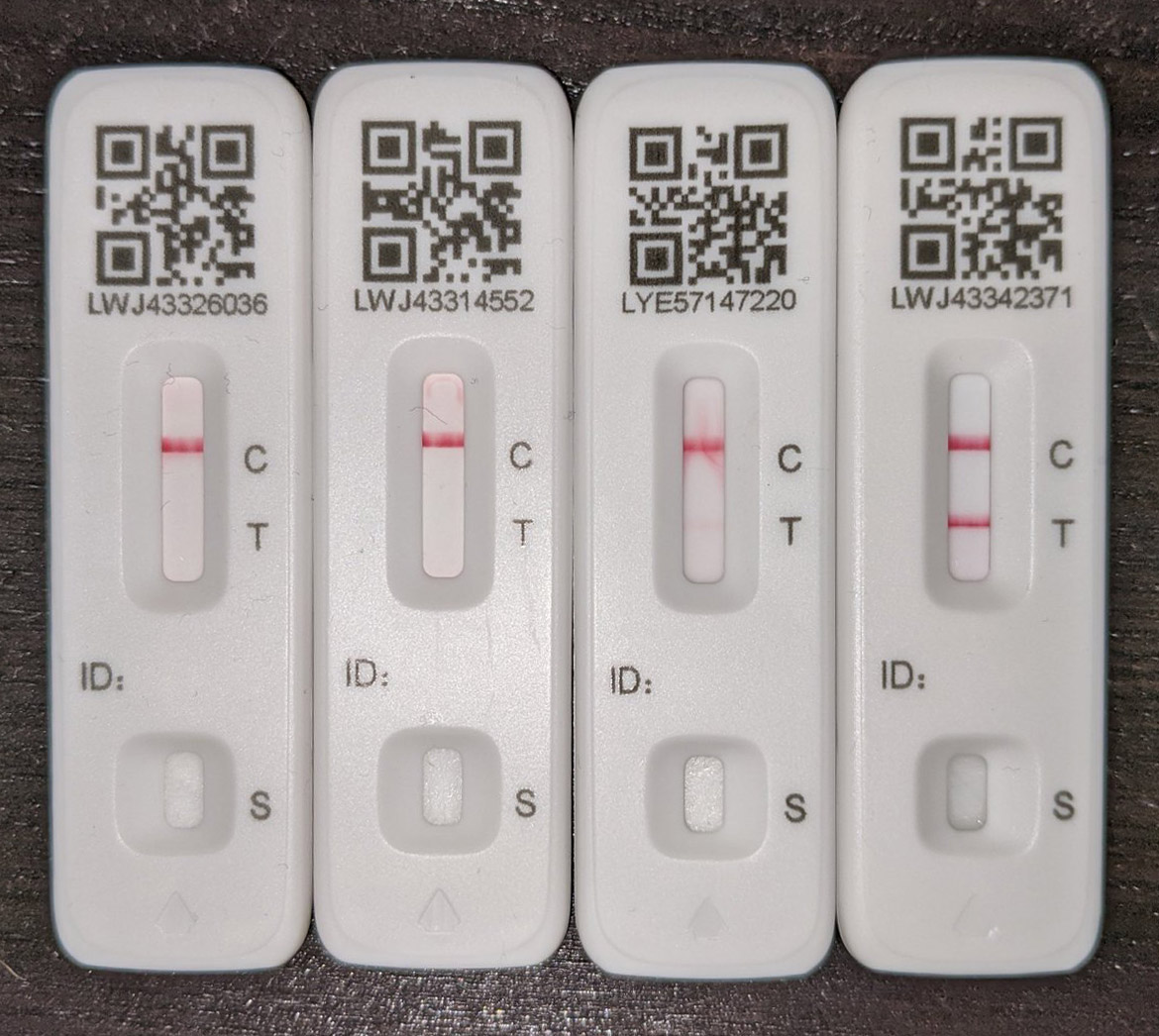 The photo shows the results of four consecutive rapid tests: the morning, noon, and evening of one day and the morning of the next. (Note that this represents $50 of rapid test kit, in the US at this time.) Mr. Quilty turned undeniably positive overnight. The really interesting thing: close examination of the four tests reveals the faintest possible pink line in the third (the evening before). It would be so easy to miss. Any red at all means positive.

If Omicron’s rapid rise to infectivity holds up after fur­ther study, that is also bad news for the oral antivirals that have not even been authorized yet, and for the older intravenous antibody cocktails (whose effectiveness takes a hit from Omicron; see next item). All these are most effective if begun early in the infection: within 3 to 5 days of symptoms. Omicron’s compressed timeline makes the logistics of acquiring and administering antivirals or antibodies even more challenging than they were already.

Less than two weeks after the White House press secretary put her foot in it on a question of the government’s role in Covid rapid testing, the administration announced a plan to ship tests for free to every household that requests them, beginning in January.

My first thought: if it is difficult to find tests now, wait until the supply is all soaked up at the factory by a program that requires you to visit a new custom website to request one. What could possibly go wrong with that?

The government is stockpiling an antibody cocktail

By looking at the locations of mutations on Omicron’s spike protein, scientists can project which of the available antibody cocktails against the virus might continue to work, and which will take a hit. The upshot is that mu­ta­tions occur in just the right (wrong?) places to blunt the effectiveness of the Regeneron and Eli Lilly products; but the one from GlaxoSmithKline and Vir Biotechnology is expected to remain effective.

The Washington Post outlines the federal government’s response to this probability: they have stopped regular shipments of GSK+Vir to the states in order to guarantee the supply of an effective antibody therapy once Omi­cron takes hold across the country.

Of course the supply of the drug will be far smaller than the likely demand in the coming months: about 50,000 courses are on hand and 350,000 will be available by early January. That’s maybe a 3-day supply at the current rate of new cases.

Vaccines for the youngest children delayed

Pfizer, which makes the only vaccine authorized for children as young as 5, hit a glitch in their testing in children younger than that. It means that the trial will not produce results this year, as had been the plan, and availability of vaccine for children down to 6 months old will be put off into the first quarter of 2022 at the earliest.

Pfizer is testing graduated amounts of its vaccine: 10 mg for kids 5-11 (as already authorized), and 3 mg for ages 6 months to 5 years, in two age steps. The anomaly that cropped up was this: kids 2-5 showed a weaker immune response than either those 0.5-2 years or 5-11 years. Some unknown factor of the unknown growth and de­vel­op­ment of the (largely) mysterious human immune system must be to blame. Or: Pfizer got the dose wrong for this age group, as Katelyn Jetelina (writing as Your Local Epidemiologist) speculates.

The trial is ongoing, with both participants and researchers still blinded to who got vaccine and who got placebo. But an outside committee, which had access to the unblinded data, found the anomaly in blood draws from the participants.

The company decided to give the 2-5-year-old children a third dose, still at 3 mg, two months after their 2-dose series. Pfizer got approval for this plan from regulators in the US and elsewhere. So now the entire program takes a 2-month delay.

Pfizer has not released many details of the glitch. For example we don’t know the magnitude of the drop in re­sponse in the 2-5-year-old kids, whether it was significant or merely a bit lower than expected.

Last week a CDC advisory panel expressed concern about a rare side effects tied to the J&J vaccine and voted to give preference to mRNA shots instead. The vote was unanimous. The CDC director accepted the recom­men­dation.

The CDC has collected 54 US cases of a dangerous clotting condition, thrombosis with thrombocytopenia syn­drome (TTS), which are deemed to be related to shots with the J&J adenovirus-vectored vaccine. Nine of those cases were fatal; two more fatalities are suspected to be related. (Seventeen million J&J doses have been ad­min­is­tered in this country, so the incidence of TTS is around 1 in 300,000.) Vaccine-related TTS has been seen in men and women across all ages, but the majority of cases are in women 30-40 years of age.

The CDC panel did not recommend discontinuing all use of the vaccine; they merely voted to advise people to prefer an mRNA vaccine if one is available. The committee did not want to send a discouraging message to the rest of the world, in many of whose nations J&J is in widespread use.

The World Health Organization has now authorized the company’s vaccine candidate, which has been given the name Corovax. This opens up its use in Covax, the program to supply vaccine to low-income countries. Corovax is especially attractive in this scenario because it does not require freezing temperatures for transport or storage.

In a second win for the vaccine, the European Medicines Agency has blessed Corovax, paving the way to its going into arms in the EU.

Frippery: The eyes of NASA 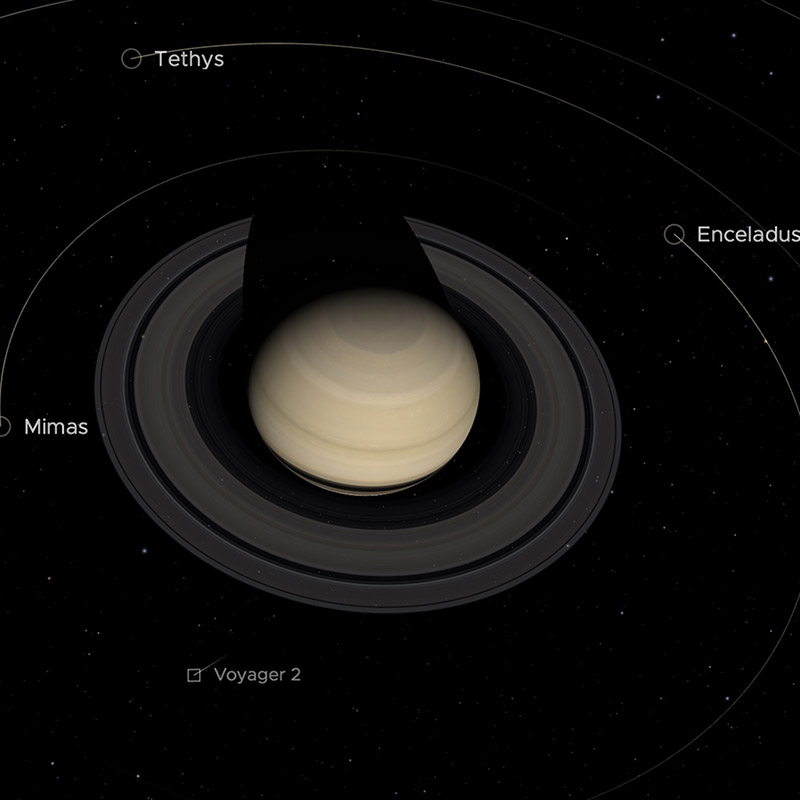 Today’s frippery is NASA and JPL’s interactive explorer for the solar system and beyond. NASA’s Eyes has in­ter­ac­tive features focused on Earth, the solar system, asteroids, Mars, and exoplanets (that’s an artist’s imagining of one at upper left).

The Mars explorer lets you follow the entry, descent, and landing on Mars of the Perseverance rover. You can con­trol the playback speed at 1x, 5x, 10x, 60x, 300x, or 600x real-time. But for my money it is not as fun as the in­ter­ac­tive features that give you control.

The solar system explorer is my favorite. Besides the planets and (all of!) their moons, you can zoom in for details of asteroids, comets, spacecraft, and dwarf planets — for you fans of Pluto and Haumea. A sidebar gives a quick comparison of the sizes of various objects in our neighborhood. This simulation is a real-time orrery: what you see are the actual relative positions and velocities of solar system objects at this exact moment.

[ Note added 2021-12-22: ] The “73% Omicron last week” number was generated by an algorithm of CDC’s Nowcast program, and is implausibly high. Zvi Mowshowitz explains why. We will probably get to 73% Omicron, and beyond, within a week.