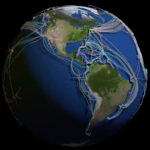 Items of recent pandemic news: Detection in Laotian bats of possible SARS-CoV-2 pre­cur­sors; Covid-19’s effects on the brain; progress towards an antiviral pill; why the US may fail the next pandemic too; and more. Plus a frippery.

The publication of a new Ed Yong pandemic piece in the Atlantic is always cause for celebration — for his insightful reporting and felicitous writing, if not for the sometimes downbeat implications of what he reports. His current article outlines the history of neglect for public-health infrastructure in the US, dating back well over a century, and argues that the next pan­demic will do a number on us all over again unless we embrace some major so­ci­etal changes. I’ll just share a few quotes and urge you to go read Yong for yourself.

“America’s frustrating inability to learn from the recent past shouldn’t be sur­pris­ing to anyone familiar with the history of public health.”

“A pandemic is a course correction to the trajectory of civilization. His­tor­i­cal pan­dem­ics challenged us to make some fairly fundamental changes to the way in which society is organized.” [Alex de Waal, Tufts]

“The promise of biomedical panaceas is deeply ingrained in the US psyche, but Covid should have shown that medical magic bullets lose their power when de­ployed in a profoundly unequal society.”

Towards an antiviral pill

Wouldn’t it be nice if there existed Tamiflu for Covid-19? (Let’s call it Tamicov.) Get exposed to SARS-CoV-2 or develop symptoms, take a course of pills for a few days, and emerge relatively unscathed. CNN has a roundup article on three candidates for such a role that are now in late human trials.

Farthest along is molnupiravir, from Merck and Ridgeback Biotherapeutics. We wrote about earlier phases of its testing last June and February. The companies might report results from a Phase II / III trial and apply for an EUA by the end of this year. The US government has an agreement to purchase 1.7 million treatment courses if the drug is authorized. Merck has said it can produce 10 million in 2021.

Slightly earlier in the pipeline is an investigational protease inhibitor from Pfizer (euphoniously des­ig­na­ted PF-07321332) whose Phase II / III trial dosed the first participants at the beginning of this month. Pfizer is also saying that it could post results by year’s end.

A third antiviral being tested is AT-527 (a.k.a. RO7496998), an RNA polymerase inhibitor from Roche and Atea Pharmaceuticals. There does not seem to be much information on this trial aside from a “small, early peek” last June. Results are expected before the end of 2021.

Covid-19’s effects on the brain

A recent preprint (not yet peer-reviewed) indicates that Covid-19 may destroy neural tissue, either directly or as a result of in­flam­ma­tory processes, even in mild or asymptomatic cases. The online publication The Conversation has a discussion of these results by psychology professor Jessica Bernard, who studies brain changes in aging. Bernard is accustomed to seeing some amount of brain shrinkage with aging, and not only in cases of Alzheimer’s or the like.

The study is based on brain imaging of people in the UK. The researchers located 401 people who had pre­vious brain scans on file and had subsequently contracted Covid-19. They matched them with a similar number of previously imaged people who had not been infected with SARS-CoV-2. In the recovered Covid-19 patients, but not the controls, they found a “pronounced reduction in grey matter thickness,” an increase in a marker for tissue damage, and reduced brain size and increase in cerebrospinal fluid volume. The P values are impressive, in the range of 10-4 to 10-6 — so the results are extremely unlikely to be due to chance.

These findings were the same in patients who had been hospitalized and those who had not. As Bernard summarizes this unnerving result, “People who had been infected with Covid-19 showed a loss of brain volume even when the disease was not severe enough to require hospitalization.”

It is not known whether or not such damage can be healed with time.

I have to wonder whether this phenomenon is behind some of the widespread reports of brain fog in suf­fer­ers from long Covid.

Researchers who study coronaviruses in bats have located what might be precursor viruses of SARS-CoV-2 in Laotian bats. Here are Vincent Racaniello’s blog post, the preprint paper, and a detailed discussion of it on This Week in Virology.

Taking samples from bats in seven limestone caves in northern Laos, the researchers identified three cor­ona­vir­uses — dubbed BANAL-52, -103, and -236 — featuring a SARS-CoV-2-like spike protein capable of binding to ACE2 and entering human cells. As Raciniello writes, “…the RBD [receptor binding domain] encoded in these BANAL genomes are closer to SARS-CoV-2 than that of any other known bat virus.”

The BANAL- viruses do not sport a furin cleavage site; this infectivity-enhancing feature might have been se­lec­ted for following spillover to another species (possibly humans).

This research bolsters the case for a natural origin for SARS-CoV-2. Racaniello writes: “SARS-CoV-2 likely arose from recombination of viruses circulating in different species of Rhinolophus bats in the limestone caves of South China and Southeast Asia.”

As promised, Pfizer submitted to the FDA the data it had collected on its vaccine’s use in children 5 to 11 years old. Here is the company’s announcement press release; no public data accompanied the an­nounce­ment. However, the company said it will not complete its formal FDA application for EUA status for a few more weeks. This would probably push the availability of kids’ shots into November, which has to be disappointing to millions of parents who were hoping to start getting their children immunized by Hal­lo­ween.

Frippery: fiber on the ocean floor

Don’t know about you, but I have long been fascinated by the physical stuff that comprises the internet: mas­sive data centers and connection points hidden in plain sight, buried fiber susceptible to the ravages of back­hoes, cables flung across the world’s oceans. (Though the Victorians did that latter one first.)

Here is an up-to-date animated 3D rendering of earth’s submarine fiber-optic cable network. Only 30 seconds of your time, but my hope is that it will send you off down a rabbit hole of internet infrastructure.