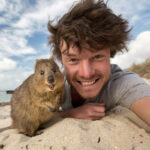 Items of recent pandemic news: Visualizing the pandemic’s acceleration; the first DNA vaccine is authorized in India; the WHO extends its (mostly ignored) call for a moratorium on boosters; President Biden mandates vaccinations; and more. Plus a frippery.

Yesterday President Biden announced a sweeping program to get more US citizens vaccinated. Among the provisions: every company with more than 100 employees will have to require vac­cin­a­tion (or periodic testing) — this rule will cover an estimated 80 million employees. Everyone who is employed by a facility that takes Medicare or Medicaid funds will have to be vaccinated — 17 million more. All US government employees (4 million) and contractors (millions more) will have to get vaccinated within 75 days; the testing exemption that has been in place will end.

The president also urged school districts to require masks, and said that the federal government will pay any teacher who loses salary because their state is fighting masking (see for example Florida, Texas).

The employer mandate will be implemented by rules to be issued by OSHA, the Occupational Safety and Health Administration of the Department of Labor. One important aspect of these upcoming rules: companies must provide paid time off both for vaccination and for recovery from any side effects of vaccination. I believe that this provision alone will add millions to the roster of the protected.

A recent survey of companies found that 52% are already planning to have a vaccination mandate in place by year’s end, and 21% already do.

Republican governors and other politicians vowed to fight the mandates. Biden responded, “Have at it.” The president had said in yesterday’s address introducing the measures: “If those governors won’t help us beat the pandemic, I will use my power as president to get them out of the way.”

This extensive thread on Metafilter brings out some of the subtleties and early reactions to the executive order. For example, one poster points out how Biden’s action gives cover to businesses (such as hospitals) in right-wing territories that want to issue a mandate but are afraid to do so on their own initiative.

On August 20, India authorized the first SARS-CoV-2 vaccine based on plasmid DNA technology, for use in people age 12 and up, after a Phase III trial in 28,000 volunteers. ZyCoV-D achieved 67% efficacy against symp­tom­atic Covid-19 at a time when the Delta variant is circulating widely in that country. The trial included people ages 12 and up, and ZyCoV-D is authorized for that population — the first vaccine available in India for teenagers.

While DNA technology has been in development for over 30 years, alongside mRNA, until now DNA-based vaccines have not shown such high efficacy.

The manufacturer of the new vaccine, Zydus Cadila, expects to have 50 million doses available by year’s end, and the Indian government will begin putting it into arms later this month. The vaccine does not require a needle, instead being deposited into the skin by a device called a PharmaJet.

DNA formulations are more stable than mRNA — not requiring as cold temperatures for shipping and storage — and are said to be easier and cheaper to manufacture. These advantages explain why a dozen DNA-based vaccines against SARS-CoV-2 are in clinical trials around the world and a similar number in pre-clinical research. An even greater number of DNA-based approaches are being investigated for other diseases, including Zika, influenza, and cancer.

On the downside this vaccine requires three doses spaced 4 weeks apart. While its manufacturer has said it will be “affordable,” the requirement for a specialized delivery device would seem to limit its usefulness in remote or impoverished populations.

DNA vaccines take a more circuitous route to stimulating the immune system than ones based on mRNA. The DNA has to make its way all the way into the cell’s nucleus, where it directs the generation of mRNA, which then wanders back out into the cell’s cytoplasm; there things unfold just as with an mRNA vaccine. Among the obstacles facing the uptake of DNA vaccines, I predict, will be the difficulty of convincing skeptics that they do not alter people’s germ plasm once the drug’s DNA arrives inside the cell nucleus. (They don’t.)

On Wednesday the WHO’s director-general pronounced himself “appalled” by rich countries holding on to vaccine supplies and called for an extended moratorium on booster shots in the First World through the end of this year. Western countries, including the US, UK, Israel, Germany, and France are continuing to ignore this call and proceed with plans to offer boosters to their citizens. 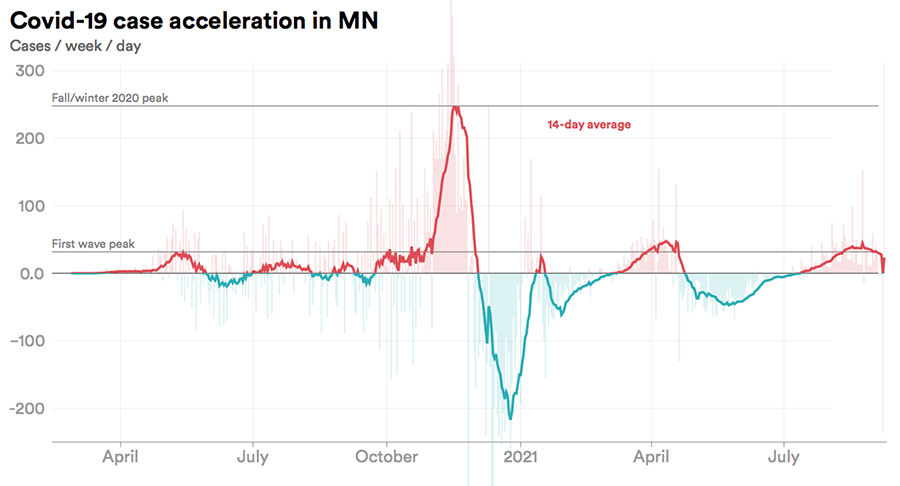 If you want to know whether the pan­demic is about to get worse, or better, in your area (or any area), a good measure to look at would be its acceleration: the rate of change of new cases. Stat News has produced a dashboard, updated daily, tracking the 14-day average of acceleration in each state. According to the dashboard, a short while back Minnesota was on the verge of a turn for the better, but now things are looking more iffy.

The saga of tainted Moderna vaccine in Japan continues to unfold. Moderna’s distributor in that country, Tak­eda, has announced a deal with Japan to supply 150 million doses of Novavax vaccine there, pending regulatory approval. Takeda has already been handling clinical trials an regulatory submissions for Novavax in Japan, and will be doing fill-and-finish steps of manufacturing the vaccine. Takeda’s reputation in Japan has been tar­nished by association with Moderna’s contamination woes.

Your frippery today introduces Allan Dixon, a Scotsman who travels the world taking selfies with animals. Here is a scattering of his efforts from My Modern Met, Bored Panda, HuffPost, and Mashable.

I don’t link to Dixon’s Twitter or Instagram accounts because they contain a broader range of postings than just his animal whisperings, in­clu­ding ones about his fascination with NFTs (non-fungible tokens). Don’t ask.