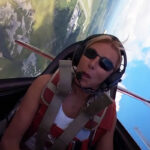 Items of recent pandemic news: The intelligence community on SARS-CoV-2’s origins; the EU tightens up with American travelers; Delta doubles the chances of hospitalization; a new variant out of South Africa; and more. Plus a frippery.

This new lineage was first observed in South Africa in May, and has now been seen in seven countries. It makes up only 3% of infections in SA at the moment (that country is dominated by Delta, as is the US) but its prevalence is growing. The lineage does not (yet) have a WHO Greek letter designation as a Variant of Interest or Variant of Concern. It possesses an unusually large number of mutations, being 1.7 or 1.8 times as “far” phylogenetically from the ancestral Wuhan strain as the average of all variants observed so far (see the illustration). 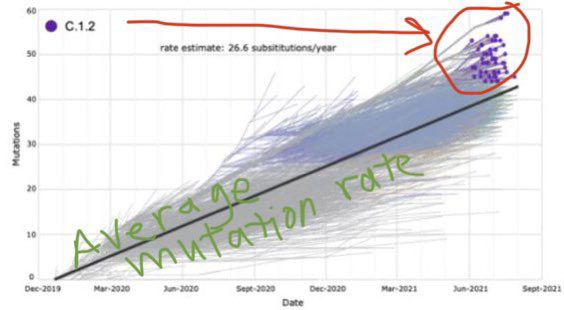 Some of C.1.2’s mutations are the same as the ones believed to confer a degree of immune escape on beta and Delta; others have not been seen before in the wild. Experiments are un­der­way to determine how this variant behaves in the pre­sence of immune antibodies. So far indications are that current vaccines continue to work.

The variant was picked up by the Network for Genomics Sur­veillance in South Africa. Here are the preprint describing what is known about it so far and a Twitter thread from Dr. Eric Feigl-Ding speculating on what it might portend.

Three months ago President Biden ordered the US intelligence community (IC) to investigate the origin of the coronavirus and report back in three months. The Director of National Intelligence delivered that classified re­port last Thursday and released an unclassified summary on Friday.

To no-one’s surprise, the matter remains inconclusive (and time is running out).

Here are the summary’s main conclusions:

A day ahead of the briefing to the president, China’s Communist Party pushed a conspiracy theory that the virus actually originated in a US military laboratory at Fort Detrick, Maryland.

In a segment recorded on Friday, the hosts of This Week in Virology went over in detail the arg­u­ments in a journal pre-proof published in Cell and authored by an international group of experts, including some of the investigators who had visited China early this year at the behest of the WHO. This paper presents the arg­u­ments for both natural origin and lab leak, and essentially demolishes the case for the latter. If you want to see the TWiV experts discuss this in detail, watch for 17 minutes beginning at 45:00.

The EU recommended in June that member states gradually lift travel restrictions from a number of states on a “safe list,” and the US was included. Now the bloc has removed the US from the list (here is the official an­nounce­ment). The average infection rate here is eight times the EU’s safe threshold. The EU has passed the US in the percentage of its citizens vaccinated. Despite this we have not welcomed visitors from the EU, vac­cin­ated or not, since travel was restricted almost 18 months ago. (There was a brief exception as the pre­vious president lifted the restriction on the way out, but President Biden quickly reimposed it.)

The recommendation from Brussels is not binding on member states — they can set their own policies for who is allowed in. The Washington Post reports:

Officials maintained that if European countries accept proof of vaccination, they should continue to admit inoculated travelers, regardless of where they are from, as long as they have received a full regimen of an approved vaccine.

We have all heard (ad nauseam) that Delta is more transmissible than other variants. But does it cause more serious disease? A new study suggests that it does, at least by the measures of hospitalization or ER admission. A large study in England (over 43,000 Covid-19 patients in April and May of this year) showed that Delta was 2.5 times as likely as alpha to land the patient in the hospital, and 1.5 times for the ER. Here is a summary from CIDRAP, the U. of MN’s Center for Infectious Disease Research and Policy.

Internist and epidemiologist Céline Gounder writes in The Atlantic that doctors, scientists, and public officials must communicate clearly to the American people that we are not going to eliminate Covid.

That was a conceivable goal last year before vaccines were available, when the enemy was the (milder) Wuhan strain of the virus, and before we appreciated the extent and stubbornness of anti-vax sentiment. Now, we know that herd immunity is off the table. This virus will be with us indefinitely.

We must forget the idea of never catching Covid. We will all catch it, multiple times, like a cold or the flu. Of the vaccinated ones, 99.99% will survive the first infection, and the probability will go up with each exposure (by infection or booster).

We developed unrealistic expectations of what vaccination could do beginning with the release last March of data showing that the mRNA vaccines were 90% effective at preventing infection. This is an unexpected super­power these vaccines demonstrate, soon after inoculation, and it fades. What the vaccines continue to do is prevent serious illness and death, as they were designed to do. Gounder writes:

Unfortunately, health experts and public officials have done a poor job of ex­plain­ing that while vaccines provide partial protection to individuals against infection and transmission, their most important benefit is at the population level. The more people get vaccinated, the less transmission occurs in the community, re­ducing everyone’s risk of infection.

As Dr. Daniel Griffin says each week on TWiV: “Vaccination is how this pandemic ends.”

6. Coping strategies for that “here we go again” feeling

This Washington Post piece has good advice and practical strategies for moving forward in the morass of sticky emotions engendered by this roller-coaster of a pandemic. It’s worth a read. In short:

The frippery today is an introduction to Patty Wagstaff, one of the most decorated acrobatic and airshow pilots of all time. This virtual airshow is 13-1/2 minutes of sheer joy as you ride in the cockpit with Wagstaff via a 360° GoPro camera, whose view you can control (click and drag). The bubble cockpit gives an unobstructed vista. Check out the Immelmann (half loop with half roll) at 4:06.

Note: the video wouldn’t play reliably for me in Mac Safari, something that is happening with increasing and ag­gra­va­ting frequency. Chrome and Firefox work fine. The video will give your CPU and GPU a workout.