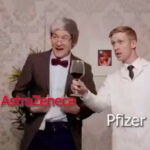 Items of recent pandemic news you may have missed: Moderna kids’ trial is enrolling; a new variant seen in Polish mink; a rapid-testing approach to in-person schooling; the tidal wave of vaccine mandates; and more. Plus a frippery.

As predicted, we are seeing a spate of announcements of organizations requiring vac­cin­a­tions — in these two recent cases contingent on the FDA issuing full approval for the Pfizer vaccine. The first is the University of Minnesota’s policy, announced on Monday; the second is the US military’s mandate. For the latter there is an avenue to a mandate even before full approval, if President Biden signs off on it, which he has indicated he would do.

A small study published in the MMWR indicates that the risk of reinfection is reduced by more than half in those who are vaccinated after recovering from Covid-19. According to the NY Times summary of the research, “the addition of a vaccine offered better protection than the natural immunity generated by their original bout with the virus alone.”

Schools in Massachusetts will be trying an experiment to reduce the school time lost to quarantining, an approach pioneered in Utah earlier in the pandemic. Students who are exposed to the virus, instead of withdrawing from in-person instruction and quarantining for 10 days, will be tested daily using the Abbott BinaxNOW rapid assay. The earlier experience in Utah showed that only 1% of students who had been exposed went on to develop disease. The “test and stay” protocol in 13 schools saved over 109,000 student-days in which instruction could be in-person instead of virtual.

The mRNA vaccines from Pfizer / BioNTech and Moderna have enjoyed smooth sailing, in terms of unwanted side effects, compared to the adenovirus-vectored shots from Oxford / AstraZeneca and J&J / Janssen. Now the European Medicines Agency is scrutinizing “several” cases of a skin condition and two kidney disorders, to see if they might have been caused by the mRNA vaccines.

The publication Fierce Pharma characterizes the conditions under observation this way:

Erythema multiforme causes round skin lesions which may also affect mucous membranes in internal body cavities. Nephrotic syndrome causes the kidneys to leak too much protein into the urine. Glomerulonephritis causes inflammation of the tiny filters in the kidneys.

The EMA did not say how many cases of each condition they are watching. Over 370 million people in Europe have received one of the mRNA vaccines.

As we have seen, mink in farms are highly susceptible to infection by SARS-CoV-2 passed on from humans; and the animals can pass it back to people. Denmark and The Netherlands culled their entire mink populations and shut down the mink farming industry in those countries. Now comes word that farmed mink in Poland have caught the virus and grown a new variant (as yet unnamed) that reinfected at least one person.

Fifteen out of 91 mink (17%) tested on one Polish farm were positive for a new variant of SARS-CoV-2. This variant “included two mutations in the spike protein (G757 and C1247F), which have not been seen simultaneously in any of the SARS-CoV-2 sequences in the GISAID database,” according to the CIDRAP writeup linked above. Researchers have not yet determined the characteristics of the new variant. Here is the study in Emerging Infectious Diseases.

6. Trials of Moderna vaccine in kids open in Minneapolis

Two trials are enrolling now at the Clinical Research Institute, one for children 2 to 5 years old, the other for ages 5–11. Over 800 children were already enrolled at the time of the WCCO article (2 days ago), and the researchers were seeking 70 more. All the participants will get half the dose given to adults: 50 μg. (For comparison, Pfizer has chosen to dose kids at 1/3 of an adult’s shot, or 10 μg for that vaccine.) The clinician running the effort said that he hasn’t seen such demand for a place in a clinical trial in 30 years.

Your frippery today is a (quick, low-resolution) video available only on Twitter. What if Pfizer threw a cocktail party and all the vaccines came? Except for the Chinese, who weren’t invited. And the WHO, whom Sputnik turned away at the door. Be on the lookout for the Abbot & Costello reference.