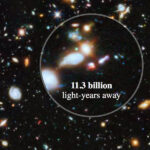 Items of recent pandemic news you may have missed: Emergent gets a manufacturing green light; an antibody cocktail is authorized for prophylaxis; the nations planning to issue booster doses; and the whiplash engendered by the delta variant. Plus a frippery.

It’s safe to say that many people and institutions are reeling with the changes in the pandemic status quo brought about by delta. The vaccinated among us may have thought, up till early July or so, that the pandemic was behind them. Then the CDC re­im­posed masking recommendations one week ago, followed by publication on Friday of some of the data behind the policy tightening (slide deck — analysis of Provincetown cluster). Delta is as contagious as chickenpox — much more so than the flu, the common cold, or the original SARS-CoV-2 strain.

As the CDC’s messaging failed to make clear, there is not evidence that vaccinated people can transmit SARS-CoV-2, especially while asymptomatic. The evidence says that their early RT-PCR Ct values can be equivalent to the unvaccinated; but this does not mean that infectious virus is present. There is evidence that the vaccinated clear the virus faster, so even if they were infectious it would be for a shorter time.

Last May’s relaxation of masking for the vaccinated was epidemiologically sound but social­ogic­ally unwise. The current surge in infections may have been caused in no small part by unvaccinated people dropping their masking habit right alongside those who were im­mu­nized. 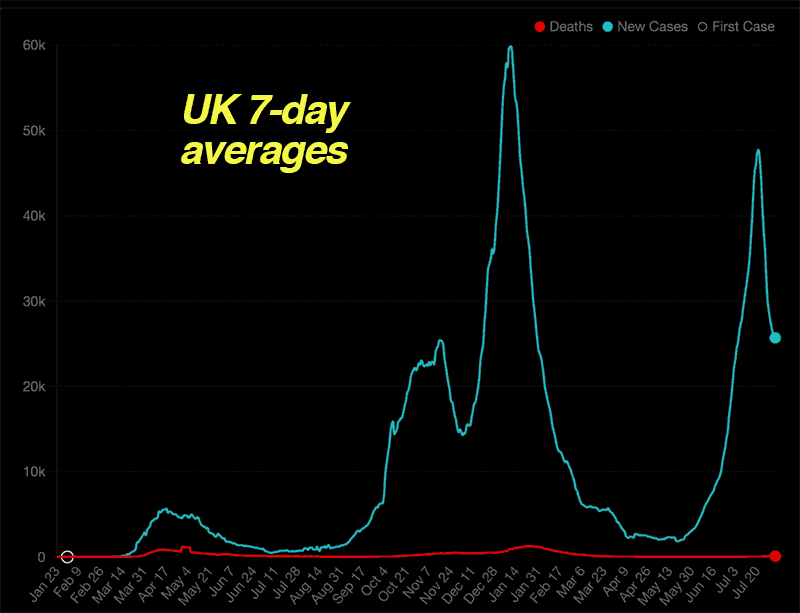 When will the current US surge end? Model­ing suggests that the peak might arrive any­where from mid-August to early Sep­tem­ber. Experts are watching with puz­zle­ment what is happening in the UK, where delta’s sharp rise was followed by a steep drop — which is still holding (see the figure). If the pandemic goes similarly in the US, we should peak in August; we are about a month behind England’s time­table. There are differences in the US’s pattern and distribution of the unvaccinated that suggest that the UK experience might not be replicated here.

The return of unvaccinated kids to school in September is a major wild card in any attempt at prediction. Much will depend on how much non-pharmaceutical intervention (masking, distancing, hand-washing) is mandated, and whether vaccination is required for adult staff.

By one count, 11 nations have announced the intention to give third shots to their citizens. The list includes the UK, Germany, UAE, Israel, Switzerland, Singapore, and Russia. The plans of these mostly wealthy nations have sparked not a little outrage while most of the world has no access to vaccines.

Meanwhile, in the US where Pfizer has applied for authorization for a booster but authorities have expressed skepticism that such are needed, some people are chasing third shots regard­less, and creating strains in the healthcare system.

The FDA has authorized Regeneron’s two-antibody cocktail for use in preventing progression of Covid-19 in people exposed to the SARS-CoV-2 virus. Previously the cocktail could be used in treatment of an early-stage SARS-CoV-2 infection, but not for prevention. The change will have most effect in congregate housing settings such as prisons and nursing homes.

Remember the J&J vaccine? Remember the Baltimore facility that spoiled 75M doses of it? The FDA has now cleared Emergent’s plant to ship product. Not that anyone is clamoring for it now, at least in this country.

The frippery today is astronomical. Last January I commended to you the Astronomy Picture of the Day site (APoD). Today I want you to visit one particular APoD picture — an enhanced version of the Hubble Ultra Deep Field.

The HUDF, displaying around 10,000 mostly ancient galaxies, was first produced in 2003 when Hubble stared for 277 hours at a tiny, “empty” patch of sky. For years I have used the HUDF image as the desktop background on my computer.

Yesterday’s APoD annotates the HUDF in a compelling way. When you hover your pointer over a galaxy in the image, a popup tells you how distant it is and a tone sounds to give you an aud­itory cue to its remoteness, with lower tones keyed to more distant objects. Note: the audio feature worked for me only in Chrome, not in either Safari or Firefox.

If you are ready to have your mind completely blown, try this European Space Agency-produced fly-through deep into the heart of darkness of the Hubble Ultra Deep Field.