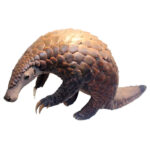 Items of recent pandemic news you may have missed: The animals sold in Wuhan’s wet markets; animal reservoirs for SARS-CoV-2; and animal vaccinations. Plus the usual frippery, this one animal-themed as well.

A vaccine for zoo animals

We have discussed the animals that have been infected by the SARS-CoV-2 virus from their contacts with humans — gorillas, cats and dogs, and of course mink. Now humans have begun to vaccinate our animal friends, the ones living in zoos, against this virus. The NY Times reports: “Zoetis, a veterinary pharmaceutical company, is donating 11,000 doses of the [experimental] vaccine to about 70 zoos as well as sanctuaries, universities, and other animal conservation sites in 27 US states.”

What animals are susceptible to infection by SARS-CoV-2? We’re aware of a few of them (see above), but re­search­ers would like to know the full roster so we could keep an eye on wild populations and perhaps head off (or at least react more quickly to) a new spillover event. A study published in Emerging Infectious Diseases describes injecting active SARS-CoV-2 virus into various animals, which according to CIDRAP resulted in “viral shedding in deer mice, bushy-tailed woodrats, and striped skunks but not cottontail rabbits, fox squirrels, Wyoming ground squirrels, black-tailed prairie dogs, house mice, or raccoons.” (I note that infecting animals by injection is a poor model for the dangers posed by the animals’ normal interactions with humans.) Last fall This Week in Virology talked with Tony Schountz, who studies SARS-CoV-2 in deer mice. These animals, present in every US state, would make for one of the more worrying possible animal reservoirs if the virus spread among them.

Here’s a paper in Nature from researchers who were very much in the right place at the right time. From May 2017 to November 2019 they studied the animals sold at the wet markets in Wuhan — not just the now-infamous Huanan Seafood Wholesale Market, but also 16 others. The great majority of the animal sales the report records were illegal at the time; see this eye-opening table from the report. By far the most interesting fact to emerge from this study: there were no bats and no pangolins among the products sold over 2-1/2 years in these 17 mar­kets. This work casts doubt on the theory that the virus jumped to humans out of Wuhan’s wet markets. Recently the crew at This Week in Virology devoted 27 minutes to discussing this paper.

A live cam showing four kestrels, who were hatched in a nest on a bed of shattered safety glass high in a build­ing in Porto, Portugal. Note that it is 5 hours later there than in Minnesota, so don’t be surprised if at times the live cam shows impenetrable darkness.