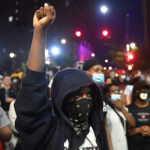 The conclusion is early and tentative, but it is good news indeed: Of the thousands of people who were tested for Covid-19 after attending protest rallies in the Cities, only 1% or 2% have tested positive.

Public health officials say this degree of positive results is indistinguishable from the background level of community transmission of the disease.

These results come from the testing of those who protested in the first week after the killing of George Floyd. As the local protests got started earlier than those in other parts of the country, Min­neap­olis is acting as a bellwether for other cities that saw large-scale gatherings.

Experts are not totally sure what accounts for the apparently low level of Covid-19 transmission. A high degree of mask-wearing may have contributed; and simply being outdoors, in an essentially unlimited volume of moving air, probably played a part. The effect of ultraviolet light in sunlight killing the virus probably was not a big factor, as most of the protests happened after dark.

We’ll see what develops as results from more of the post-protest testing come in; but for now public health work­ers are sighing in relief, even as they brace for news that will follow the president’s rally tomorrow in an enclosed indoor space in Tulsa, OK.