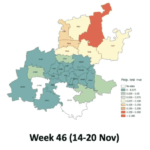 This could be something. South African scientists grew concerned that a new SARS-CoV-2 variant is making inroads against Delta in one province of the country. Today (Thursday Nov. 25) they briefed public health authorities and others in government, up to and including the president, and held an online briefing for the public. That link picks up at 12:45 into the briefing, where Professor Tulio de Oliveira spends about 11 minutes explaining the reasons for the concern.

South African scientists have kept the WHO informed and have asked for an urgent meeting of the agency’s Technical Working Group, which is scheduled for tomorrow, Friday Nov. 26. Yesterday the WHO named B.1.1.529 as a Variant Under Monitoring. The SA researchers expect them to elevate it to a Variant of Concern tomorrow, and to give it a Greek letter designation.

The next letter in the sequence is nu.

B.1.1.529 has a high number of mutations beyond the ancestral strain — over 50 in total and 32 in spike alone, by Oliviera’s count. Delta had 16 spike mutations. Oliveira pointed out that the highly immune-escaping beta variant had three mutations in the spike protein’s critical receptor binding domain; Delta had two; and B.1.1.529 has 10. Some of the new variant’s mutations are familiar to researchers, and that explains their concern — they are mutations that can lead to increased transmissibility and also to immune escape. Yet others of the new variant’s mutations have not been seen before and their effects, if any, are unknown. Around-the-clock research projects are under way to learn more.

In the one SA province, Gauteng, where researchers have concentrated their genomic surveillance in the last few weeks, SARS-CoV-2 infections have grown exponentially, and the proportion of B.1.1.529 among them has risen steeply against the dominant Delta variant. In fact the new variant’s gain against Delta has been far faster than any variant has exhibited in the past. 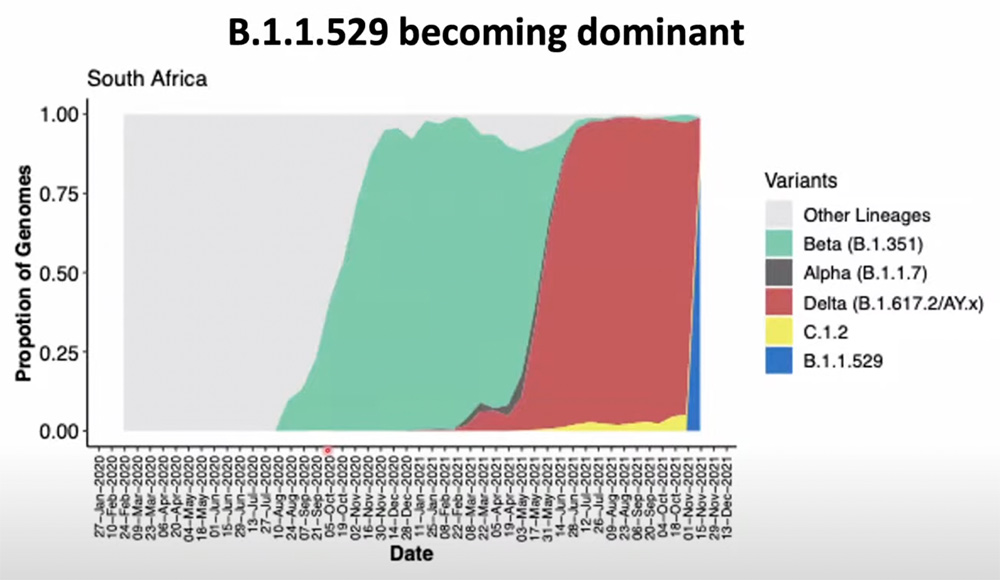 The absolute numbers are still small, and this could be a blip — but it is how new variant-fueled pandemic waves begin.

The new variant shares the “S gene dropout” mutation with alpha, and so like its predecessor stands out in one particular PCR assay, that made by TaqPath. This happy coincidence gives epidemiologists a quicker way to estimate the variant’s spread and growth, compared with waiting days for full genomic sequencing. While attention has been focused on Gauteng province, the S gene dropout evidence indicates that the variant is rapidly taking hold in multiple provinces in South Africa.

B.1.1.529 has also been observed in neighboring Botswana and, concerningly, in Hong Kong — carried there by a traveler from South Africa.

Here is coverage from a South African outlet yesterday, headlined “Covid-19: New B.1.1.529 variant becoming dominant in SA, says health minister.” This Twitter thread by Prof. Oliviera presents some of the figures from his presentation yesterday. On Tuesday this thread from virologist Tom Peacock alerted the world to B.1.1.529.