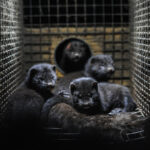 Denmark is killing 15-17 million farmed mink, and an entire industry, because a strain of SARS-CoV-2 spreading among them — and in humans — shows worrisome mutations that may portend trouble for most vaccines currently under development.

Mink are highly susceptible to catching Covid-19 from humans (as are their relatives, fer­rets), and the conditions of close captivity on farms provide an ideal environment for an infection to spread. Outbreaks had been reported beginning last summer on mink farms in the Netherlands, Spain, and the US (in Utah). The Danish outbreak was the largest and the most alarming, once evidence emerged of a dangerous mutated strain that had re-infected humans.

The Scandinavian country’s 1,100+ mink farms account for 40% of the world’s supply of the luxury fur. As a matter of urgency Denmark is sending in police, the army, and the local national guard to kill all the animals living on all of those farms, which are mostly in the country’s northern regions.

In Denmark, infections beginning in July spread rapidly, to the point where 191 farms had reported cases as of Nov. 2. At first the country instituted a program of selective culling — killing all animals on farms where infections had cropped up and those within about 5 miles. These measures failed to slow the spread at all. Public health authorities were puzzled how in­fections were spreading to distant farms. Suspicion now falls on seagulls (and possibly crows) as carriers of SARS-CoV-2 virus — not that the birds become infected, but rather that they carry virus-laden material on their feet. (Seagulls have been known to range up to 150 miles.)

The Danish government’s decision to destroy an entire industry, and one that is material to the country’s economy, came after scientists at the State Serum Institute (equivalent to the US National Institutes of Health) wrote a report (link is to a Google translation). It warns of troubling mutations in one strain of the virus circulating on mink farms — and passed back to re-infect humans. Institute officials have turned over data to the WHO and the European Centre for Disease Prevention and Control, but no details have been publicly released.

Because of the changes that occur in the spike protein in several of the mink variants of the virus, there is a risk that vaccines targeting the spike protein will not provide optimal protection against the new viruses, occurring in mink, and the immunity from past Covid-19 infection may provide less protection against the new virus variants. [Google translation]

Reuters quoted the Institute’s director: “The worst case scenario is a new pandemic, starting all over again out of Denmark.”

The mutant strain has been found so far in five mink farms and twelve people. The health minister has estimated that half of the human Covid-19 cases identified in northern Denmark (783 in number) are “related” to mink; and the State Serum Institute believes that up to 5% of those cases may involve the mutant strain.

In The Netherlands, Covid-19 on mink farms has led the country to advance its deadline for eliminating the industry, moving it up from 2024 to the end of this year. There and in Spain, officials voiced the worry that mink could become a reservoir for SARS-CoV-2, sheltering the virus against human vaccine, mutating it, and then passing it back to us.

Here is some of the coverage on this rapidly developing story.

[ Note added 2020-11-10: ] The Danish government has retreated from plans to cull all of the mink on farms in that country. The government decided that it did not have the authority to issue such a sweeping order, and an attempt to get a legislative fix failed. Mink farmers, some of whom had already culled tens of thousands of animals, were furious, and the government’s opposition pressed their advantage in the explosive political atmosphere. [ Note added 2020-11-10: ] Researchers in the Netherlands have in effect contact traced mink farm outbreaks in that country among both animals and humans, using genetic sequencing of viruses recovered from both species. The good news is that “the virus doesn’t seem to have accumulated any mutations that clearly help it adapt to [minks].” In other words the mutations observed are closer to random than to being driven by natural selection. Here is the paper in Science.