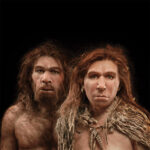 We’re going to be stringing together Covid-19 and the immune system’s response to it with genes we inherited from Neanderthals. Bear with us.

First, let’s look at a paper outlining a genetic defect that results in sub-par pro­duc­tion of one type of interferon, which is a critical component of the immune system’s first line of defense. It’s one of a pair of papers in Science that came out last week implicating inter­feron failures in some of the more dire outcomes of Covid-19 disease. Here’s the second paper — it describes patients with an auto-immune condition in which anti-antibodies circulating in their blood deactivate the interferon they need to respond to pathogens.

Derek Lowe wrote a detailed piece about the second paper and its implications for treatment of Covid-19: The pre­sence of anti-antibodies could be used as a marker to guide what type of treatment might work, and what would not (for example, administering alpha-interferon would be futile). And also to exclude such people, should they survive Covid-19, from donating convalescent plasma.

Here is a popular account in Science News tying together the two interferon results.

Today a paper went live in the journal Nature tying a genetic risk factor for severe Covid-19 to genes that humans ac­quired from Neanderthals tens of thousands of years ago. (An author of this paper, Svante Pääbo, was the one who first decoded Neanderthal DNA.) That link will get you only the abstract; here is an Associated Press piece outlining some of the results.

It’s now commonly accepted that humans interbred both with Neanderthals and with a related human species, the Denisovans, between 55,000 and 45,000 years ago in Europe and Asia, and that those mixings conferred new disease-fighting abilities on humans. (Neanderthal genes still extant in the modern human genome have also been associated with the color of skin and hair and with fat metabolism, and Denisovan genes seem to help humans adapt to life at high altitudes.)

About 16% of Europeans and half the population of South Asia carry the Neanderthal-derived genetic haplotype that predisposes to severe Covid-19. The authors of the Nature paper note that the haplotype’s prevalence is highest in Bangladesh, at 63%, and cite research indicating that the Covid-19 death rate for Bangladeshis is about twice that for the population as a whole.

Being unable to access the Nature paper, I couldn’t determine whether this Neanderthal contribution to our genome overlaps that involving the interferon defect described in the first linked paper above.

Bonus fact: The Denisovans are named for Denisova cave in the Altai mountains of Siberia, where the first bones from the species were found in 2010. The cave in turn is named for an Old Believer hermit who lived there in the 18th cen­tury. His name was Dyonisiy (i.e., Denis).