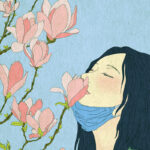 Four items of recent pandemic news: Pfizer applies for full FDA approval; Moderna’s booster testing; the CDC’s optimistic report; and what it means that the US is open to waiving vaccine patent rights. Plus news briefs and a frippery.

By now you have probably heard that the Biden administration, in a reversal of policy, is open to waiving patent rights for vaccines during the emergency. The hope is that this will speed up the process of getting the world vaccinated.

Here are quotes from two bloggers that sum up why I don’t think loosening intellectual property rights will help. Pharma industry research chemist Derek Lowe: “The supply of vaccines has been increasing, and would continue to increase without the patent waiver idea. The constraints are physical ones, supply chains and engineering ones, not legal.” Economics professor Alex Tabarrok: “The US trade representative’s announcement is virtue signaling to the anti-market left and will do little to nothing to increase supply.”

First of all, nothing will happen quickly. What the US is willing to do is negotiate over text at the World Trade Organization, which next meets in June. Of the WTO’s 160-odd members, over 100 low- and middle-income countries are generally in favor of temporarily suspending IP rights on vaccines. But besides the US, opposition to any easing of IP rights has included the UK, Japan, Switzerland, and the EU, besides the entire pharma in­dus­try. It is hard to imagine that a WTO vote on the matter could take place before 2022.

And there isn’t much evidence that patents are now standing in the way of manufacturing outside of vaccine makers’ countries. Patent licenses are freely available, and have been granted by AstraZeneca, Novavax, Sino­pharm, and others. Moderna said last October that it would not enforce patents on its vaccine.

The pharma industry argues that the real obstacles to wider manufacturing of existing and developing vaccines are raw materials, supply chains, technology transfer, and manufacturing capacity and expertise in the countries that would like to be less dependent on the first world for biomedical products. Read Derek Lowe for the chapter and verse on this, and links to further expertise on the subject.

Here are news and analysis from Stat News, and coverage from CIDRAP and Ars Technica. 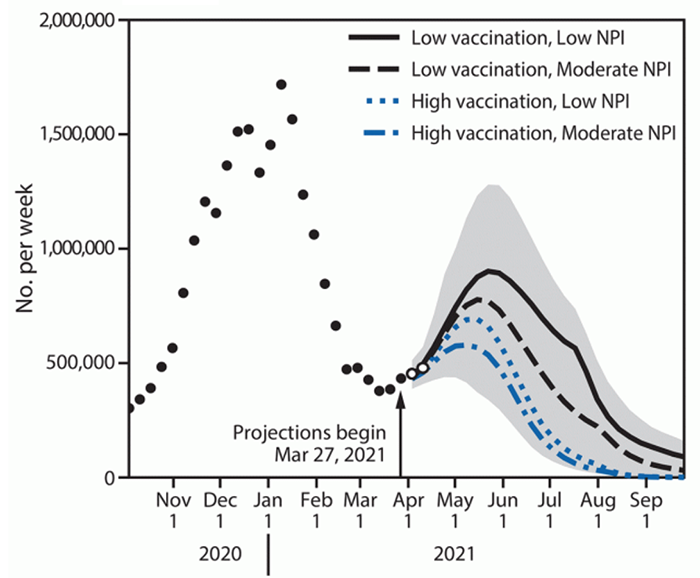 But the country could see an uptick in Covid-19 in May due to the circ­u­la­tion of viral variants. Those are the conclusions of modeling de­scribed in the CDC’s Morbidity and Mortality Weekly Report.

Researchers modeled four scenarios, featuring combinations of high and low uptake of vaccines and adherence to non-pharmaceutical interventions (NPIs, such as masking and distancing). All the scenarios show a rise in new cases, hospitalizations, and deaths in May to early June, followed by a steep drop-off of all indicators by July. The illustration depicts the projections for new cases; click for a larger version.

The CDC director, Rochelle Walensky, said of the report: “The results remind us that we have the path out of this, and models, once projecting really grim news, now offer reasons to be quite hopeful for what the summer may bring.”

Here is coverage in the Washington Post and CNBC.

In a press release, Moderna announced preliminary results of its booster trial (we had mentioned the trial’s in­iti­a­tion last January).

The trial was split into three arms: three strategies for boosting neutralizing titers in previously vaccinated par­ti­ci­pants, with boosters administered 6 to 8 months after volunteers had their series of two shots of the vaccine. One arm used a half dose (50 μg) of Moderna’s original vaccine as a booster. Another arm boosted with a new version of the vaccine tuned for the B.1.351 (South African) variant. The third arm used a “multivalent” form­u­la­tion — a mix of original and B.1.351 vaccines.

The upshot: the first two produced robust immune responses, including increased levels of neutralizing anti­bodies that were effective against both B.1.351 and P.1 (from Brazil). The B.1.351-targeted arm resulted in higher antibody titers — the press release does not say how much higher. Results from the multivalent arm were not yet available.

Here is reporting from the Boston Globe, CNBC, and Barron’s.

The makers of the vaccine that was first to get an EUA from federal regulators have begun a rolling process of submitting a biologic license application to the FDA. The agency could decide on the application within a couple of months, though by the rules they have 6 months from time of application.

The BLA requires 6 months’ worth of safety data (the EUA needed 2 months), documentation of manufacturing processes and facilities, and demonstration that the vaccine can be produced consistently and reliably.

The application is for use in people 16 years of age and older. You will recall that a few days back the companies applied to have their existing EUA extended downward to cover those 12-15 years old.

Once a vaccine is approved its maker can market it directly to doctors and pharmacies; the government no longer needs to be involved in distribution. Also, organizations — schools, businesses, entertainment venues — can require vaccination with an approved vaccine, something that is not allowed under an EUA.

It is possible that full approval for this vaccine (and Moderna has said it will follow the same path by month’s end) could ease the misgivings of some who are in “wait and see” mode on the question of Covid-19 vaccination, moving the country closer to herd immunity.

Today’s frippery is a collection of 17 evocative New Yorker-style cover illustrations of what emergence from the pandemic might look like. They were solicited from third-year students at the School of Visual Arts by an instructor there, Tomer Hanuka.

The illustrations as submitted, and as shown in Hanuka’s Twitter feed linked above, all featured the New Yorker banner in its distinctive typeface. On the SVA website, however, each illustration is headed “Old New World” in the same typeface. I wonder whether the New Yorker’s lawyers reached out and gently suggested that the school not participate in promulgating copyright violation.

Below are all 17 covers in thumbnail form. Click any image to open a larger version in a new window. I have out­lined my personal favorites in red; let me know yours in the comments.

If you want to see more of these young artists’ work, start from the SVA link above; each piece links to a page with an onward link to their Instagram or other online home. 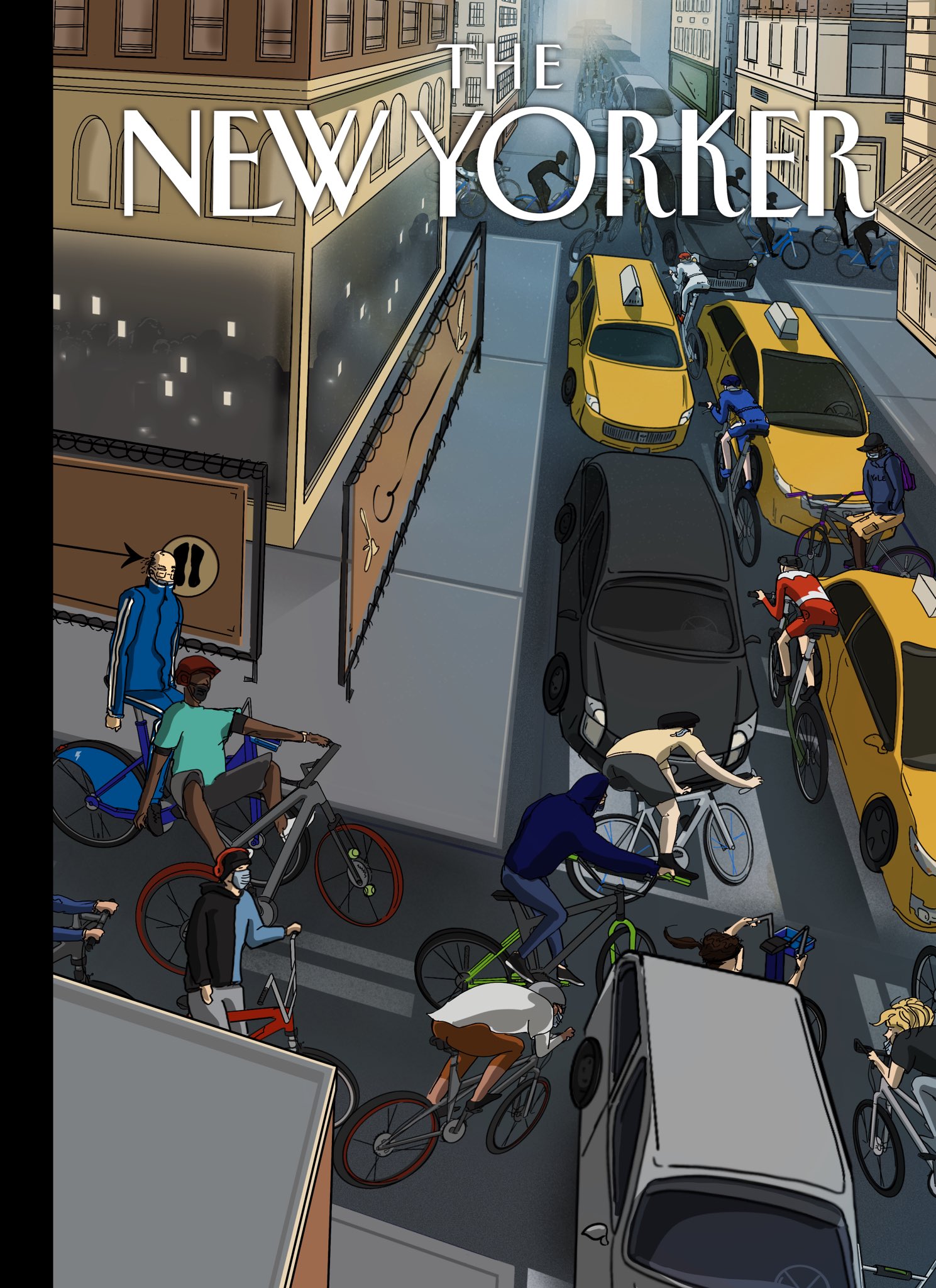 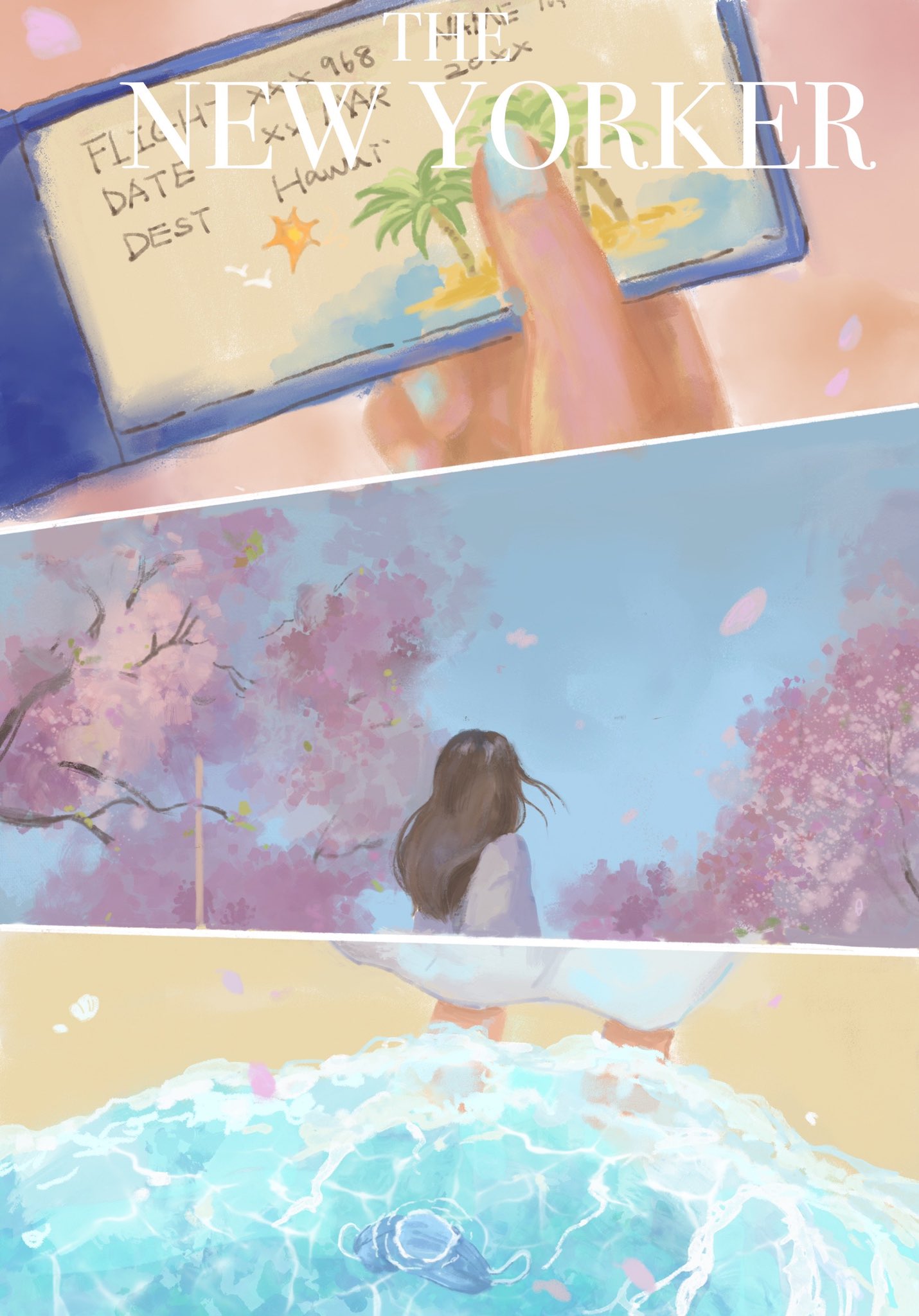 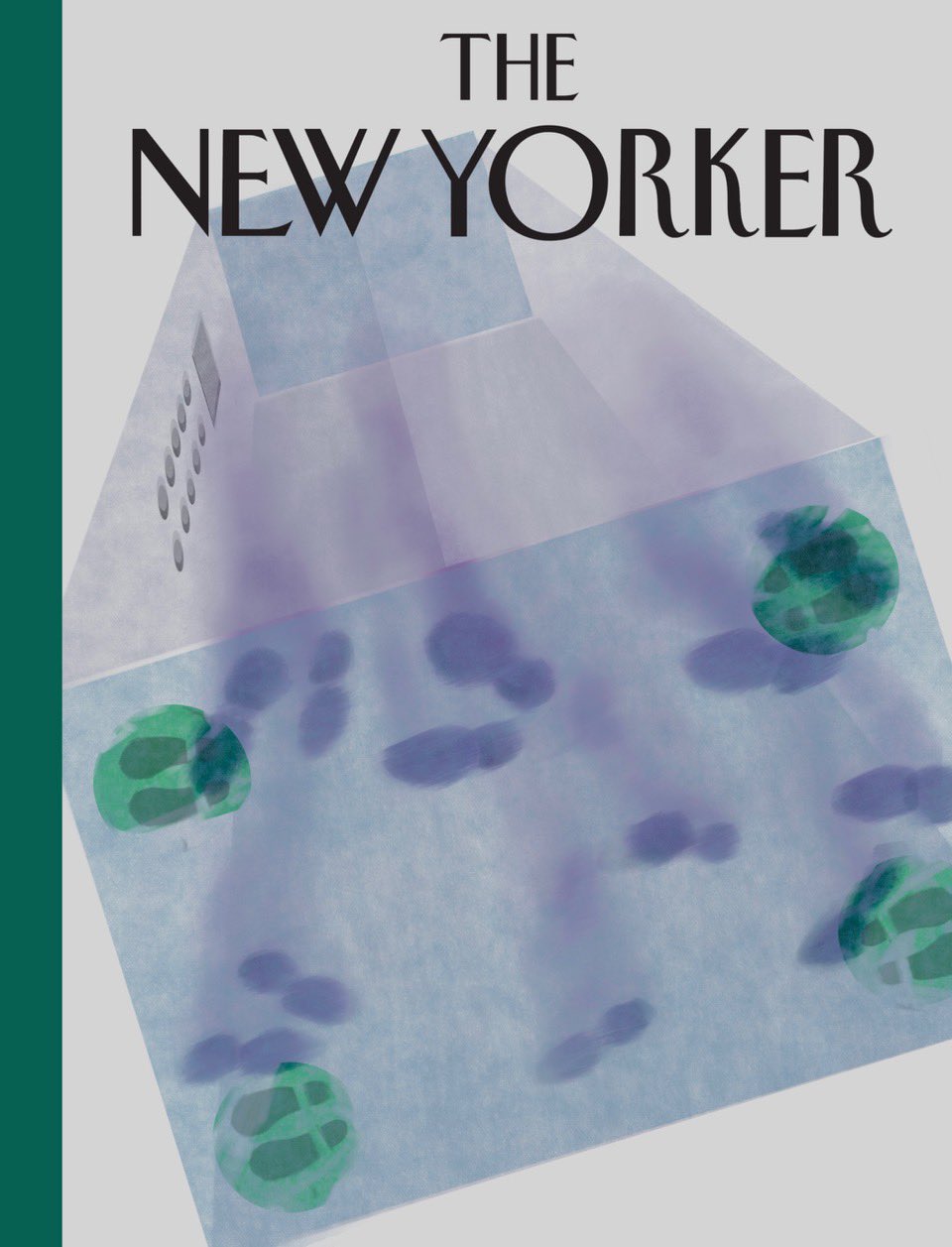 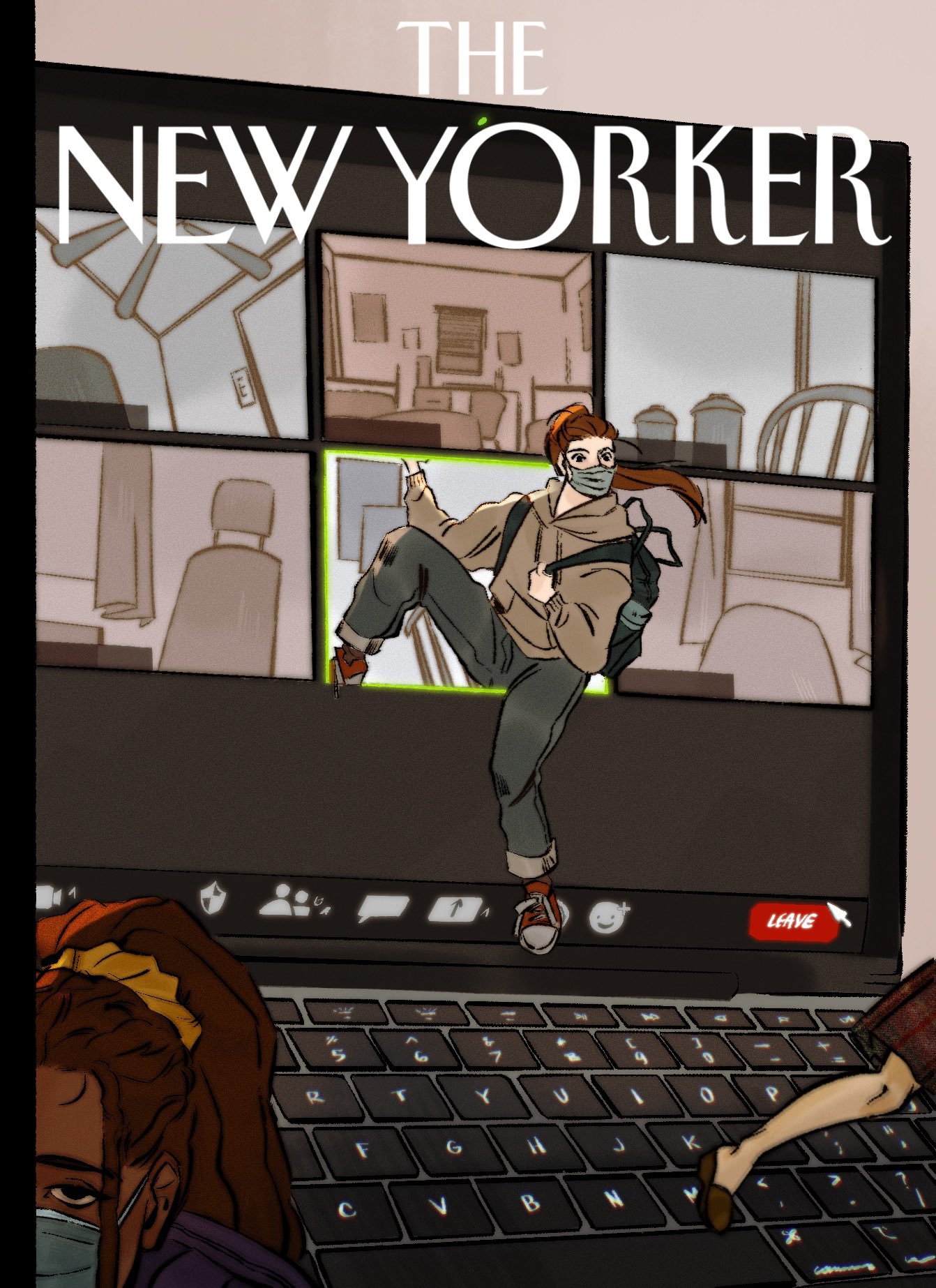 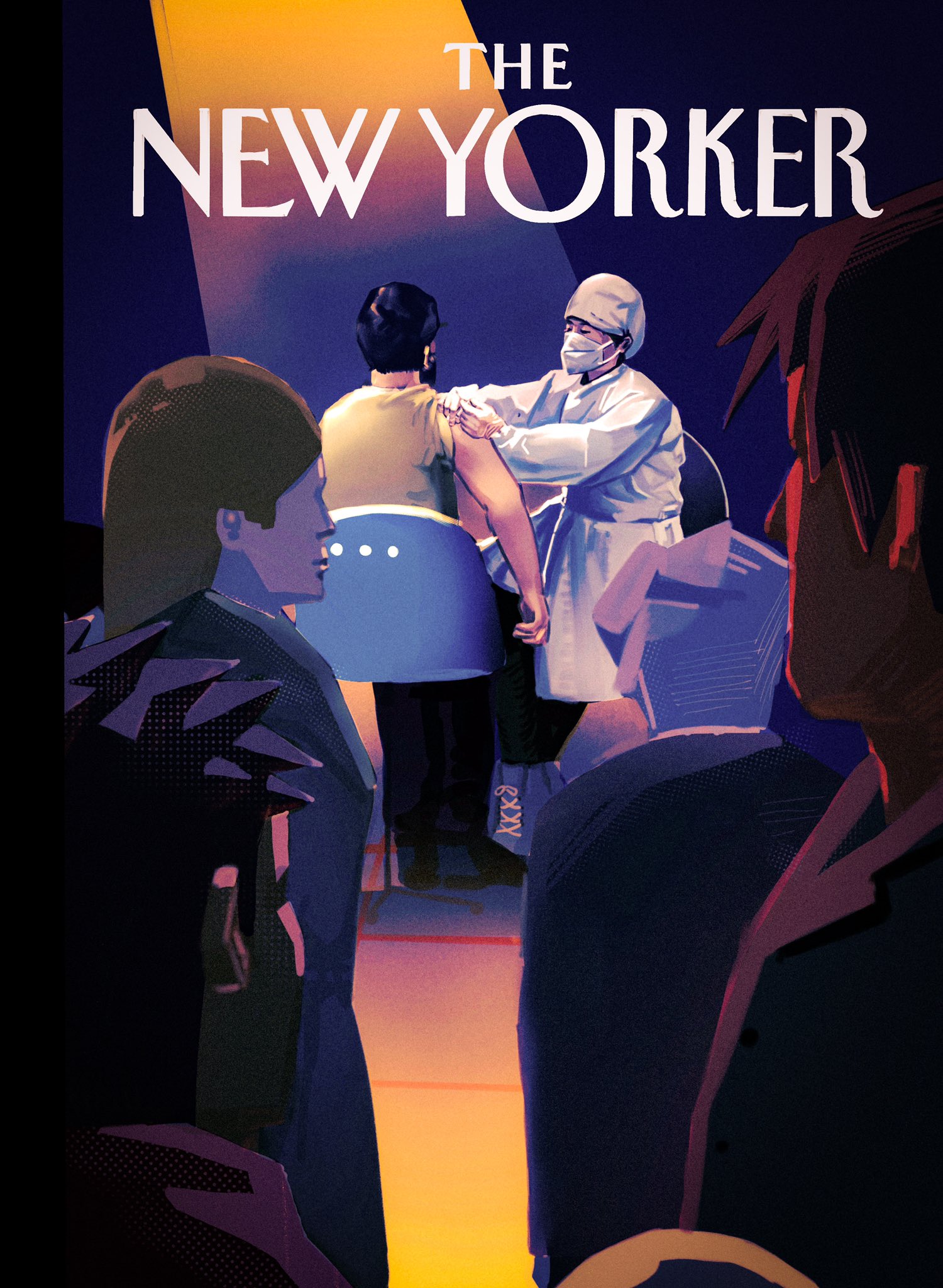 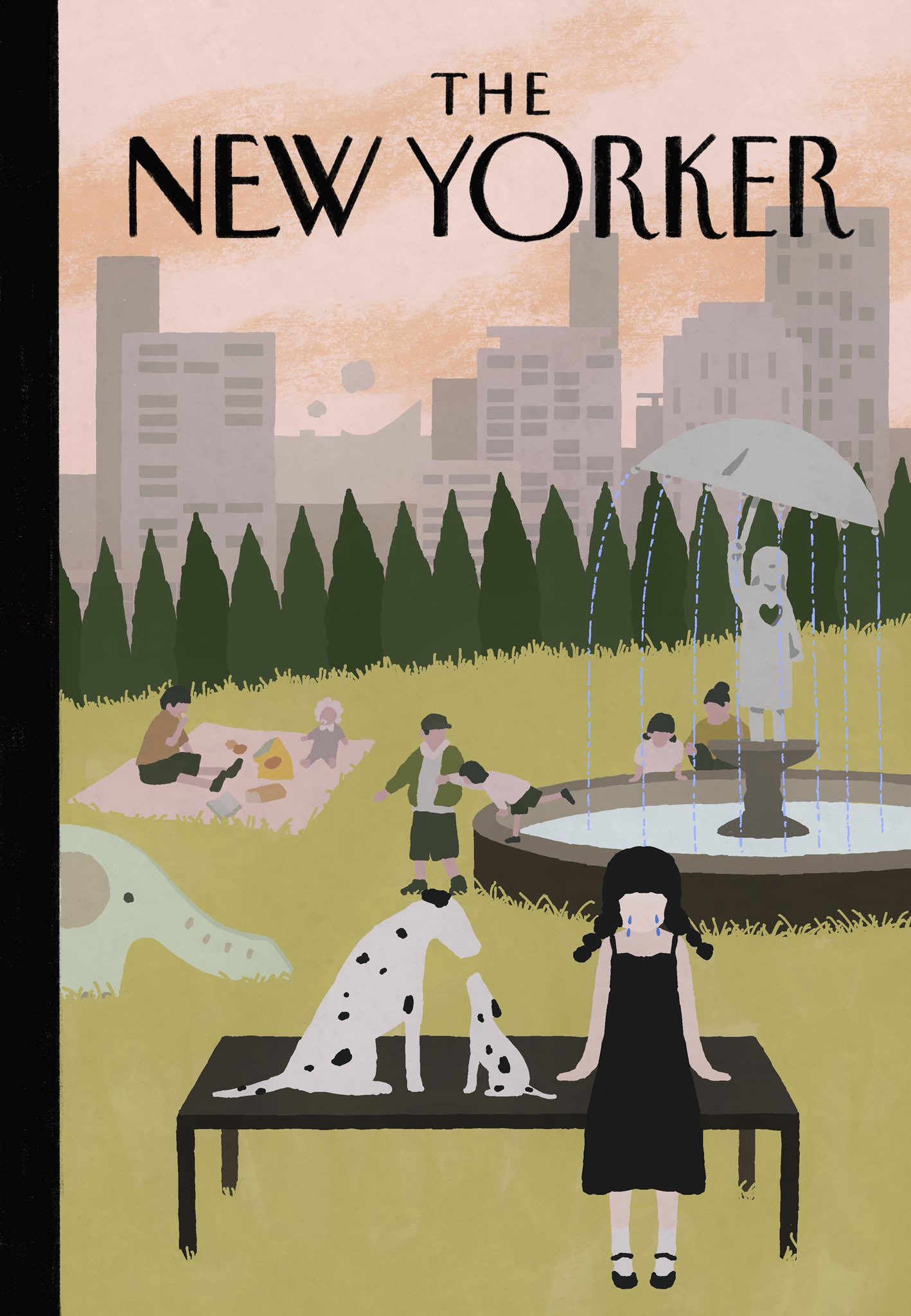 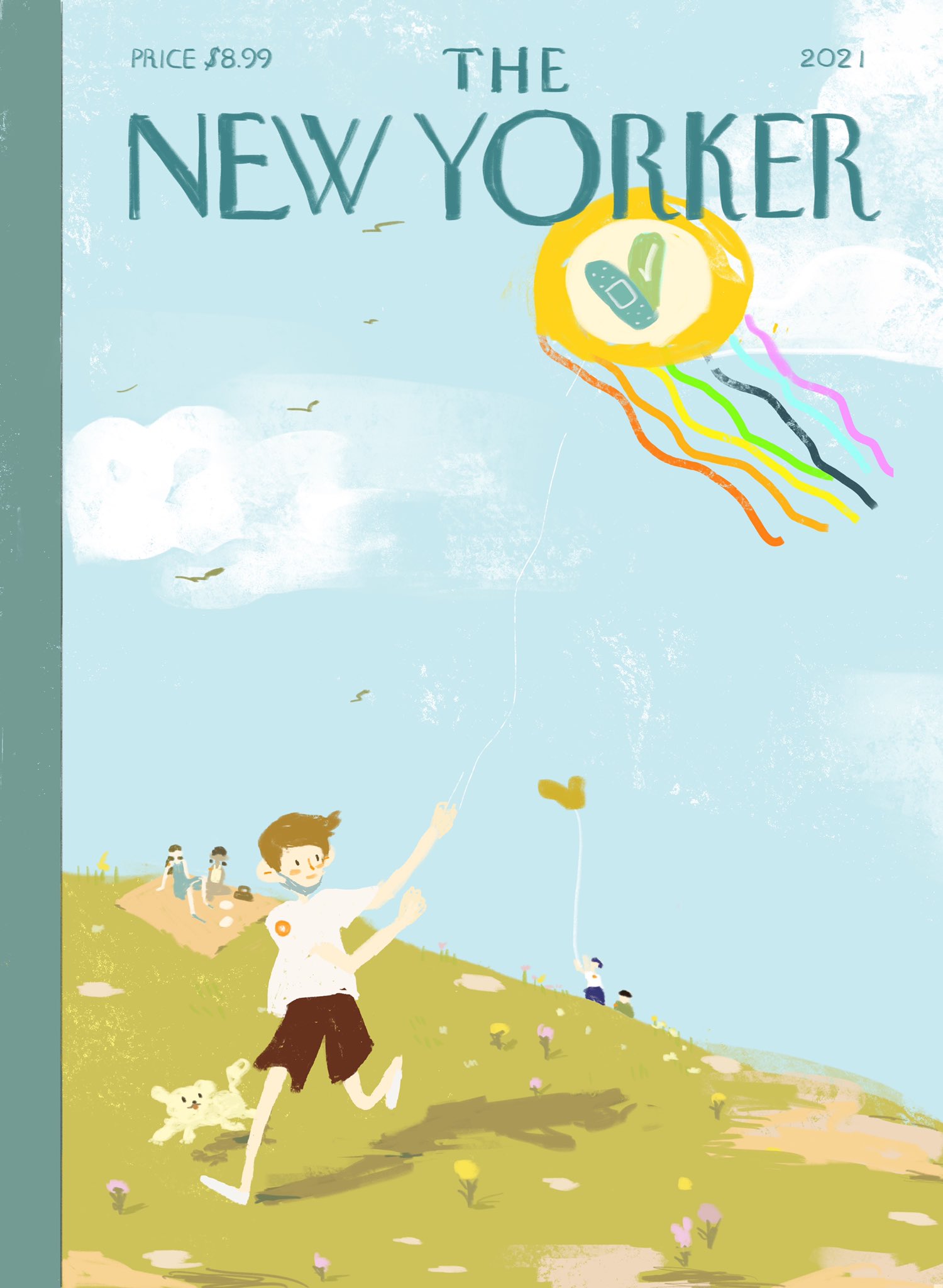 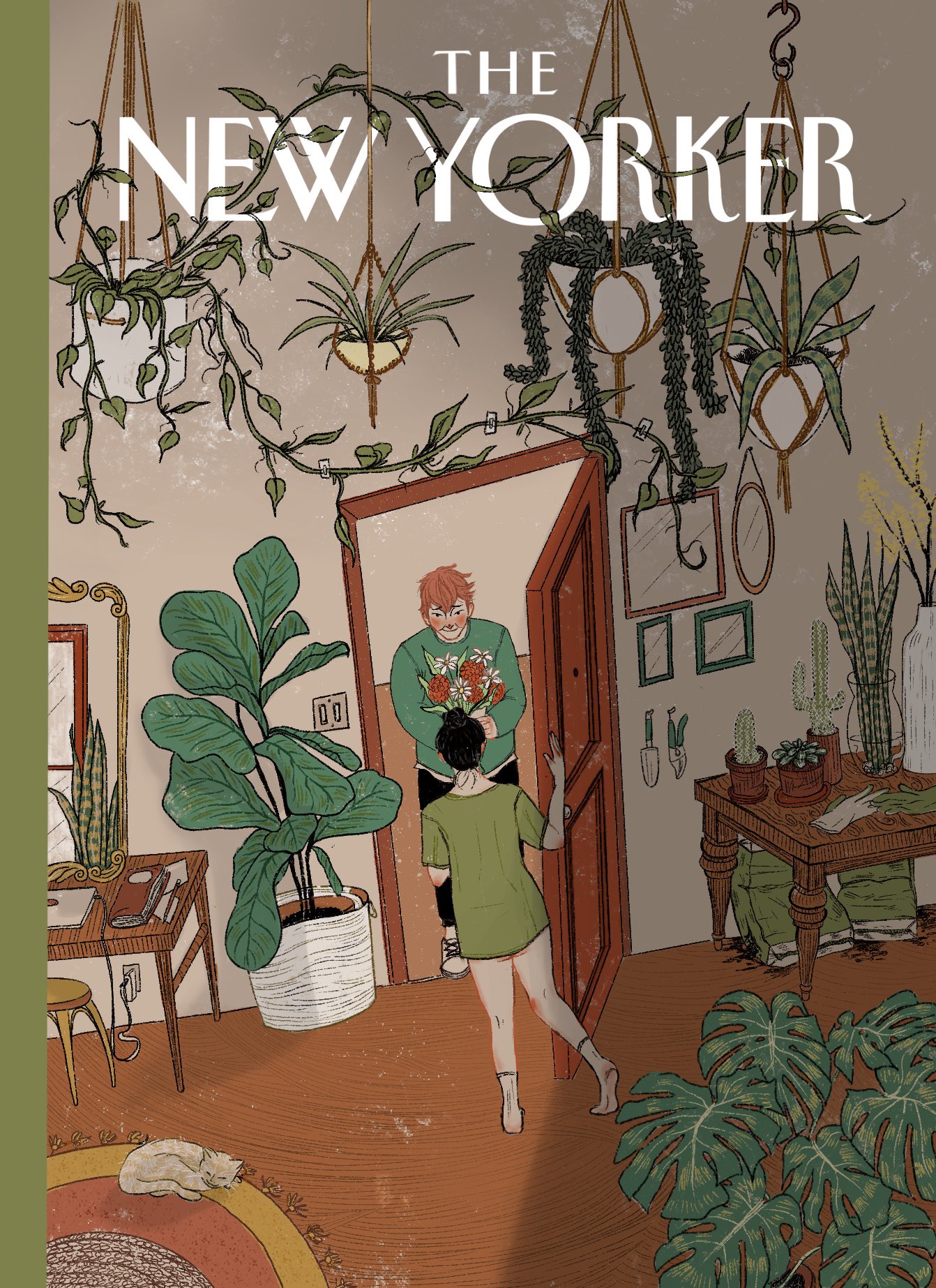 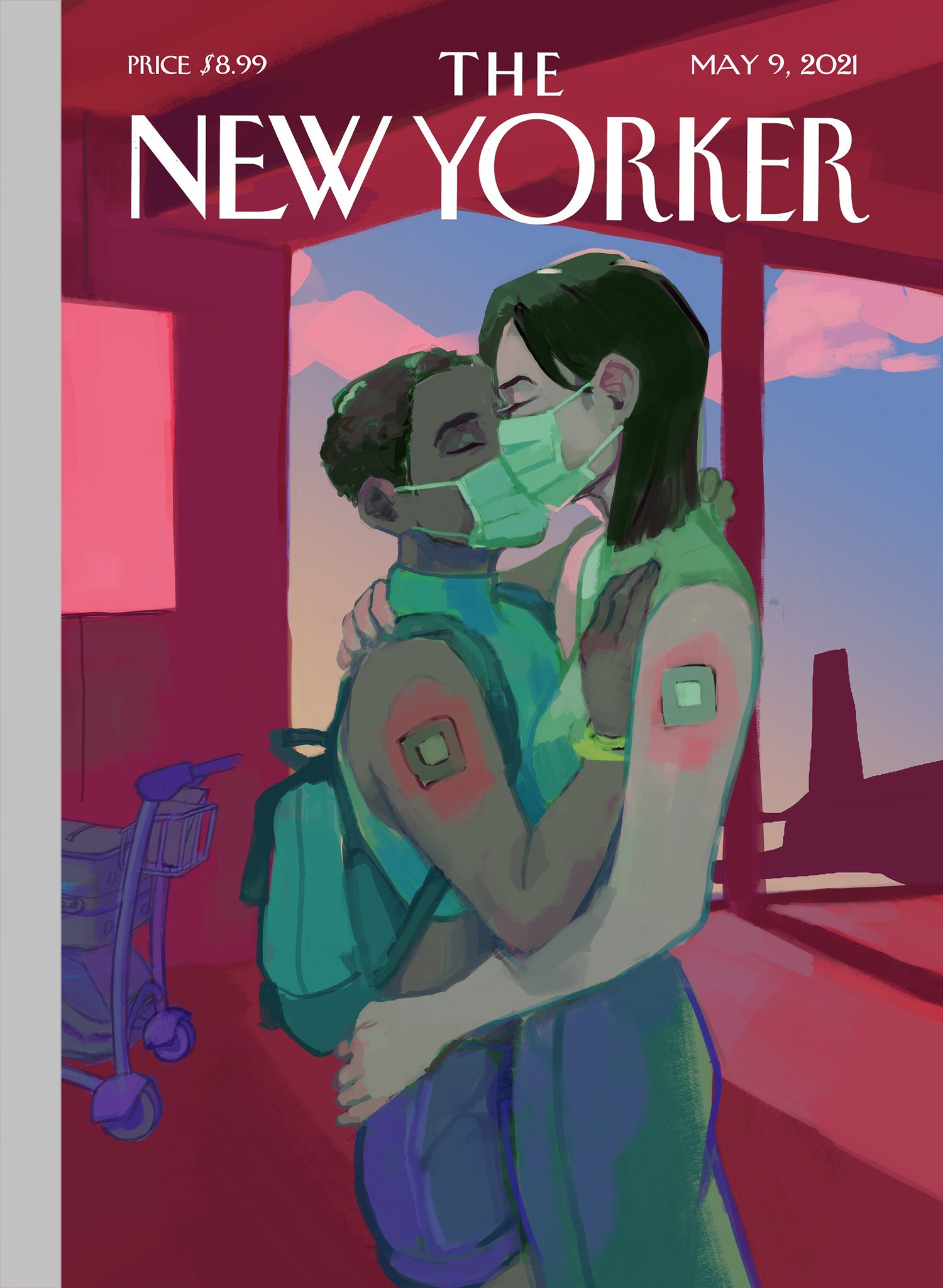 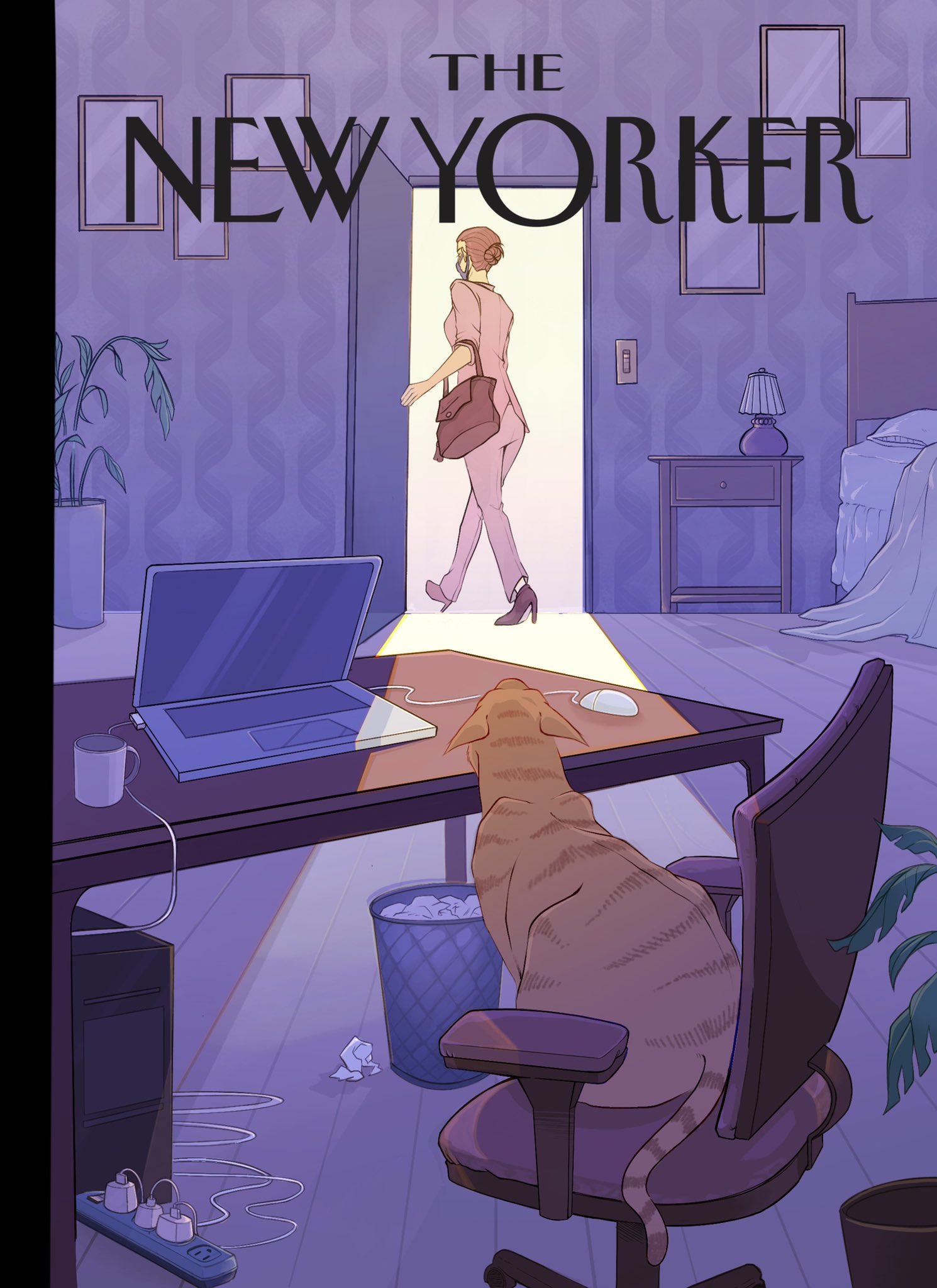 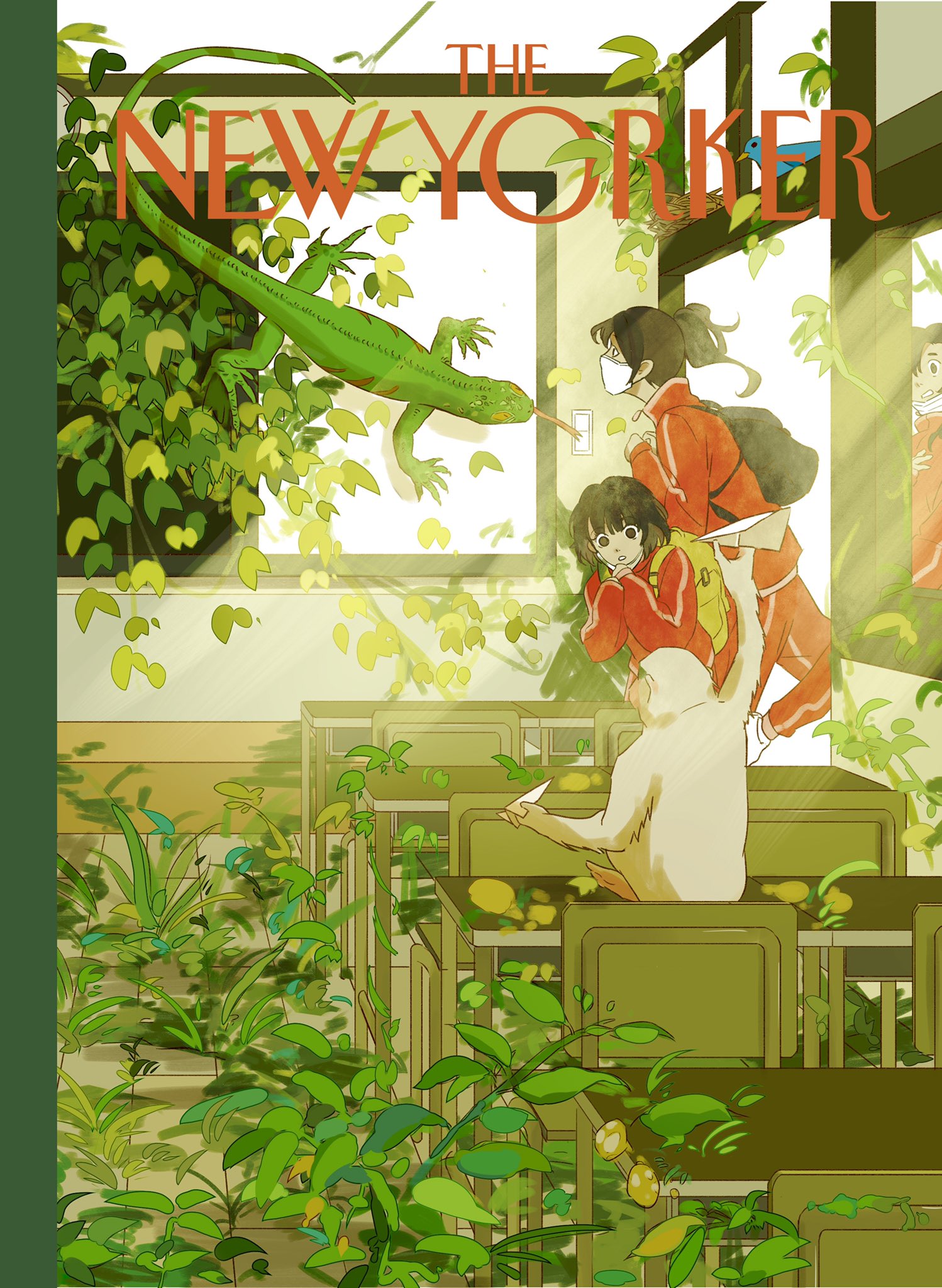 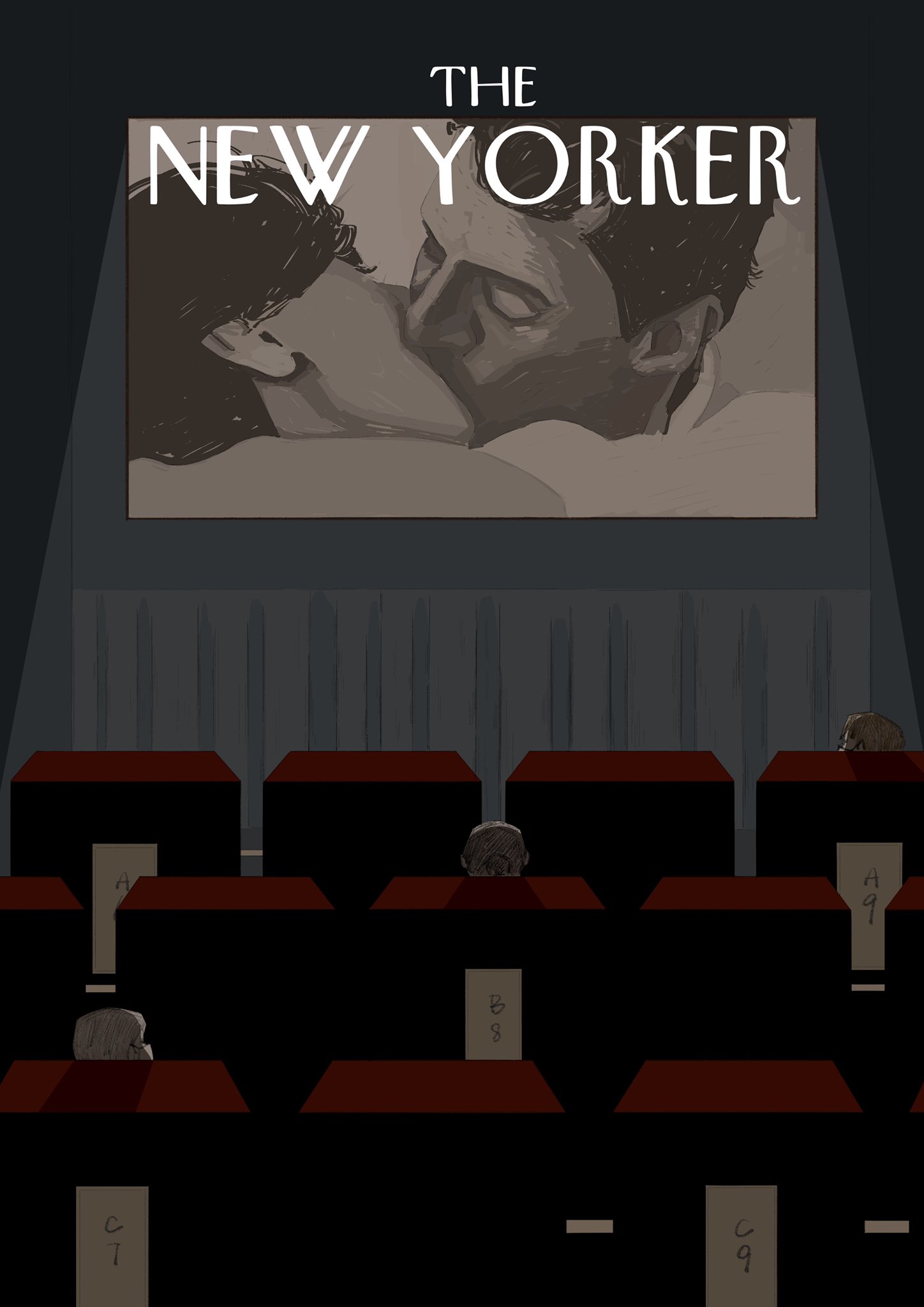 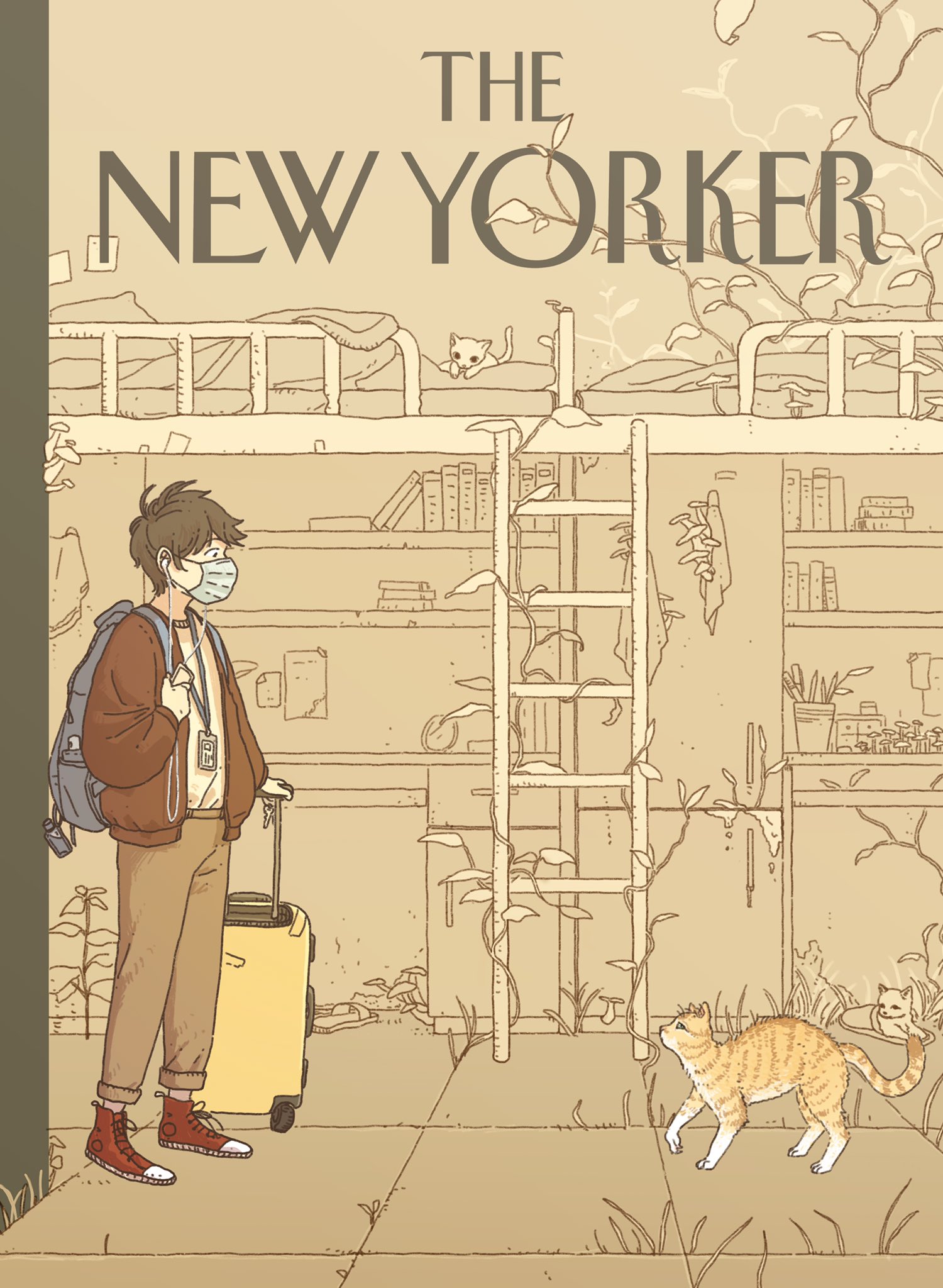 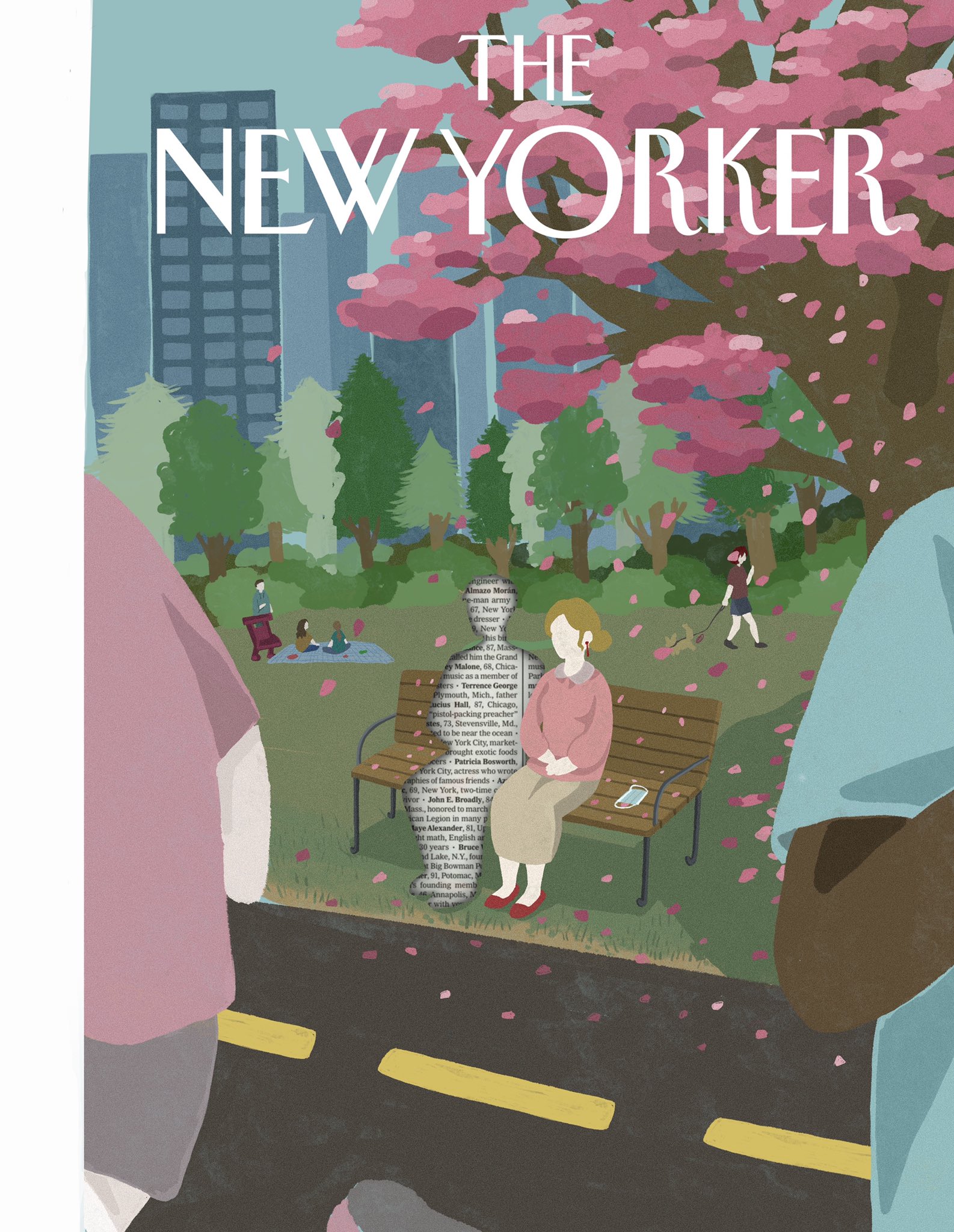 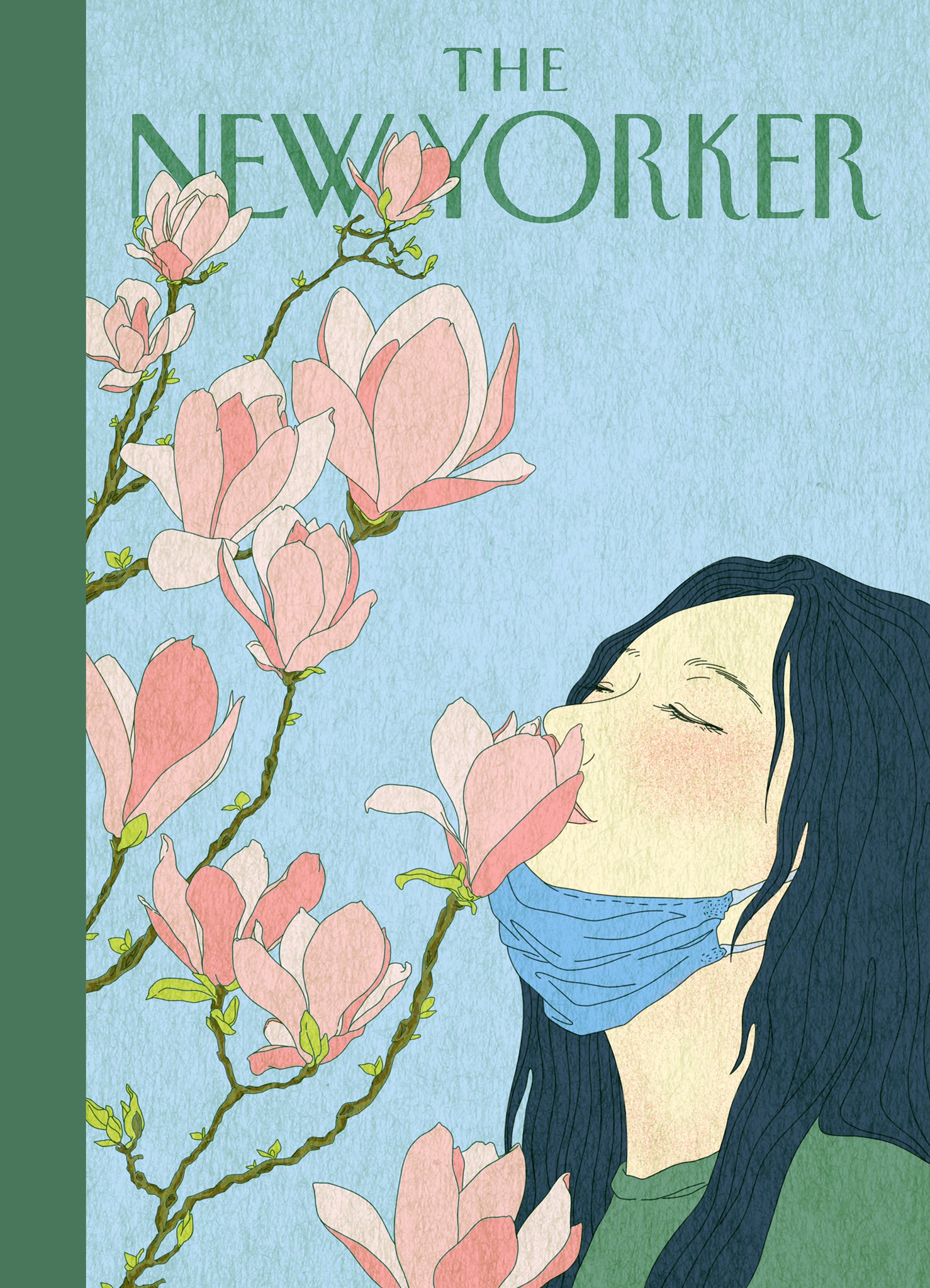 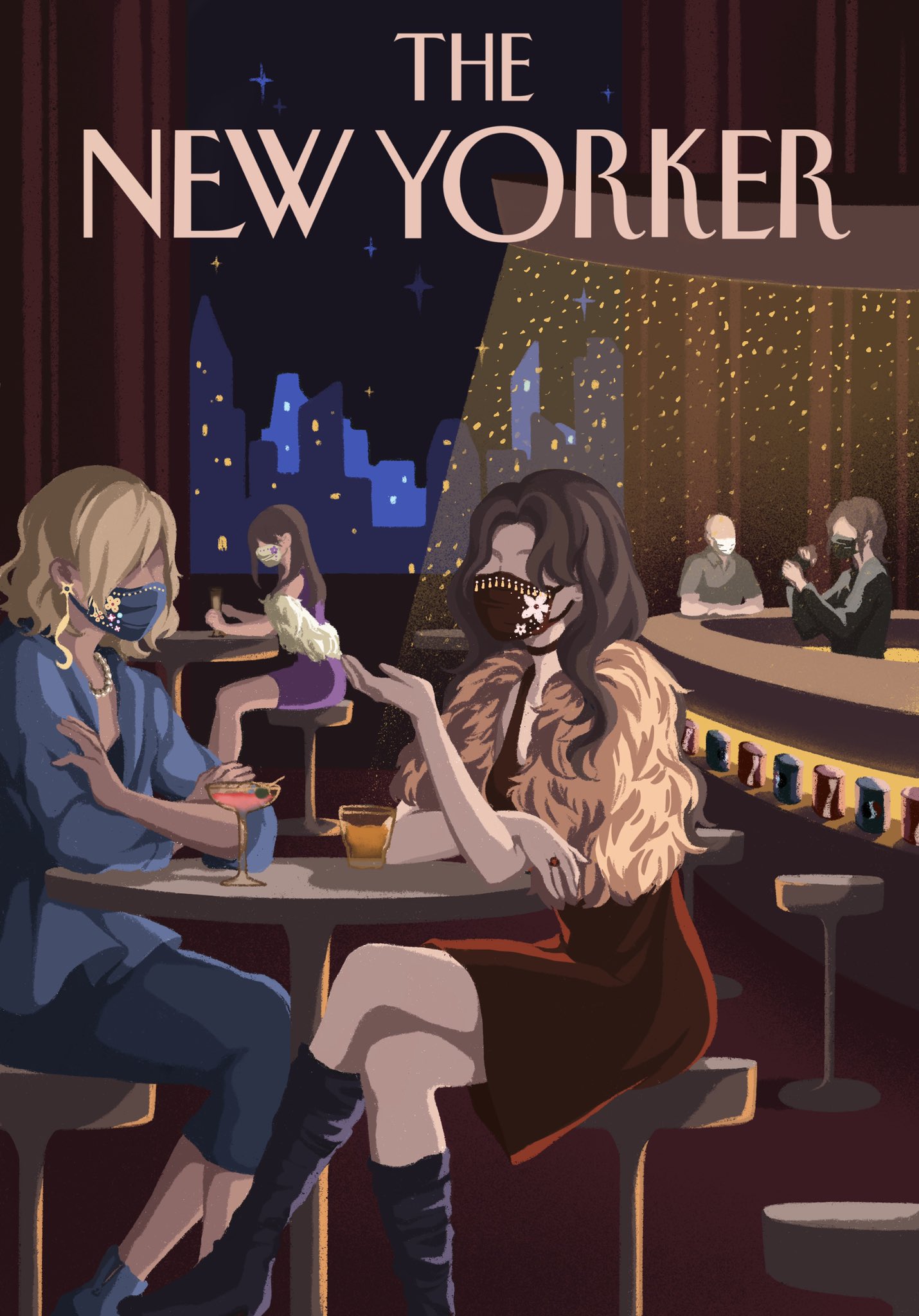 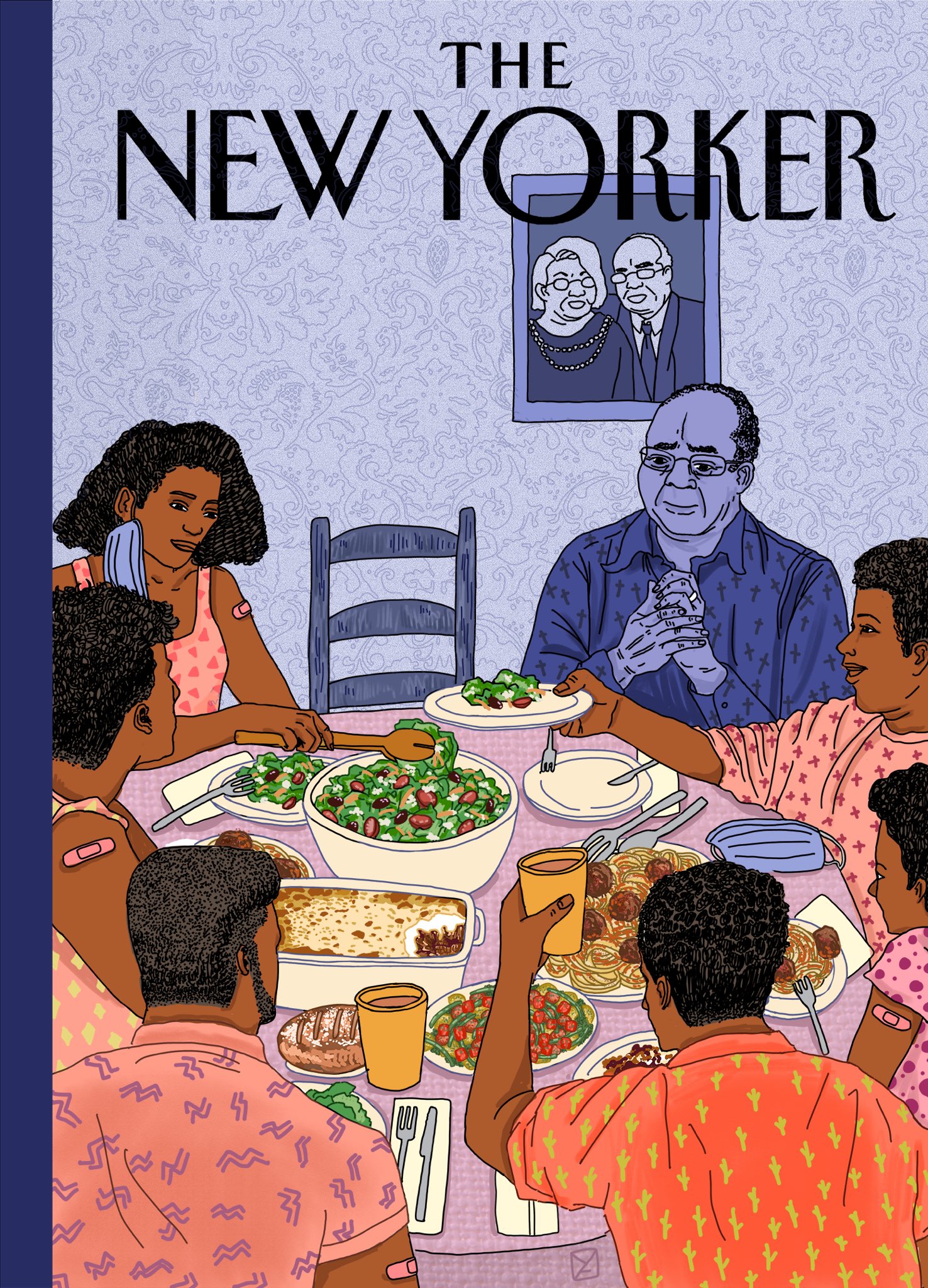