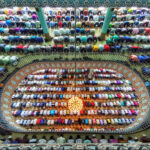 Herewith three items of pandemic news you may have missed recently: A trial of mixed shots begins in the UK; a sobering tale of a variant’s spread; and J&J applies for an EUA. Plus news briefs and a frippery.

Johnson & Johnson applies for an EUA

Yesterday J&J filed its paperwork to begin the process of getting an FDA emergency use authorization for its candidate vaccine. The company released top-line results from its Phase III study last week.

Later on Thursday the FDA announced the schedule for a meeting of its outside committee of advisors to consider the submission. That meeting will happen on February 26. (I would have thought the situation called for a bit more urgency than a 3-week delay.)

If the FDA gives the nod, as expected, the first shots of the US’s third authorized vaccine could go into arms early in March. But initial supplies will be tight. While the company’s contract with the US government calls for 12 million doses to be ready by the end of February, J&J has encountered manufacturing glitches and may not have more than single-digit millions of shots ready at authorization.

Experts fall on a spectrum between worried and alarmed at the prospect of any and all of the fast-spreading SARS-CoV-2 variants taking hold in the US. The CDC has warned that unless strong measures are taken, the B.1.1.7 variant (first seen in the UK) may become dominant in the US by March.

In a region of Ontario north of Toronto, we may be seeing a preview of what the pandemic could look like if variant B.1.1.7 takes hold here.

In the area around Barrie, Ontario, two nursing homes have seen fast-spreading outbreaks of Covid-19, and some of the cases have been confirmed to be the B.1.1.7 variant. In just three weeks since an outbreak was declared on January 8 at the Roberta Place nursing home, all but one of the 129 residents have contracted Covid-19; 61 have died. The entire outbreak is linked to a single case of international travel.

The CEO of a hospital helping to manage the Roberta Place outbreak said, “With this variant, we have always been working one or two steps behind the virus. It’s moving faster than we are right now.”

The region’s medical authorities are trying to do contact tracing related to the variant’s spread; they are “in talks with Public Health Ontario to lower the threshold of what is typically considered a high-risk contact” — some cases seem to have been picked up in retail stores in just a few minutes’ exposure.

Following confirmation of the variant in a nearby region, the district health unit has “shortened the exposure time to as little as a second if individuals were not wearing face masks” — vs. the 15 minutes of exposure in the prevailing contact guidelines.

The best account I found of the situation around Barrie is in the Globe and Mail, but unfortunately that outlet re­quires you to set up a free account before you can read anything. Here is a writeup in a local paper.

We noted in December that researchers in the UK planned to explore what happens when people get a booster shot of a different vaccine than the one they had gotten initially. That study is now signing up volunteers.

The trial will examine the responses of 820 subjects over age 50 to an initial dose of Pfizer vaccine followed by a booster of AstraZeneca’s, and vice versa. Some people will get the second shot four weeks later and some after an interval of 12 weeks.

The researchers hope to demonstrate that a mixed vaccination program produces no worse results than two shots of the same vaccine; a stretch goal would be to show that the mixed protocol actually provides even better protection. (Vaccines against hepatitis A and B from different manufacturers have proved interchangeable, and work is underway to see if the same is true of HPV vaccines.) If Covid-19 vaccines could be mixed and matched, with variable timing, that would be a huge advantage in a worldwide vaccination push amid scarce and uncertain supplies of vaccines.

The reward for your patience: today’s frippery is another photo contest, this one on the unlikely-for-2020 subject of travel photos. It turns out that some photographers did indeed travel last year. To my eye, among the standouts were photos from Svalbard, Norway and the Faroe Islands, where the photographers endured significant hardship and discomfort even to catch a break in the clouds.

The thumbnail at top left is from a photo by Azim Khan in Bangladesh. It shows thousands of people praying together at one of the largest mosques in the world. Click the thumbnail for a larger version, then hit Back to return.