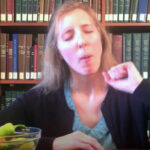 Herewith three items of pandemic news you may have missed recently: Llama antibodies redux; two new viral variants out of Ohio; and the function of that second shot of vaccine. Plus news briefs and a frippery.

What the second shot does

With all the talk of possibly skipping second shots or stretching out the interval between the first (“prime”) and second (“boost”) injections, I thought it would be useful to have a primer on how the immune system reacts to exposure to an antigen via a vaccine.

Pfizer’s Phase III testing and its EUA from the FDA specify a booster shot three weeks after the prime. Moderna’s call for four weeks between shots. What is the purpose of a second shot, and why those particular intervals?

In This Week in Virology episode 703, regular host and immunologist Brianne Barker spelled it out. Watch just over seven minutes beginning at 23:38 as host Rich Condit frames the questions and Barker answers in detail. Short form: the boost has qualitatively different effects in the immune system than the prime. Before you watch, or if you don’t have time to, I’ll outline it below.

When a B or T cell first sees its antigen — as when after a shot of mRNA vaccine it encounters the SARS-CoV-2 spike protein presented on the surface of a muscle cell — it makes what is called its “primary response.” It goes from being “naive” to running a program to improve its functioning. It proliferates and changes into an “effector” cell. These don’t persist. Memory cells remain, primarily in the lymph nodes and perhaps in the spleen. These are better able to respond when they see the antigen the next time, both quantitatively and qualitatively better.

The second shot, the boost, triggers a secondary response; memory cells improve each time they see the antigen. They become more effective memory cells, there are more of them, and they make better antibodies. In other words, they improve in affinity maturation, size of pool, and cells’ ability to respond.

As for boost timing, Barker cites a vaccine textbook by Watkins, which teaches that three weeks after the first shot, the primary response has waned enough that the boost is effective. In the current situation, we want to get people into the boosted state as quickly as possible, so that’s why Pfizer chose three weeks. As for the maximum interval, Barker says: “I have never seen a question of too long… eight or 12 weeks should be fine… There probably is a sweet spot… I would want to see the data on that.”

Given the above, one might reasonably ask whether Johnson & Johnson’s one-shot vaccine can possibly provide the level of protection a boosted one does. J&J has published data from its Phase I and II studies showing good levels of neutralizing antibodies. But as I mentioned on Tuesday, no one knows what the “correlates of protection” are for Covid-19: what level and what kind of immune response would signal that a person is safe from the disease. J&J’s single-shot Phase III should read out for efficacy by the end of this month; later on we will hear from their separate, two-shot trial.

Derek Lowe published a cogent analysis of the J&J Phase I and II results.

Virus researchers at Ohio State University announced the emergence of two new US-bred strains of the SARS-CoV-2 virus, similar in some mutations to the UK variant of concern, but featuring a combination of mutations not seen elsewhere. One of these is believed to have achieved dominance in the city of Columbus, Ohio among the variants spreading there, in a period of only three weeks. Like the UK and South Africa variants, this one is believed to spread more readily. The researchers say an account of their work will be forthcoming in preprint form. For now there is only this press release.

In August we looked at the development of antibodies from llamas as a prophylactic or treatment for SARS-CoV-2 infection. Virologist Vincent Racaniello has an update on this promising research direction in his blog at virology.ws. He links to a paper in Science in which researchers from the University of Bonn and elsewhere developed a multivalent (double-acting) antibody derived from camelid immune systems. The researchers challenged an alpaca and a llama with SARS-CoV-2 spike protein, then harvested and analyzed the antibodies the animals produced. Further re­fine­ment of these antibodies, including combining the “nanobodies” from two of them, resulted in a formulation that not only deactivated the spike protein, but proved robust against that protein’s efforts to mutate to evade the antibodies’ protective effect.

In today’s Update we kick off a section of news briefs: quick items that may embody some combination of recent, im­por­tant, and/or interesting.

As a reward for your patience today, the frippery is Hot Pepper History (pictured above). This YouTube series ran from 2016 to 2019, and in each of 47 episodes, a member of the Indiana Historical Society would eat a hot pepper and then attempt to deliver a short lesson on state history. Some examples are the origin of the term “Hoosier” and the squirrel mi­gra­tion of 1911. Please enjoy, and be sure you have plenty of dairy products at the ready.