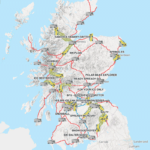 Herewith three items of pandemic news you may have missed recently: A wild mink in Utah has turned up infected; and two possibilities for finding that we may have more vaccine than we thought we did. Plus two fripperies.

Zeynep Tufecki and Michael Mina have an op-ed in today’s NY Times arguing that both Pfizer and Moderna should immediately mount trials to determine how much protection a single dose of their vaccines confers.

Both Phase III trials were designed around a two-shot regimen. Yet the data provided to the FDA for both vaccines suggests that significant protection already exists 10 to 14 days following the first shot. Pfizer’s data indicates an efficacy after the first shot of 92%, and that the protection lasts at least four months. This early effect is visible in Pfizer’s very telling figure reproduced here. What is not known is how long this protection lasts or how it fades with time. The belief is that a second (booster) shot will extend the period of immunity; but this is merely an assumption at this point.

If new trials with young, healthy volunteers could determine, in a matter of a few weeks or months, that a single shot is efficacious, then the nation (and the world) would suddenly find that it has twice as much vaccine as it thought it did. The authors write:

There is no rule that says that vaccines must be boosted within weeks of each other. For measles, the booster dose is given years after the first dose. If the [Covid-19] booster dose could be given six months or a year after the first dose, while maintaining high efficacy before the second dose, that would allow twice as many people to get vaccinated between now and later next year, accelerating herd immunity…

Pfizer’s vaccine is packed and shipped in 5-dose vials. But workers at some of the first sites charged with putting shots into people’s arms discovered that the vials often contained more vaccine than that — enough for six shots, or even seven. These distribution sites got in touch with both Pfizer and the FDA, asking for guidance on whether it would be allowed to put this surplus to use in people awaiting vaccination. In the first day or two, the messages they got back were confusing or even conflicting, and they (reluctantly) dis­carded the extra vaccine. By Wednesday evening the confusion had cleared up, and the FDA now says that it’s OK to use that surplus — just not to combine several vials’ worth to make up a dose.

A Pfizer spokesperson told Politico: “The amount of vaccine remaining in the multi-dose vial after removal of 5 doses can vary, depending on the type of needles and syringes used.” A pharmacy expert told the outlet: “Manufacturers typically overfill vaccine vials to safeguard against spills and other waste.”

So it looks like the country can count on more doses of Pfizer’s vaccine, by 20% to as much as 40%, than had been assumed.

We have been following the saga of Denmark’s mink farms and the Covid-19 infections simmering there. We noted in passing that outbreaks had been observed on mink farms in the US, the Netherlands, and other countries. Now comes a report of an infected wild mink that was captured near a mink farm in Utah. Re­searchers sequenced the virus genome from the infected animal and found it to be indistinguishable from the strain that had earlier been seen among the captive animals. There is no evidence of any other infections in the wild.

Here is the ProMed alert from the International Society for Infectious Diseases that first reported this worrying development. At the bottom are links to 52 other ProMed reports dating back to last April 27 on the interactions among mink, humans, and SARS-CoV-2.

Today we have two fripperies for your amusement. You have perhaps heard that Scotland bestows fanciful names on its snow plows (they call them “gritters”) — examples include For Your Ice Only and Spready Mercury. Now Minneapolis has decided to follow suit, and the highway department has opened a contest for Minnesota residents to suggest their favorite names. I have entered — and no I won’t be revealing what name I suggested. Here’s hoping it all turns out better than the Boaty McBoatface debacle.

For our second frippery, the folks at Google’s Arts & Culture project have lent their AI expertise to enable you to compose and record an operatic song for four voices. Trigger warning: the voices are represented by colored blobs, and some may find the sight, er, esthetically disturbing. Google calls it Blob Opera.