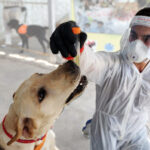 Herewith three items of pandemic news you may have missed recently: Zombie mink; dogs sniffing for Covid; and the mounting complications of AstraZeneca’s Phase III trials. Plus the usual frippery.

What a difference four days makes. After AstraZeneca announced on Monday what sounded like promising results from an interim look at data from two of their Phase III studies, questions immediately began arising.

It turned out that the fraction of study participants for which the company calculated a 90% efficacy for their vaccine candidate had mistakenly received a wrong dose — getting only half the desired dose in the first shot, then the full dose in the booster a month later. The company did not announce that wrinkle in their press release, instead letting some investors know about it before telling the general public. Those participants were not randomized; in fact all of them were below age 55. And there were only 2,741 of them, not a number to inspire confidence: chances are nonzero that the apparent 90% efficacy could have been a statistical chimera. Some critics raised questions about the validity of combing data from separate studies — in the UK and Brazil — run using different protocols. For example half of the Brazilian subjects received a saline placebo, whereas the British who did not get the ChAdOx shot received instead a placebo of a separate meningococcal vaccine.

The US arm of the Phase III study, which was not involved in Monday’s announcement, had been paused for nearly two months before resuming. That study reportedly has recruited only about 11,000 participants out of its desired total of 40,000. In theory this trial could be modified with a new “arm” to test out more deliberately the accidental but promising half/full dose regimen; but yesterday AstraZeneca’s CEO suggested that a whole new international trial might be spun up instead to test the dosing.

In other words, AstraZeneca’s Phase III situation is a mess. It contrasts most unfavorably with the clean and trans­parent way that both Pfizer and Moderna have conducted their trials. One would have to assume that Astra­Zeneca’s vaccine candidate would have no chance of winning authorization or approval from the US FDA based on current data.

And today the news broke that Britain may be days away from authorizing both Pfizer’s mRNA candidate and Oxford / AstraZeneca’s adenovirus-vectored one. The UK could steal a march on the US approval process, whose next step isn’t scheduled until December 10th.

Research groups around the world are working to prove whether or not dogs can be trained to distinguish by smell between a human with a SARS-CoV-2 infection and one without. There is tantalizing if not yet convincing evidence that it is so. Some trained dogs have shown accuracy far above chance in making the distinction. But it is proving difficult to put the training and testing into a rigorous form and them write it up in a way that compels belief in a scientifically literate, but possibly canine-naive, audience. In one of the few such papers published to date, which the authors call a “pilot study,” researchers trained eight dogs on saliva or tracheobronchial secretions of SARS-CoV-2 infected patients. In the end they presented 10,388 samples to the dogs and report that they achieved an average 83% sensitivity and 96% specificity.

Impressive as these top-line numbers appear, significant difficulties await anyone trying to scale up canine olfactory surveillance of human populations for SARS-CoV-2. One difficulty: dogs can catch Covid-19, so great care must be taken during training, testing, and eventual deployment not to infect them.

The bizarre and macabre tale of the Danish mink with Covid-19 continues to get stranger. Instead of killing all 15+ million animals on farms in the north of the country, as the Danish government set out to do, they stopped short after culling about 2.85 million animals. The government decided it had overstepped its authority in ordering a total cull. The mink had mostly been buried in shallow graves. This turned out to be a problem: in the natural course of decomposition, the animals’ bodies produced gases that facilitated their rising in the soil of their burial places. Some emerged from the ground. Yes, they are calling them “zombie mink.” There was worry about contamination of water tables. The rising mink may end up being exhumed en masse and burned. One government minister has already lost his job in the debacle and the prime minister is barely holding on. On a positive note, the worrisome strain of mink-bred SARS-CoV-2 that set off the alarm has not been seen since September 15; it may have died out.

Now the reward for your patience: the frippery. This is the most amazing optical illusion. After you click the Play button, be aware that no movement is actually happening in the video other than the two circles rotating. (Here is a direct link in case the embed below isn’t working.) Hat tip to Jason Kottke for this oddity.