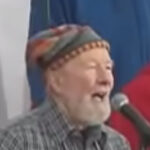 Apologies for not getting out a pandemic Friday Update this week. I was distracted (you can perhaps guess why), incessantly refreshing the Pennsylvania and Georgia vote counts. And yesterday, after the news, I was building a playlist for the day.

This group blog was started in March to capture and preserve a record of our states of mind as we lived into the experience of the pandemic. The political atmosphere has very much been a part of my state of mind — and I expect the same is true for many others — especially as the election approached and then passed with no quick reso­lution.

Saturday was day five of a glorious Indian Summer in Minnesota, with temperatures above 70ºF, which began on election day. Today will be its final day. So I spent much of Saturday with my wife raking and bagging leaves and taking them to the city recycling center; and in between times we found these sounds and songs to act as a soundtrack for the day the US presidential election of 2020 was called.