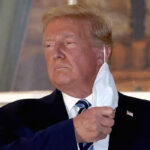 Herewith three items of Covid-19 news you may have missed this week: Neurologic symptoms are common, wrinkles in vaccine distribution, and a tracker for the White House superspreader events. Plus the accus­tomed frippery.

A study in the journal Annals of Clinical and Translational Neurology characterized the prevalence of neuro­logic symptoms in 509 confirmed Covid-19 patients admitted to Chicago-area hospitals in March and early April of this year. A large majority, over 82%, experienced some sort of neurologic involvement at some time during their Covid-19 encounters. Most were mild, with headaches and muscle aches most common, but around one-third of the study’s patients experienced actual changes in brain function (encephalopathy) while ill. Their symptoms included short-term memory problems, confusion, difficulty concentrating, stu­por, and even comas. For those patients with direct brain involvement, regardless of the severity of their underlying respiratory disease, the study shows an association with worse medical outcomes and a higher probability of death within 30 days of hospital discharge.

Stat News has a good survey of the difficulties that we will encounter once a vaccine has been authorized and begins to be distributed, perhaps early next year.

Things will be particularly dicey for distribution if the first vaccine across the finish line is one of the mRNA candidates (Pfizer’s or Moderna’s) that require cold storage. At the moment Pfizer’s looks like it might be first, and its storage requirements are the most extreme: -70°C (-94°F). Almost no one except academic re­search labs and perhaps large hospitals runs freezing equipment at this level. A great deal of dry ice will be required for shipping and storage until the vaccine is ready to be used. And that is only the beginning of the problems a “cold chain” distribution system will uncover.

Other problems we can anticipate: whether pregnant women will be in the test pool (probably not), the dif­ficulty of widespread distribution given the deep cutbacks in airline capacity, and the rigors of keeping the extremely valuable vaccine supplies safe from theft all along the distribution chain.

A week ago The Atlantic also took a detailed look at the chaotic times ahead once vaccines become available.

This web page collects everything that is publicly known, up to date, about all 328 of the White House staf­fers, high-level government officials, and supporters of the presidential candidates who were present at seven events from 26 September to 1 October. The page lists who has tested positive for Covid-19 (37 at this writing), who has tested negative (75), and those for whom the testing status, and in some cases the identity, is not known (216). The only person present at all seven events? The president of the United States.

Thanks for sticking around. The reward for your patience: Part 3 of time traveler Julie Nolke’s “Explaining the pandemic to my past self” video series. Visit my post from June for all three [now four] parts.

October back to June: