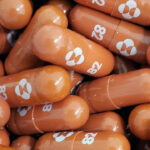 The FDA has issued an emergency use authorization for Merck’s Molnupiravir, an oral antiviral to prevent mild or moderate Covid-19 from progressing to more serious dis­ease, for those aged 18+ for whom other treatment options are not accessible / ap­pro­priate.

With this authorization the FDA has accepted the close vote of its advisory committee, which split 13-10 over whether to go ahead with Molnupiravir.

Molnupiravir carries risks that Paxlovid, authorized yesterday, does not: the former works by altering viral genetic material. For this and other reasons the FDA said in its press release:

Molnupiravir is limited to situations where other FDA-authorized treatments for Covid-19 are inaccessible or are not clinically appropriate and will be a useful treatment option for some patients with Covid-19 at high risk of hospitalization or death.

Here are links to the FDA’s materials.

The course of treatment is similar to that for Paxlovid, consisting of four pills twice a day for five days (40 pills). Treatment must be started within five days of symptom onset.

For the next several months at least, the supply of Molnupiravir will far exceed that of the (superior) Paxlovid. Merck has said that it will have a million courses of its drug available in the next few weeks, more than five times the amount that Pfizer has projected. Merck reportedly has 10 million courses ready to be packaged up and shipped to countries around the world upon wider authorization.

Here is a sampling of the early press coverage of Molnupiravir’s authorization.