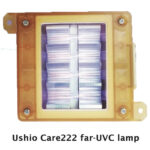 Light at the energetic end of the ultraviolet spectrum has been demonstrated to disable viruses (including SARS-CoV-2) in air and on surfaces, without harming any humans present. Manufacturers of far-UVC light sources are ramping up production.

News of this development made a bit of a splash last June, when the second of a pair of papers out of Columbia University was published. Columbia’s Center for Radio­log­ical Research, headed by David Brenner, had been studying the disinfecting prop­er­ties and safety of far-UVC for half a dozen years when the pandemic took hold.

Brenner was a guest on This Week in Virology episode #666. (The TWiV regulars evinced no knowledge of the mystical significance of this number.) The TWiVers came away impressed by the promise of far-UVC to aid in controlling the spread of SARS-CoV-2 in public places.

Ultraviolet light, invisible to humans, lies at frequencies above (shorter wavelength than) those of visible light. By con­ven­tion it is divided into UVA (nearest the visible spectrum), also called black light or soft UV; UVB; and UVC or hard UV. UVA and UVB from the sun reach earth’s surface, but UVC is blocked by the ozone layer. That’s a good thing, because UVC can penetrate human skin, resulting in sunburn, dead cells, and possibly the beginning of melanoma. UVC also causes cataracts in the eyes.

However, UV light with wavelengths shorter than about 225 nanometers, so-called far-UVC, does not pose the same dangers to humans. Far-UVC cannot penetrate even the layer of dead cells on top of our skin, and it is stopped by the thin layer of tears that covers our corneas. Hairless mice exposed for months to far-UVC light showed no damage whatsoever to skin or eyes.

Hard UV has been known for more than a century to kill bacteria and viruses. Light at a wavelength of 250 nm is commonly used to disinfect dental tools and operating rooms, to give two examples — but always without humans present. What would be excellent in this pandemic (or in any future one) is a light source that could kill viruses and other pathogens in the air without harming humans. Such a source could be installed in elevators, subway cars, airplanes, doctors’ waiting rooms, nursing homes, schools, day-care centers, gyms, restaurants, theaters — the application space is limitless. This is the promise of far-UVC.

Brenner’s lab’s recent experiments with far-UVC have involved measuring its effectiveness in disabling com­mon cold coronaviruses. Experimenting with SARS-CoV-2 itself has not been possible so far because doing so would require a Biosafety Level 3 laboratory. Brenner said such experiments using the live virus are in the planning stages at an appropriate facility.

UV light disrupts viruses by damaging the DNA or RNA they carry. Brenner explained that the most important factor in a virus’s susceptibility to UV is the size of its DNA/RNA payload. Coronaviruses are at the top end of the scale for payload size — their genetic error-correcting machinery enables this. So all coronaviruses are highly vulnerable to being scrambled by UV light. This is why Brenner believes that the harmless coronaviruses used in his experiments are a good proxy for SARS-CoV-2.

Brenner’s team tested the light’s effectiveness against virus contained in all sizes of aerosol particles and droplets. The UV didn’t penetrate far into the largest droplets; but these are the ones that quickly fall to the ground and are mitigated by the 6-foot rule. The light worked well against virus carried in smaller aerosols, the kind infectious disease experts worry about when they use the term “airborne.”

A few companies manufacture far-UVC lamps, but there has been no mass market for them, until now. Sources include glass-enclosed krypton-chlorine excimers, which produce light at 222 nm, and krypton-bromine at 207 nm. No LED-based sources have been invented yet that perform acceptably in this range. One article in a light­ing-industry publication indicated that in 2018 far-UVC lamps cost around $1,000 each. Prices should come down rapidly as companies gear up to mass production. In the TWiV episode, David Brenner estimated that industry would be producing lamps “in the millions” by the end of 2020.

One lighting supplier, Ushio, is selling far-UVC lamp modules filtered to suppress wavelengths longer than 230 nm (pictured above). Ushio has partnered with the large US lighting manufacturer Acuity Brands to in­cor­por­ate these sources into standard LED lighting troffer fixtures. I found another company, apparently a startup, selling krypton lamps with a claimed lifetime of 3,000 hours.

Here is a list of published research on UV light at 222 nm.

You will be hearing much more about far-UVC in the coming months, I guarantee it.