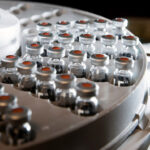 Many people do not want to be associated with anything that has to do with abortion. Of specific interest here is Covid-19 vaccines that involve use of human cells derived from an aborted fetus.

Now, we should be clear that in this case, derived means “based on something that hap­pened 35-50 years ago.” These are cells that have been reproduced for decades from a single cell obtained from an aborted fetus. It is what they call a “cell line.” While ack­now­ledg­ing the time distance, many people still consider those cells to be “fruit of a poisonous tree.”

Why is it necessary to use human cells? Because we don’t know of any other types of cells that will reproduce the SARS-CoV-2 virus. A virus can’t replicate all by itself; it needs to be in a suitable cell for that to happen. The influenza viruses that we get vaccines against each year will reproduce just fine in embryonated chicken eggs and in the MDCK canine kidney cell line, but SARS-CoV-2 won’t. It’s quite possible that in the future we’ll find alternatives — like maybe from bats? — but right now the only known way to reproduce SARS-CoV-2 is in human cells.

Why fetal cells instead of just any old human cells? Because ordinary human cells won’t divide after a couple of months (with some exceptions such as cancerous cells).

The people developing a vaccine have to test their attempts in vitro against the virus, so they need a supply of the virus. The only known way to produce the supply of virus is in human cells. So you can pretty much assume that all Covid-19 vaccines have a link to fetal cells there.

But in many people’s minds, the big question is whether the vaccine is produced using fetal cells, because vaccine pro­duc­tion is an ongoing process that requires large numbers of the cells. The production technique varies depending on the vaccine technology.

Killed-virus and weakened-virus vaccines require producing SARS-CoV-2 viruses in large quantity. Those will (for now, at least) almost certainly be produced using fetal cells. Those vaccines are almost all being developed in China and India, and none is expected to become widely used in the US.

The mRNA vaccines such as Pfizer’s and Moderna’s don’t need to produce viruses: They’re produced using chemical processes, and no cells, human or otherwise, are involved in production.

The manufacture of recombinant adenovirus vaccines (e.g. Janssen / Johnson & Johnson’s and AstraZeneca’s) involves producing viruses, but not SARS-CoV-2. They’re producing an adenovirus that has been gene-spliced with the (mod­i­fied) spike RNA from SARS-CoV-2. You might think, then, that they wouldn’t need to use human cells for pro­duc­tion. But here’s the thing: the produced viruses are designed not to be able to reproduce themselves in your system; they’re known as replication-incompetent viruses. However, they do need to be replicated in the production system. The HEK 293T and PER.C6 cell lines have been modified so that they can automatically produce the additional DNA bits needed to enable an adenovirus to reproduce within those cells.

The protein subunit vaccines (e.g. Novavax’s and Walter Reed’s) don’t need to produce viruses. They do use viruses to produce proteins — spike proteins in this case — but there is no need that those be human viruses. Typically that kind of vaccine will use a baculovirus that infects insects. There is even a version of baculovirus that can infect tobacco cells, so it doesn’t necessarily require animal cells. Not everyone is sure that the proteins produced by non-human cells will be useful, though. Andrea Gambotto, a vaccine scientist at the University of Pittsburgh School of Medicine, says, “Cultured [nonhuman] animal cells can produce the same proteins, but they would be decorated with different sugar molecules, which — in the case of vaccines — runs the risk of failing to evoke a robust and specific immune response.” Novavax uses Sf9 insect cells infected with modified baculovirus to produce their Covid-19 vaccine. It’s unclear what virus and host cells Walter Reed is planning to use.

The bottom line: if this is an issue that bothers you, you might want to pass on the Janssen (Johnson & Johnson) and AstraZeneca vaccines — assuming those eventually do get authorized in the US. The Pfizer and Moderna vaccines, which are currently authorized here, and the Novavax vaccine that is just now entering phase III trials, are as un­tainted as you are going to get.