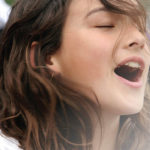 In about 41 minutes, at 5:54 pm, we will go out on our porch and join neighbors in belting out Lean On Me by Bill Withers.

This is the second week of MPR’s Bring the Sing Home initiative (we didn’t hear about last week’s in time). At 5:54 pm CDT the song will be aired live at MPR News, Classical MPR, and The Current, as well as the streaming counterparts of all of those.

We have sent out texts to the block’s SMS network and expect at least two other households to join us.

Perhaps I’ll add photographic or video evidence of the event here — if we end up producing a spectacle worth preserving for posterity.