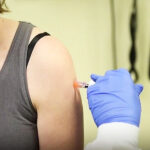 AstraZeneca and Oxford University announced interim results for their vaccine candidate, AZD1222, reporting (via press release) on an interim analysis of 131 cases of Covid-19 among experimental subjects in the UK and Brazil, using two dosing regimes. The more effective dosing showed 90% efficacy.

In the UK the tests used a two-shot protocol with a half dose followed by a full-dose booster in 2,741 subjects, giving 90% efficacy. In Brazil the trial was of a regime of two full doses, and that showed an efficacy of 62% in 8,895 trial subjects. No breakdown of the Covid-19 cases among vaccine and placebo arms was provided for either trial. (Here a full dose represents 5 x 1010 viral particles.)

The ongoing Phase III trial in the US was not part of today’s announcement. That trial uses the dosing regime that was shown to be less effective.

The Guardian newspaper in the UK provided more background to the announcement in interviews with the leader of the vaccine effort, Sarah Gilbert, and its chief investigator, Andrew Pollard at Oxford University. Pollard said:

There is just a hint in the data at the moment that those who got that regime with higher protection, there is a suggestion that it was also able to reduce asymp­tom­atic infection. If that is right, we might be able to halt the virus in its tracks and stop transmitting between people.

The Oxford / AstraZeneca vaccine, although showing lower efficacy than the two developed using mRNA technology, Pfizer and Moderna, has significant advantages over its rivals. It can be shipped and stored at normal refrigerator temperatures, 36ºF to 46ºF; and it costs about $4 per shot vs. $25 for the others. AstraZeneca says that it can provide 3 billion doses worldwide in 2021, triple the amount that Pfizer has promised to produce.

The vaccine candidate will be submitted for early approval to UK authorities, the WHO, and other regulatory agencies around the world (but not, as far as I could find, to the US FDA).

Here is some of the coverage this morning:

[ Note added 2020-11-23: ] Derek Lowe’s take on the Oxford / AZ readout adds some details. One is a link to the Oxford University press release. Another is Lowe’s speculation (that’s all it can be at this point) that the poorer results from the two-full-dose regime may be due to an immune reaction against the first shot of the chimpanzee adenovirus that the vaccine candidate uses as a vehicle. If this theory is right, a full first dose would cause the immune system to attack the second dose more strongly, reducing its effectiveness in stimulating a reaction against the SARS-CoV-2 virus.