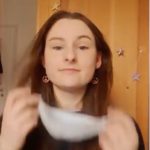 This is a short film (3:20) co-directed by Jacob Jonas and Ivan Cash and scored by Steve Hackman. It melds together intimate, self-filmed clips by people from 30 countries as they isolate from the virus, intercut with musicians performing from sheet music that Hackman wrote and distributed across the world.

The Atlantic hosts the video. It was released on April 15. (Don’t know why it took me almost a week to cross paths with it.)

You can’t watch this film and emerge anything but hopeful.