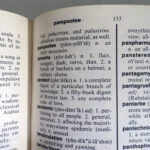 Soon enough you will start hearing a new word: pandemiologist. Google barely knows about it yet.

We have epidemics all the time. Pandemics have been relatively rare — one or a few per century — until about the beginning of the Industrial Revolution, when the curve began to tip upwards. Beginning late last century a confluence of factors has accel­erated the trend: hot zones in Africa, industrial-scale pig farming in China, wet markets selling exotic meats across Asia.

Some epidemiologists, like the U of MN’s Michael T. Osterholm, have been warning for years of the increasing danger of increasingly frequent pandemics. (Here is a report he authored in 2005.)

It won’t be long before those epidemiologists who specialize in pandemics begin to rebrand. You read it here first.